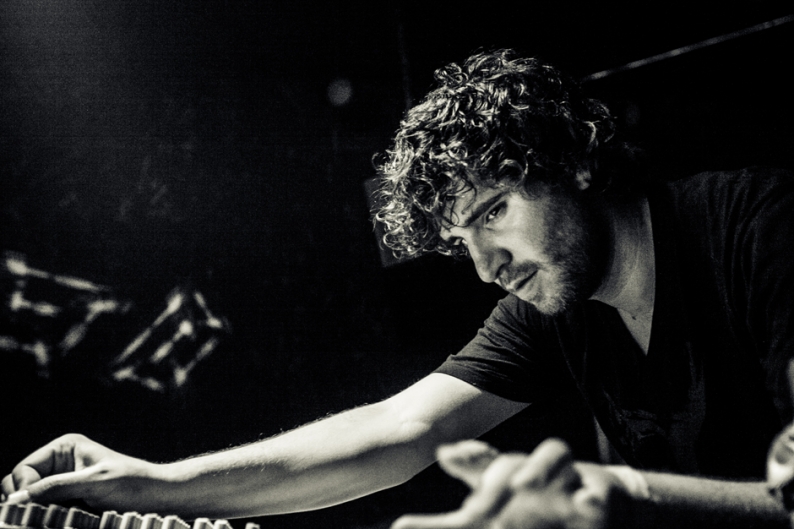 Mathew Jonson Her Blurry Pictures (Crosstown Rebels)
Mathew Jonson likes his techno rippling, rubbery, and slightly bent — full of gracefully arced melodies, twanging analog timbres, and crisp, swinging drum machines — and over the past dozen years the Canadian producer has become a master of rearranging those elements into entrancing new configurations. Sometimes it hasn’t been easy to tell where his signature becomes a formula. His debut album, 2010’s Agents of Time, riffed on his favorite themes in a way that often made the new tracks seem like tangents sprung from old ones, and not always productively. But here, those forking paths lead back to the source of what makes Jonson tick. Her Blurry Pictures is silkier and milkier than anything he’s done before (with the exception, perhaps, of “When Love Feels Like Crying”). He’s eased up on the Middle Eastern melodies and tamped down the edges of the funk, resulting in gracefully corkscrewing percussive fugues and shimmering trance states. It sounds like he’s cruising on autopilot, in the best way — fluid, futuristic, and effortless.

Jordan GCZ “Crybaby J” (Off Minor Recordings)
Off Minor is a new label from Juju & Jordash’s Jordan Czamanski; he kicks it off with a release under a new alias, Jordan GCZ. The name’s a minor mouthful — “Geeseezee” doesn’t exactly roll off the tongue — but the music is anything but difficult, especially when compared to the duo’s exhilaratingly contorted 2012 album, Techno Futurism. It’s deeply nostalgic, from the Moroder-inspired bass line to the aching, Blade Runner lead; by the second listen, it sounds like a song you’ve known forever, and that’s no knock against it. The bass line wraps unevenly around the beat in a way that keeps you from settling in too comfortably, while the keening lead offers weightless emotional transport to another dimension, and those soft, sunrise pads ascend like an ecstasy-glazed stairway to infinity. If “Crybaby J” is a self-portrait, let’s hope he never turns his back on his sensitive side. Pass the tissues.

Slackk Failed Gods EP (Local Action)
Speaking of crybabies, how about that Slackk? That might sound like an odd characterization for a grime producer who makes tunes like the crashing, clanging “Shogun Assassin,” one of the six cuts on his new EP for Local Action. Distorted snares, gun-cocks and gunshots, wild flanging and phasing — it’s as brutal as grime gets (and would make a pretty great battle soundtrack for Game of Thrones). “Algiers” is almost ahedonic, summoning the same kind of nervous numbness as Wiley at his iciest. But other cuts on the record strive for almost soap-operatic levels of breast-beating emotion: “Empty Bottles” sounds like the saddest video-game soundtrack in the world, and “Silk Robe” applies trap-rave kinetics to a New Age healing ceremony. “Room Made Vague” is an airy Sino-grime koan, all skeletal beats and open-ended tones, while “Jackpines” is a beatless contrapuntal miniature that makes no secret of its weepy disposition. (A release date should be announced in the next week or so, pending approval of the record’s test pressings.)

The Durian Brothers / Ensemble Skalectrik, Split Series #22 (FatCat)
The Durian Brothers are up to their usual tricks on the latest EP in FatCat’s split series — which is to say, some very unusual tricks indeed. The members of the Düsseldorf trio use sequencer, effects, and prepared turntables (at least one member is also a part of Institut Für Feinmotorik, a group that sources all its sounds from “empty” turntables prepared with rubber bands, paper clips, etc.) to sculpt wild, polyrhythmic fantasias. There’s less of the thumping kalimba that used to give their music its resemblance to a dubbier, freakier Konono No. 1, but “Unterirdisch” still looks to Africa for inspiration, with faint echoes of highlife and even Kenyan “dry” guitar. “Angstbirne” whirls like a twister through North African and Middle Eastern tones, and “Staatsqualle” finds them at their most abstracted, with scratchy, loping grooves underpinning misty, tremulous drones.

On the other side, Ekoplekz’s Nick Edwards adopts his Ensemble Skalectrik alias and stakes out a position somewhere between Cabaret Voltaire, Philip Jeck, and Demdike Stare for four tracks of improvised play with loops, samples, and humid, skunky effects. He takes in haunted dancehall (“Winslow”), dot-matrix dementia (“Outer Phase”), and DMT-fueled jungle (“Powertranz”), while “Pharos Groove,” which SPIN is premiering below, is a comparatively laid-back journey into sandblasted nyabinghi. It’s a brilliant pairing: the artists complement each other like two sides of a very tarnished coin.

Lone, “Airglow Fires” (R&S)
Lone’s new single, “Airglow Fires,” is expansive as hell, billowing with choral pads, DX chimes, and jazzy chord stabs that thumb their nose at the rhythmic grid. As far as I can tell, it’s actually an eight-bar progression, but it saunters all over the beat in a way that makes it exceptionally hard to parse; better to just give yourself up to its whims. (That incredulous vocal sample, “What?,” is in there for a reason.) But beneath the trickiness, the whole thing boils down to something much simpler: A delivery device for a single sound. It’s just one note in that swinging, stumbling bass line, but it positively leaps from the speakers every time it’s played, threatening to swallow up everything in its path and reducing subwoofers to a trembling mess.