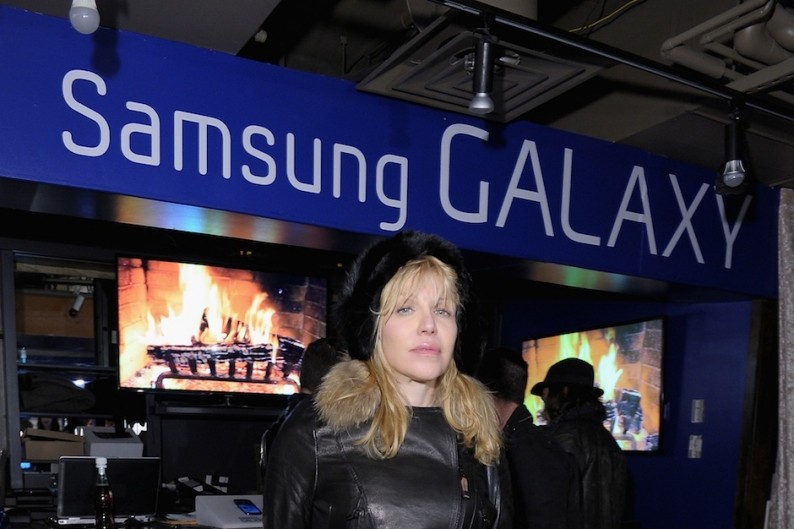 Courtney Love has gone from Hole to Hova. The singer told Huffington Post she gave Jay-Z approval to quote lyrics from Nirvana’s “Smells Like Teen Spirit” on his upcoming album, Magna Carta Holy Grail. She explained that while the rapper’s camp used the lyrics first and asked for permission later, “which is kind of nervy, the business side is taken care of so it’s fine.” She also said this: “Jay-Z’s huge and we’re friends. I mean we’re not besties or anything…”

Kurt Cobain’s widow’s not-quite-bestie is set to release Magna Carta Holy Grail on July 4 via a Samsung Galaxy app. Billboard recently weighed in that the million album copies Samsung bought to give away to its customers will not count toward its top 200 albums chart. Maybe not coincidentally, Jay-Z anwered a question about “Smells Like Teen Spirit” in a 2012 coffee-table book by Pharrell. Nirvana “stopped” hip-hop for a second, Hova told Skateboard P at the time.

Love is on solo tour right now. She’s also planning a new album, potentially titled Died Blonde. According to HuffPo, the album ought to arrive by Christmas, when Love also aims to deliver an autobiography. And what label might release Love’s long-played, do you ask? Why, an indie label, of course: “Look at Queens of the Stone Age and Matador,” Love said. “If you were to tell me in the past that Matador would have a Number 1 record, I would’ve laughed.” Not sure whether that helps or hurts her chances of getting signed by Matador, but at least it sounds like she’s got the right idea.