Macklemore and Ryan Lewis continue to torture us all 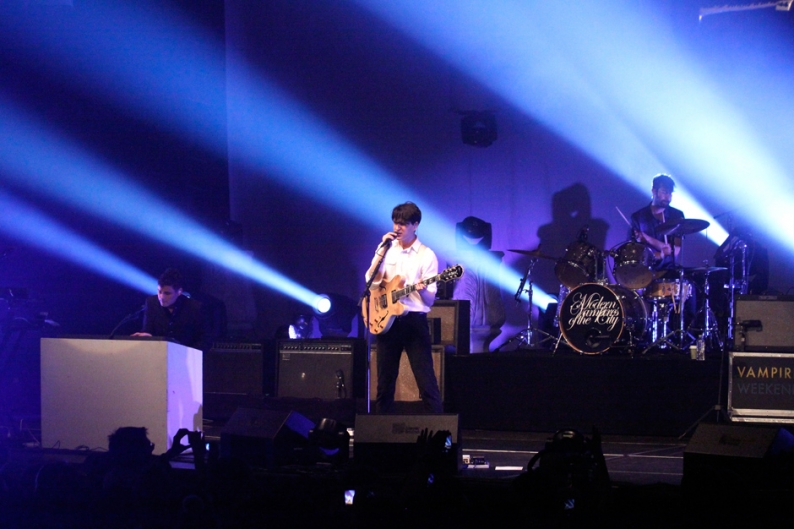 First! Cue the streamers, it’s Vampire Weekend! The prep-pop champs scored their biggest sale day to date with their new SPIN Essential Modern Vampires of the City, moving 134,000 units according to Nielsen SoundScan and, duh, scoring the No. 1 slot on the Billboard 200. By comparison, 2010’s Contra also bowed at No. 1 but sold 10K fewer copies — reason enough to pop a chilled can of Aranciata and celebrate. Better still is the news that this is the 19th independently released and distributed album to dominate the Top 10 since the chart began using SoundScan in 1991. Go ahead, don some bleeding madras and do a little kwassa kwassa for the boys.

2 to 10: There are, at best, two more albums that you care about in the rest of the batch. The Great Gatsby soundtrack (No. 4 with 95K), which is a far better proposition as a decorative item if you can spare the heavy sugar, and Justin Timberlake’s The 20/20 Experience (No. 7 with 44K) — a lovely record that deserves all of the good things even if we’re getting a little tired of talking about it every week. Do you like George Straight? We suppose you’re allowed that — his Love Is Everything is in at No. 2, 120K — but from there it’s all bad news: Demi Lovato’s Demi nabs No. 3 (110K), Lady Antebellum grabs No. 5 (56K), that Now 46 bullshit wastes a perfectly good No. 6 slot (52K), Michael Buble’s To Be Loved snatches No. 8 (40K), Pistol Annie’s Annie Up does No. 9 (30K) and Blake Shelton’s Based on a True Story tacks on at No. 10 (28K). Please tell us people are mistaking that last one for the 2 Chainz album.

Deft Punk: Those lovable ‘droids in Daft Punk score their first Top 10 song victory with the Pharrell-featuring “Get Lucky.” Believe it or not, the electro-house gurus have only had two previous hits on their hands: 1997’s “Around the World” and 2001’s “One More Time,” each of which peaked at No. 61. Their last long-player, 2005’s Human After All, made it no higher than No. 98 on the albums chart, but the SPIN Essential’d Random Access Memories should do far, far better. Meanwhile …

Please Stop: Macklemore & Ryan Lewis remain atop the Hot 100 for the bazillionth time in a row for their trillionth chart-slaying single “Can’t Hold Us” to which we say, a million times: