Band confirms liver disease as cause of death 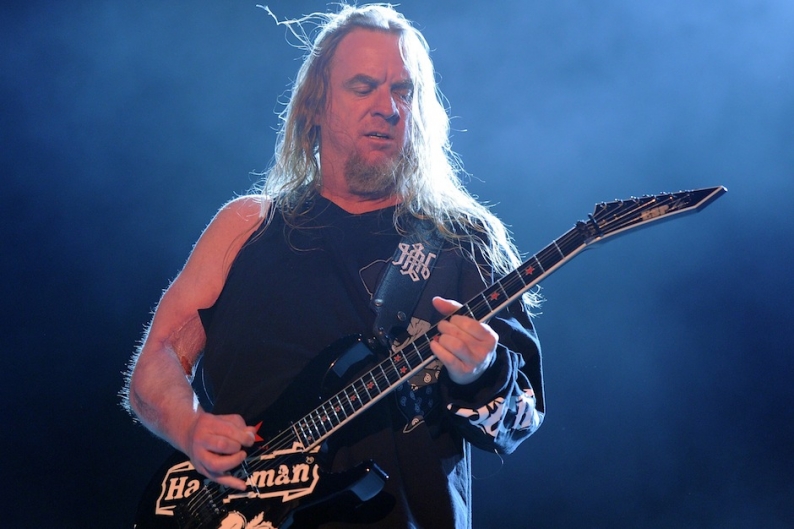 Slayer guitarist Jeff Hanneman’s death last week from liver failure was caused by alcohol-related cirrhosis of the liver, the band has confirmed. Hanneman, who was 49, co-founded the California thrash-metal institution with fellow guitarist Kerry King in 1981. The pair’s rampaging fretboard assaults jointly earned them a high ranking on SPIN’s 100 Greatest Guitarists of All Time.

In a Facebook post, the band says Hanneman and his confidantes didn’t learn the severity of Hanneman’s liver disease until recently, though he suffered flesh-eating disease from a spider bite on his arm in early 2011. He was not in line for a liver transplant and it had appeared he was getting better, the band writes. Read their full update on Hanneman’s cause of death below:

We’ve just learned that the official cause of Jeff’s death was alcohol related cirrhosis. While he had his health struggles over the years, including the recent Necrotizing fasciitis infection that devastated his well-being, Jeff and those close to him were not aware of the true extent of his liver condition until the last days of his life.  Contrary to some reports, Jeff was not on a transplant list at the time of his passing, or at any time prior to that. In fact, by all accounts, it appeared that he had been improving – he was excited and looking forward to working on a new record.

The Facebook post also included anecdotes with Hanneman from King and singer-bassist Tom Araya. “I had so many great times with Jeff,” King writes. “In the early days when we were out on the road, he and I were the night owls, we would stay up all night on the bus, just hanging out, talking, watching movies… World War II movies, horror movies, we watched ‘Full Metal Jacket’ so many times, we could practically recite all of the dialogue.”