She appeared okay after R&B singer crashed on her head 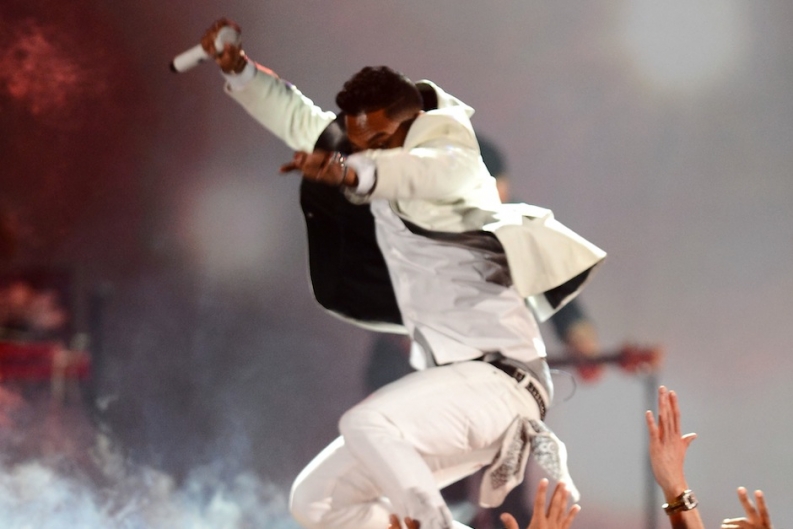 Miguel’s SPIN Essential album Kaleidoscope Dream is suffused with sex, but what happened during the R&B singer’s performance last night at the Billboard Music Awards was something else. While singing hit song “Adorn,” Miguel tried to jump to a different onstage platform and wound up accidentally crashing crotch-first on a female audience member’s head, his knees pressing her down onto the flooring. It looked like this:

According to the Hollywood Reporter, others in the crowd nearby were shocked and dismayed, but Miguel soon brought the woman out for a live-stream interview and she appeared to be fine. “Rocknrollmademedoit,” Miguel tweeted. Earlier, he wrote, “got caught up in the moment, thank goodness Khyati is okay.” The victim of Miguel’s leap of faith can be seen smiling and laughing in a GIF from the live-stream interview.

Prince, Nicki Minaj, Lil Wayne, and Icona Pop also performed at the Billboard event, and you can watch their performances below. For those keeping track, Taylor Swift was the night’s big winner on the strength of her album Red, winning eight trophies. Gotye and Rihanna also did well — Rihanna in the R&B category, where she rarely charted before Billboard shook up its methodology last year in a way that lets big pop stars dominate genre charts more easily.

But the real highlights weren’t the performances or the awards. Along with Miguel’s mishap, Justin Bieber was responsible for a couple of the evenings more memorable moments. Accepting one award, Bieber gave a speech that drew some boos, according to THR. The gist was something like Kanye West’s recent anti-paparazzi tirade, except delivered by a 19-year-old who has certainly benefited from lowest-common-denominator media coverage at least as much as he has been hurt by it.

Bieber said: “I’m 19 years old. I think I’m doing a pretty good job. And basically, from my heart, I just really want to say it should really be about the music. This is not a gimmick. I’m an artist and I should be taken seriously, and all this other bullshit should not be spoken of.”

Swift, asked later about Bieber’s award, reportedly said, “Can we have another question, please?” She was seen side by side with Bieber’s ex, Selena Gomez, at multiple points throughout the night. Which brings us to the other greatest GIF from the evening, via Gawker: Swift sticking out her tongue when Bieber embraces Gomez. Could this be the beginnings of a new Taylor Swift song?