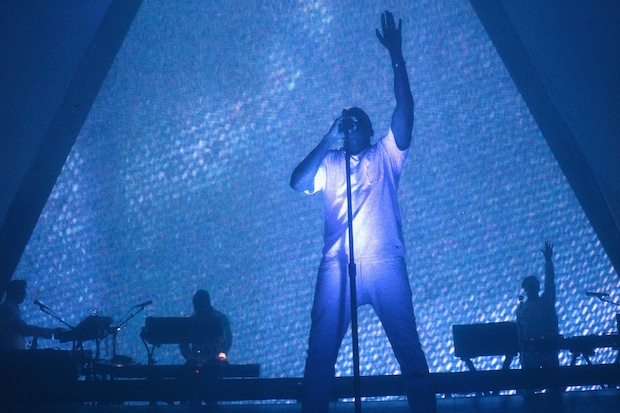 Last night’s Adult Swim upfront party at New York’s Roseland Ballroom quickly transformed into a full Kanye West show where the rapper previewed material off his upcoming sixth album. The first new track Hudson Mohawke had debuted in Warsaw last weekend — the one with the soon-to-be infamous “black dick in your spouse again” lyric. ‘Ye only rapped one verse, but the song nonetheless indicates that there will definitely be dance beats on the album, and this particular one sounded distorted and aggressive, like a patch of EDM smoothed over but still rough around the edges. West transitioned into the song immediately after “Mercy” and “Cold,” recent tracks where his rapping is fiery and gleefully indignant. This newest track is in that lineage, but with a twist on the sound.

The second new song is colloquially being called “Baby, You’re Awesome.” It’s a very spare piano ballad that at times borders on spoken word. West bathes his voice in layers of Auto-Tune as he sing-talks to Kim Kardashian in what is easily his most naked ode to his lady yet. The song may be the most divisive thing West has ever done, but there’s a true, intense power in a track so aggressively unflinching in its devotion to a relationship that has become its own tabloid cottage industry. Even the repetitive lyrics — West says “awesome” at least two dozen times — have a certain dumbstruck sweetness to them. The track is the flip of “Runaway” — Kanye’s toast to the assholes — but instead of building up a myth, “Baby, You’re Awesome” simmers with sincerity.

Those two newbies pocked a set that ran well over an hour. West spent the entire show in the center of a pyramid that projected images around him — at times he was essentially entombed by found footage of birds and ancient busts while being further smothered by smoke that constantly billowed from the contraption. Despite being no more than 15 feet away, he felt untouchable and deep inside a world of his own creation. Even his “rant” — yes, he ranted, about paparazzi and celebrity — felt canned, as if it was being read by a robot re-creation of a Kanye that had perished deep in the solar system. He half-heartedly broke out hits like “Good Life” and “All Falls Down,” but put much so much more verve into songs that can alienate, like his extended improvised version of “Runaway.”

Nonetheless this feels as interesting a time to see Kanye West as there’s ever been. He has turned live rap into high art — it felt almost false to see this spectacle at a venue like Roseland, which sits just a few blocks from Times Square, America’s monument of tastelessness. It can be overwhelming to take it all in, to even attempt to level with what he has become — the one-time most relatable rapper in the world who is now the living figment of his own imagination. He has morphed into an entirely different capital-A artist in even just the last 18 months, for better or for worse. Objectively speaking, though, he’s doing things no one in the history of rap music has ever even attempted.

Jordan Sargent
Tags: Kanye West, We Were There