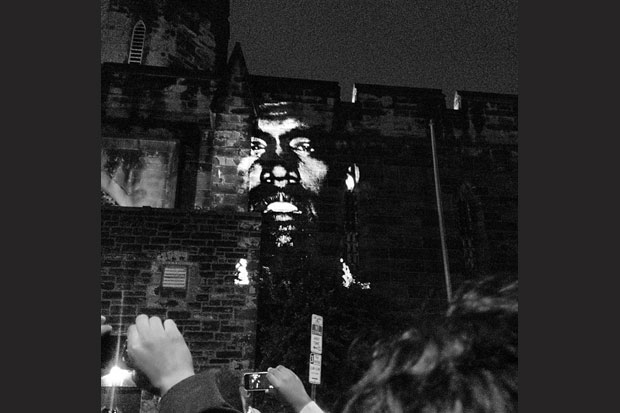 The second weekend of Kanye West’s “New Slaves” projections is underway, occurring in 22 additional cities, beginning last night. Though the projection was the same as the one premiered last week, there remains a significant attraction to witnessing it in person, at least for videographers/photographers. Amateur video has already starting appearing on YouTube from Friday’s Amsterdam showing. In this one, you can hear fans enthusiastically rapping along to the song; and this documentary-like clip captures the excited crowd, waiting around for the projection to begin. West continues to refine the event-rap grandeur that he’s been developing for a few years, but now with an IRL viral, flashmob appeal.

On Friday night, “New Slaves” was projected in Philadelphia, Atlanta, Houston, and Tucson. The Philadelphia projections were worth noting, in particular, because of their location: West’s face appeared on two museums, the Franklin Institute and the Barnes Foundation, making explicit West’s high-art, art-rap aspirations for his music, and then another projection appeared at the Eastern State Penitentiary. The penitentiary is no longer in use as a prison, and now operates as a museum and historic site. Eastern State also has ghost tours around Halloween called “Terror Behind the Walls.” By projecting “New Slaves” on the side of a former prison (that has been turned into a cool tourist destination for the whole family), West certainly highlights the message of a song about how lightly we take incarceration and the prison-industrial complex. “New Slaves” projections will be happening all weekend. A map on West’s official website reveals locations and times.

UPDATE: According to the Houston Chronicle, police shut down the Rothko Chapel screening of Kanye West’s “New Slaves” last night. Fans at the chapel to watch the projections were threatened with trespassing tickets. Ultimately, all three of the Houston screenings (the other two were at the Central Library and the George Bush Monument) were cancelled. According to the Houston website Day and a Dream, cancellations sent Kanye fans to the other locations, adding to the chaos. “Technical difficulties” seemed to delay the library screening, but later on, it was cancelled altogether. Additionally, Day and a Dream suggests a hovering police presence throughout the night: “Patrol cars had been flying by the library all night batting an eyelash to the crowd of people on the sidewalk but finally upped patrols around 12:45.” Understandably, local police probably hate big deal rapper-fueled pop-up events because they’re just a big headache, but given the lyrical content of and buzz over “New Slaves,” the possibility of something more nefarious about these police shutdowns doesn’t seem entirely out of the question.