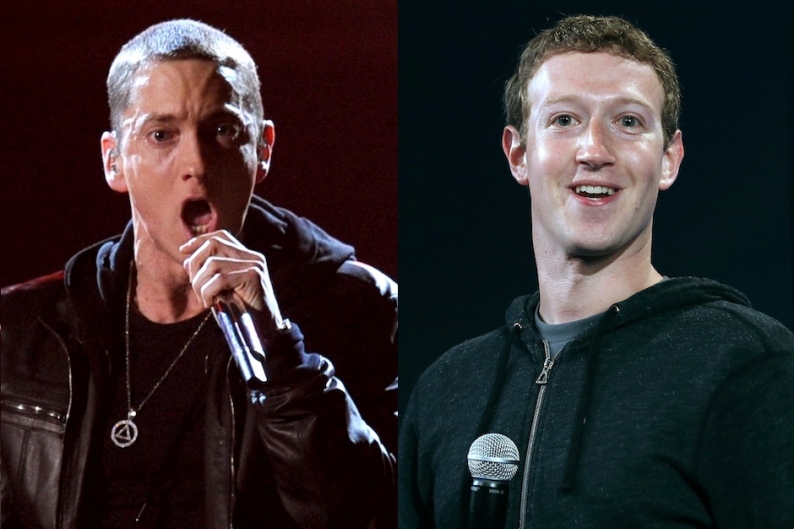 After the movie The Social Network and extensive profiles in magazines like the New Yorker, you might’ve thought you knew all there was to know about Facebook founder Mark Zuckerberg. Last month, though, tech blogs such as Gizmodo reported the discovery of what appeared to be a teenage Zuckerberg’s 1999 website. Here’s how the “About Me” page starts: “Hi, my name is… Slim Shady. No, really, my name is Slim Shady.”

Zuckerberg’s youthful Eminem stan-dom has now come back as evidence in a copyright-infringement lawsuit filed against Facebook by the real Slim Shady’s music publisher, Eight Mile Style. As posted by the Hollywood Reporter, the lawsuit claims a Facebook ad wrongfully used music “substantially similar” to the track “Under the Influence,” off of hugely successful 2000 album The Marshall Mathers LP. According to the lawsuit, which specifically cites reports of Zuckberg’s childhood Web page, the advertising agency W+K used the music “in an effort to curry favor with Facebook by catering to Zuckerberg’s personal likes and interests.”

Eight Mile Style, run by Marshall Mathers along with his producers Mark and Jeff Bass, further claims that Facebook later changed the music in its ad. The lawsuit charges that this switch-up constitutes “an admission that Facebook knew it had infringed” on the track, which was a collaboration between Eminem and D12. The music publisher argues that tweaking the music isn’t enough for Facebook to avoid copyright infringement, because Eight Mile Style owns all works “derivative” of Eminem tracks. Eight Mile Style is seeking the maximum damages available under the law, or as much as $150,000 per infringement.

Facebook didn’t respond to THR’s request for comment. The lawsuit alleges that a reply from lawyers for the defendants “was brimming with bellicose language and replete with factual inaccuracies.” Those lawyers, according to Eight Mile Style, attacked Dr. Dre even though he didn’t produce “Under the Influence.” According to the complaint, the defense lawyers argued that “Under the Influence” is actually stolen from Michael Jackson. (Forget the Winklevoss twins. We’re pretty sure the idea for Facebook came from the King of Pop.)

Eminem isn’t much easier to best in court than he was in Detroit rap battles. In 2009, Apple settled with Eight Mile Style over a different copyright-infringement lawsuit. Last year, Universal Music settled with FBT Productions, the producers who discovered Eminem, in an influential digital-revenue case. Guess there’s a Slim Shady lawsuit defendant in all of us.

As for Eminem, contrary to online rumors, he wasn’t stabbed. He’s set to headline Belgium’s Pukkelpop festival on August 15, among other scheduled gigs. And his next full-length, one of our 50 Albums You Gotta Hear in 2013, is supposed to come out after Memorial Day, a.k.a. this weekend. If Eminem’s lucky, his Recovery follow-up could make the “best” list on Zuckerberg’s childhood website.

Facebook’s offending ad — the allegedly altered one — is below.