Drake’s ‘Nothing Was the Same’ Track List Is a Big, Fat Fake

Fake hype machine refuses to rest, even on Memorial Day 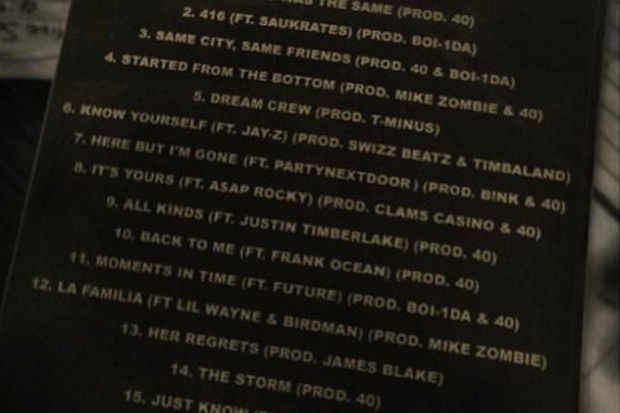 With albums by Justin Timberlake and Daft Punk in the rear view and Kanye West’s Yeezus rapidly approaching, it looked like 2013 was all locked up to be the Year of Surprise Superstar Album. But developments on Memorial Day suggest that this year could be remembered as something else: the Year of the Fake Track List. An uneventful holiday weekend — from a music news perspective, at least — was briefly turned on its head Monday afternoon when an authentic-looking track list for Drake’s forthcoming album Nothing Was the Same began to float around Twitter. According to Vibe, the origin story went like this: Drake’s dad posted a photo of the track list on Instagram before deleting it, but not before it was screencapped by quick-trigger Internet sleuths. According to the picture, Timberlake, Frank Ocean, Future, and A$AP Rocky all feature on the album, with production credits from Timbaland, Clams Casino, and James Blake.

The photo showed the track list printed on a placard that resembles the menu at a very expensive restaurant, and featured just enough bait (from underground OVO affiliate PARTYNEXTDOOR to underrated rap producer Bink to two artists — Ocean and Blake — playing this year’s OVO Fest) to seem believable. But, of course, it’s a fake — which was confirmed by frequent Drake collaborator Boi-1da and Rap Radar’s Elliott Wilson:

And that was that. Yes, someone took the time to print out an embossed Drake track list of their own imagination. Of course, this comes in the wake of someone’s meticulously Photoshopped iTunes pre-order page for West’s new album, which itself followed a fake track list leak of a nonexistent West album called Rich Black American. All of which was predated by a fake track list of Beyoncé’s new album that was “accidentally” tweeted by a member of Stargate. That one purported that B’s album would begin with a song called “Ratchet” featuring Lady Gaga and Azealia Banks.

Remember when these things used to be funny?