Daft Punk Materialize to Promote a Racecar (and Presumably Their Album) 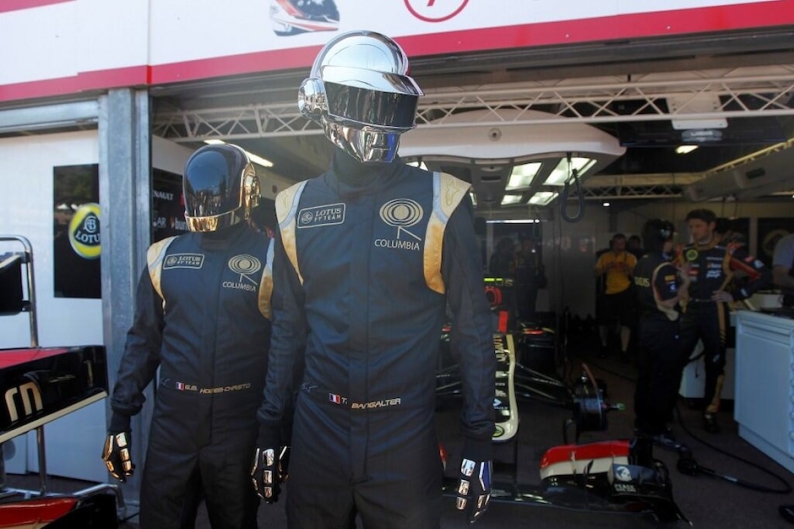 Daft Punk continue to put all other viral marketers to shame. It helps they have the album, Essential Random Access Memories, to back it up. The extensive buildup to the record is finally over, but the LP’s release last week hasn’t put an end to the group’s unconventional promotional stunts.

As Pitchfork notes, Columbia Records has teamed up with Lotus F1 Team, a Formula One racing team associated with the British sports car maker Lotus. Perhaps not coincidentally, Lotus F1 Team raced at Le Grand Prix de Monaco over the weekend with a Daft Punk logo emblazoned on one of their racecar’s hoods. As the team’s Twitter account documented in photographs, two guys who sure appeared to be Thomas Bangalter and Guy-Manuel de Homem-Christo showed up in robot suits to mark the occasion.

For what it’s worth, Daft Punk’s support didn’t help their car “Get Lucky”: As the Guardian points out, Lotus driver Romain Grosjean had to quit the race after 63 laps, following a collision. The other Lotus F1 driver, Kimi Raikkonen, finished 10th.

So Daft Punk may not have won at the racetrack this weekend, but they continued to heighten their mystique. Just as Random Access Memories threw the gauntlet down on the electronic dance music-makers who’ve followed them, the racecar stunt makes it that much harder for future viral wannabes to one-up the masters. If nothing else, Swedish House Mafia’s recent commercial for a mere non-racecar looks small by comparison. What’ll be next, a spaceship?