'Giorgio by Moroder' is not a new brand of fragrance 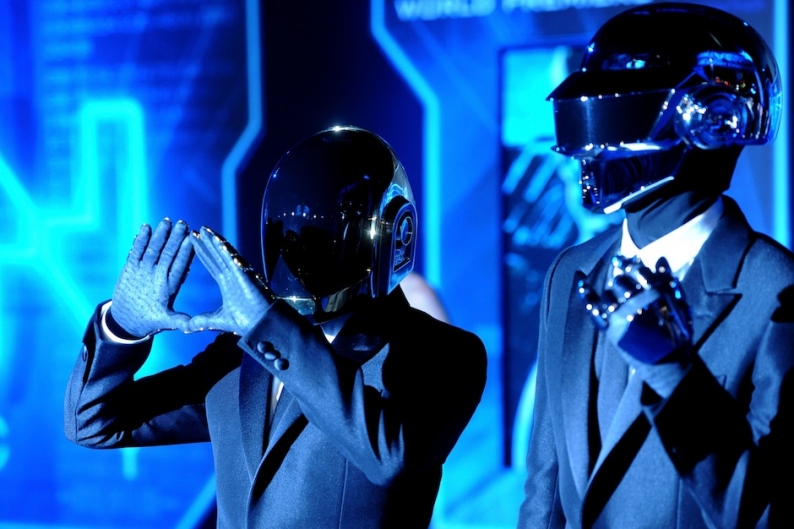 It’s an eventful day for the men in the robot masks. Daft Punk’s new album Random Access Memories isn’t out until May 21, and so far the French electronic dance music blueprint-setters have released only one advance track, “Get Lucky,” their disco-callback collaboration with Nile Rodgers and Pharrell (an early version of album closer “Contact” has apparently emerged in an online recording of a 2002 DJ set). But Daft Punk have confirmed that the album’s other guests will include the Strokes’ Julian Casablancas, Animal Collective’s Panda Bear, “Rainbow Connection” songwriter Paul Williams, piano man Chilly Gonzales, house luminary Todd Edwards — and Italian disco legend Giorgio Moroder (see also: Donna Summer’s “I Feel Love”).

Well, now Italy’s Electro Italia got its hands on Daft Punk’s track with Moroder, titled “Giorgio by Moroder.” The recording appears to have been taken at a listening session for the album, but you can clearly hear Moroder speaking in stops and starts about the origins of electronic music, at one point over just a click track. Then a section of sleek, silvery synthetic pulses begins, joined by jazz-inflected electric piano. The full track is reportedly much longer, and the sound quality will surely be better, too. But the weirdness here is beguiling. And then the beguilingness is. Listen over at Electro Italia.

Meanwhile, tongues are flapping about Daft Punk’s potential live plans. According to the New York Post, Pharrell has said he’ll be touring with the duo “next year.” A rep for the group has denied that plan. And Daft Punk’s Thomas Bangalter previously told Rolling Stone that while Daft Punk “have no current plans” to perform Random Access Memories live, the robots would take the stage again eventually.

In other Daft Punk-related weirdness, they’ve been interviewed, randomly enough, by eclectic-minded pop singer Sky Ferreira, for CR Fashion Book. Idolator has pulled out the choicest snippets, including this dis of the EDM movement the group helped spawn: “Computers, as music instruments, are making it difficult for musicians to have their distinctive sonic personality, and a lot of dance records are starting to sound the same, in a very formatted way.”

Daft Punk also told the “Everything Is Embarrassing” phenom their favorite part of recording Random Access Memories was the studio time with Rodgers, “one of our heroes.” As FACT points out, Rodgers has told French magazine Les Inrocks that a new Chic LP made up of “Cassette recordings and demos that were never released” is due “out soon.” Rodgers is also quoted as saying that he once turned down (!!!) a collaboration request from Miles Davis — who, come to think of it, would probably have loved Daft Punk.