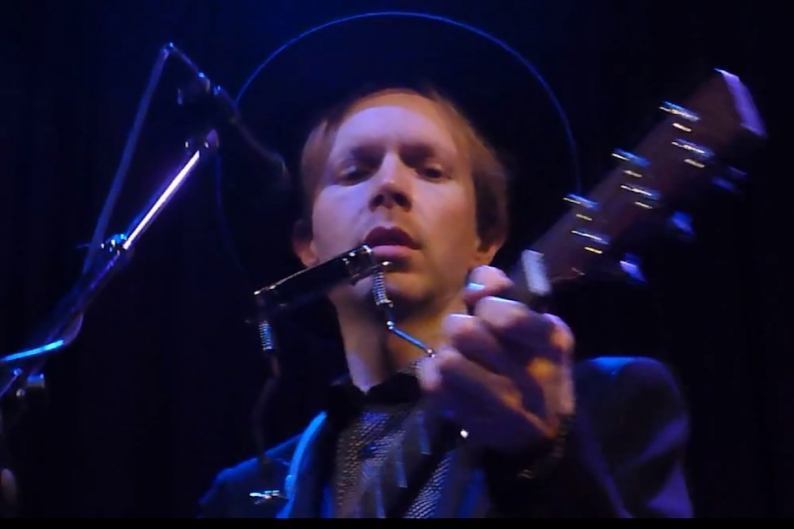 Beck has wasted no time previewing new material live. Last night at the Rio Theatre in Santa Cruz, California, he performed a few previously unreleased songs, plus material from last year’s Song Reader sheet-music collection, a George Jones cover, and a wide-ranging assortment of material from throughout his career. The show was the first in a handful of acoustic and electric dates Beck has scheduled in the next few months, most recently including Montreal’s Osheaga Festival and a Song Reader-themed London event with Jarvis Cocker, Franz Ferdinand, and other high-profile guests.

The Odelay singer and songwriter played in a stripped-down setting, based around acoustic guitar, harmonica, and piano. He introduced “She Thinks I Still Care,” by recently deceased country great Jones, as a song by someone who set “the high watermark” for singers. The set also included a cover of late Big Star singer-songwriter Chris Bell’s haunting “I Am the Cosmos,” plus playful snippets of Tom Petty’s “Free Fallin’,” Elton John’s “Bennie and the Jets,” and the Digital Underground’s “Humpty Dance” (!). His backing included longtime collaborator Justin Meldal-Johnsen, who has worked as Nine Inch Nails touring bassist and more recently produced albums for the likes of Paramore and Tegan and Sara.

The first new song Beck performed, which fans are calling “Don’t Let It Go,” was a powerfully melancholy number he introduced by saying, “Here’s one we haven’t played before.” Later in the set, Beck played a couple of songs fans are calling “Unforgiven” — an echo-soaked dirge backed with drum machine — and the ringing, folksy “Morning,” both of which also show no online traces of having been performed previously. It’s unclear whether the songs will be on Beck’s upcoming acoustic record, but if they are, it’s shaping up to be a promising album.

Download a fan recording of the full set over at Chonk. Watch video of Beck performing Song Reader’s “Sorry” and “Heaven’s Ladder” below.