No Trivia’s Rap Songs of the Week: Action Bronson Is About to Get His Axl Rose On 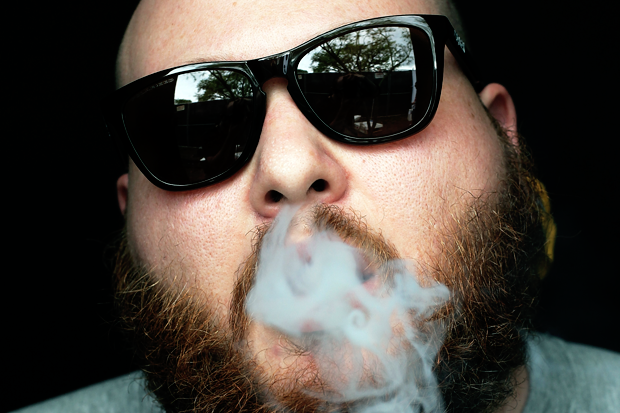 Ab-Soul – “Back Then”
In which Ab-Soul, one of XXL’s 2013 Freshman (even though he’s been flirting with the mainstream going on two years now, and is bros with everybody’s big-time rap hero Kendrick Lamar), bleats over a skittering, half-evil Harry Fraud beat that nods to both exploitation movie synth-trash, and throbbing strip-club bangers. “Back Then” makes a case that Ab-Soul, the most eccentric Black Hippy member, could become a radio-friendly rapper run amok. Between this and Ab’s appearance on Chance the Rapper’s “Smoke Again,” is he molting into some kind of weirdly nimble booty-club lyricist? Wale, watch out! Also, DJ Drama stays winning with the one-liner ad-libs, declaring, “I figured out my problem, I’m addicted to new shit,” inadvertently diagnosing an entire generation of Internet-scouring rap nerds glued to their MacBook Pro with Retina display, downloading music forever and ever and ever.

Action Bronson – “November Rain”
In which Action Bronson, one of XXL’s 2013 Freshman (even though he’s been flirting with the mainstream going on three years now and is bros with seemingly every real hip-hop XXL hero) raps over the hammy chords of Guns N’ Roses’ “November Rain” because he can. Produced by Party Supplies, responsible for Action’s best and most rickety mixtape, Blue Chips, this one begins with Action coughing over GNR’s ponderous intro and only gets weirder. Realize that this is what Action Bronson decided to hand over to XXL and DJ Drama for the official freshman mixtape: A lightweight loop of the strings and all the rest of this big dumb “epic” power ballad, saddling it with raps about hiding drugs inside of a dog’s asshole. Better yet, the track just peters out, in the best, most dismissive way possible with Bronson, kind of out of breath, laughing at his own inability to keep going.

Gene the Southern Child – “Roll”
Here’s a mean-mugging anti-snitch rap that’s just plain good and ignorant (“There’s bitch in your blood / Your heart pump pussy juice”); it builds and builds for three-plus minutes with Muscle Shoals, Alabama, MC Gene the Southern Child breathlessly rushing through multiple verses and always landing on an off-to-the-side catchy hook without nodding to its virtuosity, or much else, for that matter. This is head-down gangsta rap, and we need more of that. Strangely, though, it all climaxes with a sample of Australian crooner Peter Allen’s nerdy, all-camp-everything, Scott Walker-like wail. It’s eerie and ridiculous and inexplicably kind of scary. Like, Peter Allen appearing on the last minute of a hard-as-nails rap track is far more horrifying and menacing than Gene talking shit about how he’s going to kick your ass for the first three minutes.

Scotty – “Food For Thought”
When Atlanta rapper Scotty’s 2011 mixtape Summer Dreams arrived, it was just the latest nicely contained little rap expression to appear on the Internet, seemingly out of nowhere. Two years later, Scotty is assisted by the next notable rap movement: This know-it-when-you-hear-it thing called “New Atlanta,” fronted by broccoli-haired oddball Trinidad James (who appears along with Big K.R.I.T. on “GAME”) and including guys like Rome Fortune, Sean Falyon, and producer Childish Major. Previously, Scotty came off like a nostalgist backed by DJ Burn One’s A-student country-rap beats. That worked. On F.A.I.T.H., though, he converses with the contemporary rap world, letting the drums snap and clap like trap, as the sinewy sounds of R&B creep in there. Intro/explanatory track “Food for Thought” bottles up the pissed-off, something-to-prove fervor of T.I., and the scrappy underdog rage of Rich Boy, setting the tone for this very good yet very modest mixtape.

suicideyear – “Birthday”
Due to that recent eBay vulture craziness surrounding Boards of Canada’s “mysterious” Record Store Day release, I revisited Geogaddi and realized that, well, with its kinda-clunky and totally unnecessary drum programming thumping through those delightful swirls of ’70s film-strip synth tones, it’s pretty much a cloud-rap instrumental hip-hop album a decade too soon. How retrolicious would it be if some rapper decided to rap over the whole damn thing? Who will it be? Antwon? Fiend? Lil B has, of course, already rapped over Boards’ “Olson (Version 3)” and “Farewell Fire,” because he’s cool like that. Or maybe one of those guys should just jump on this instrumental from the very B.O.C.-like producer suicideyear. “Birthday,” off his mixtape Japan, bats around the first few atmospheric moments of Fleetwood Mac’s “Little Lies” (all the way up to the moment when those gated drums come crashing down), adding footwork gulps and lo-fi trap-enough drums. Why the hell not?