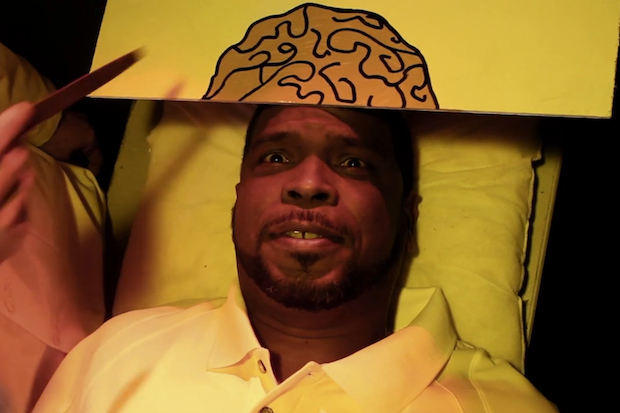 The world of bass-pounding, First Amendment-challenging Miami rap music and experimental film do not get to meet up all that much. But thanks to directors Jillian Mayer and Lucas Leyva and their short, Life and Freaky Times of Uncle Luke, you can witness 2 Live Crew frontman Luther Campbell get sent into a strange, brightly-colored, folk-art-like future and pay homage to French underground cinema. The 12-minute short is ostensibly tied to real life, but while the film depicts the 1990 As Nasty As They Wanna Be obscenity trial and Luke’s 2011 attempt to be mayor of Miami, it’s also an out-there, handmade sci-fi flick.

The plot, real quick: A nuclear meltdown turns the population of Miami into wound-covered zombies, save for Luke, who inexplicably survived. As a result, he is captured by scientists from further in the future who fiddle about with his brain and intend to send him back into the past to spread his seed to as many people as possible so that more of Miami will possess his genetics and survive the meltdown. Thanks to a charming, low-budget take on the future and its moebius strip of a plot where it begins where it ends and ends where it begins, Life and Freaky Times of Uncle Luke is also a surprisingly mindful tribute to the 1962 time-travelling short La Jetée by French filmmaker Chris Marker. No really, it is. RIYL: The creepy sincerity of Tim & Eric Awesome Show Great Job!; Terry Gilliam’s Chris Marker riff 12 Monkeys; Bob Dylan’s weirdo dystopia movie, Masked & Anonymous.

Uncle Luke of 2 Live Crew Eulogizes Janet Reno: “She Always Stood Up For Us When No Else Would”