10 Albums You Can Hear Now: Mikal Cronin, Savages, Fitz and the Tantrums, and More

Strap on a pair of headphones because SPIN has collected 10 albums that are ready for streaming! Dig in below:

1) Mikal Cronin, MCII. “Mikal Cronin’s second album… mixes shambling rock with a perfectionist ear with quality control, as its star (who plays most of the instruments himself) applies a beachy sparkle to 37 minutes of fresh, fun rock ‘n’ roll… the sneaky sophistication of its pop-rock sound is what really makes the record enduring: Inward-looking but notably less angst-ridden than its predecessor, MCII feels positively stuffed with briskly alluring, summer-ready, California-sunny earworms.” (via NPR)

2) She & Him, Volume 3. “Playful, soft, sunnily melancholy and springlike, its songs once again subsist on the strength of their own agreeability. Timelessness has long been key to She & Him’s charm, and indeed, Volume 3 seems to be floating through AM speakers at all times. But the album also demonstrates that there’s more to Deschanel than her doe-eyed New Girl persona would suggest: She & Him is led by a confident singer-songwriter who, on records and elsewhere, knows exactly what she’s doing.” (via NPR)

3) Savages, Silence Yourself. “Now the British female foursome can show how they’ve sharpened their post-punk assault… The 38-minute, 11-track LP [collects] new tracks (such as the taut, Bauhaus-indebted “She Will”…) and re-recordings of older tracks (“Husbands,” “I Am Here,” and “City’s Full”) originally spread across the band’s “Husbands”/”Flying to Berlin” debut single and live I Am Here EP.” — SPIN (via Savages’ website) 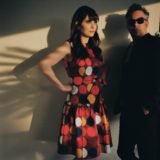 4) Purson, The Circle and the Blue Door. “Retro-minded psych-metal carnival Purson are… heavily indebted to the guitar-and-organ maelstroms of early prog; take melodic inspiration from the Beatles during their post-India freak-out phase; and of course toke tremendously on the fringe-jacket era of Deep Purple.” (via SPIN)

7) Coma, In Technicolor. “Strobing, chord-heavy tracks like ‘Cycle’ and ‘T.E.D.’ testify to the Cologne duo’s reputation as a live powerhouse, while ‘Missing Piece’ and ‘Les Dilettantes’ borrow from Hot Chip’s winking playbook. Along the way, there are nods to Alexander Robotnick and Suicide as well as labelmates like Superpitcher and Gui Boratto; ‘My Orbit’ and ‘The Great Escape’ sound like the Field remixing M83.” (via SPIN)

8) Saskatchewan, Occasion. “[An] exploration of what lies beyond dream-pop’s categorical limitations, eschewing simple tags like ‘shimmery’ or ‘evocative’ to explore true nuance and variation. The wobbly guitar and punctuating drums of ‘Youth Ministry’ add crunch to the ethereal soundscape. Frontman Chandler Strang’s sultry vocals help to make ‘Spellbound’ a gem of sheer primal energy amid a sea of ambient vibes… It’s dream-pop for a more discerning, pop-centric audience, one eternally indebted to the likes of Phil Collins, Tears for Fears, or even Michael McDonald.” (via Consequence of Sound)

9) BOY/FRIEND, Leather Weather. “BOY/FRIEND — New York’s Shan Poo — just released one of the best free R&B album of the year… Though at times derivative of contemporary pillars of the genre—and openly so, with the album tagged on Soundcloud with the names of The-Dream, The Weeknd and Frank Ocean, as well as HBO and Girls — that can’t lessen the fact that ‘About Love’ and ‘Time Spent’ and ‘Good 2 U’ hit hard as hell.” (via Fader)

10) Fitz and the Tantrums, More Than Just a Feeling. “The album was laid down in Studio B at Sound Factory in Los Angeles, CA, with Tony Hoffer (Beck, Phoenix, Belle & Sebastian). The producer helped the band to achieve a rich, synth-tinged sound, and lead single ‘Out of My League’ is a peppy new wave number featuring low-key synths that give way to a gigantic chorus.” (via Exclaim!)