The quasi-spring weather, the adrenaline of SXSW, the music: It’s downright astonishing that there wasn’t Actual Fucking during the Yeah Yeah Yeahs’ show at Stubb’s in Austin, Texas, this March, when the band teased a few choice cuts from their excellent new album Mosquito, while also pounding out a few old hits for good measure and turning everyone very, very on.

Think of it as a generational exchange: There was Nick Cave (with his Bad Seeds), the Gothfather of Soul, fleshing out the subdermal electric mutter on his good-weird-or-boring-weird new album Push the Sky Away in grand fashion, then reminding everyone that he’s goddamn Nick Cave when he tore into “From Her to Eternity,” a 30-year old song that’s still a master class in sweaty, engorged desire.

Yet the headliners were the Yeah Yeah Yeahs, a trio young enough to be Cave’s children, and nothing if not his spiritual heirs. Guitarist Nick Zinner was like a mini-Roland Howard playing Poison Ivy’s guitar, a combo plastered all over Mosquito; drummer Brian Chase did thunder and disco in the same run like a true post-post-punk (In terms of feel and timing, he might be the most underrated rock drummer of his fame-level); and then there was Karen O, the manic stepchild of Lydia Lunch and Elton John, as vibrant and charismatic a frontperson as Cave, singing “Zero,” an orgasm barely disguised as a getting-ready-to-go-out song. (Saturday night’s clearly all right for something.) Ol’ Nick may be lusting after the gal above his apartment’s ceiling on “From Her,” but if the lady from “Zero” is in that upstairs flat, she is getting off: “Try to hit the spot / Get to know it in the dark.” (Uh, yes, ma’am.)

This sort of new-boning-old is all over Mosquito, the product of arty no-longer-kids finding new ways to repurpose old influences, or playing with new ones and bending them in towards themselves, drawing on, say, LCD Soundsystem’s embrace-of-groove as much as the L train-borne New Wave of American Post-Punk they’ve come to exemplify. Their past can be as recent as ’90s alt-rock or as distant as ’70s dub reggae or Suicide’s gallery-core. Even their production team — TV on the Radio dude David Andrew Sitek and longtime cohort (and recent Nick Cave producer) Nick Launay — feels like an embrace of everything the YYYs are into, all in the service of expanding their skill set. 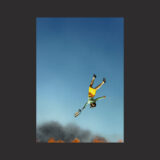 Given the trio’s penchant for substantial time off between albums — and tours that can feel like art projects by three distinct personalities rather than the career gyrations of an ongoing band-as-unit — it’s no surprise that this album, in spite of its dazzlingly ugly cover, is after something different from what they’ve already done, something groovier and more melancholy. They’ve stepped up their ballad game, and the grooves, smartly percussive and Kanye-slick, are deeper than ever. Which doesn’t mean the rockers are a complete afterthought (though some of us would kill for punk stunners as vibrant as those on their five-song Is Is EP, still their most perfect record). Opener “Sacrilege” is a stunner, the gospel choir offsetting O’s sex-mumble, while the track blends deep-focus PiL Flowers of Romance percussion with Chase’s bouncy trap-work and Zinner’s trebly riffs as you puzzle out whether it’s an ode to old scenesters (“They’ll suck your blood!” “They can see you / But you can’t see them!”) or O’s own bad self (“I’ll suck your blood!” “Mosquito drink! / Most anything! / Whatever’s left!”)

But it’s the ballads that lay their heads on your shoulder and sneak up on your heart. “Despair” pairs the chugging drum machine from Suicide’s “Frankie Teardrop” (one of the most New York sounds ever) with, well, despair (one of the most New York emotions ever). “Under the Earth” buries another lover with dubby effects and tangled rhythms, while “Subway” almost nods out to the train’s urban pulse: “It was metal on the mental,” O sings, sounding exhausted as Zinner’s spare notes fill in the space. “It was somethin’ in my heart / Caught my reflection in the subway car / Thought, ‘Look at you, whoever you are.'” We’ve all been there.

Elsewhere, “Slave” whooshes and rushes — Zinner zooming, Chase rolling — while “Area 52” is a goofy song redeemed by the album’s trippiest guitar squiggles. “Buried Alive” is a groove armada, stacking up windmill guitar over Chase’s swinging subway rhythm, O’s voice wandering amid the beat. It’s the sell-out-era Siouxsie and the Banshees dance anthem they’ve always had in them, and that’s before you get to the fact that Dr. Octagon raps on this tune, though the world may never be entirely sure why. (Speaking of the ’90s, the synth melody on “Wedding Songs” recalls nothing so much as Bruce Springsteen’s “Secret Garden,” a song I am not convinced the Boss himself even remembers. You apparently cannot take the Jersey outta the girl.) “Asked if I would try / To leave this all behind,” O sings of a lover on “Sacrilege.” They may get sick of each other, they may need their space, but I doubt they’ll stay away for long. There’s too much Then to turn into Now.