'PUT THAT SHIT AWAY' Karen, Nick, and Brian request 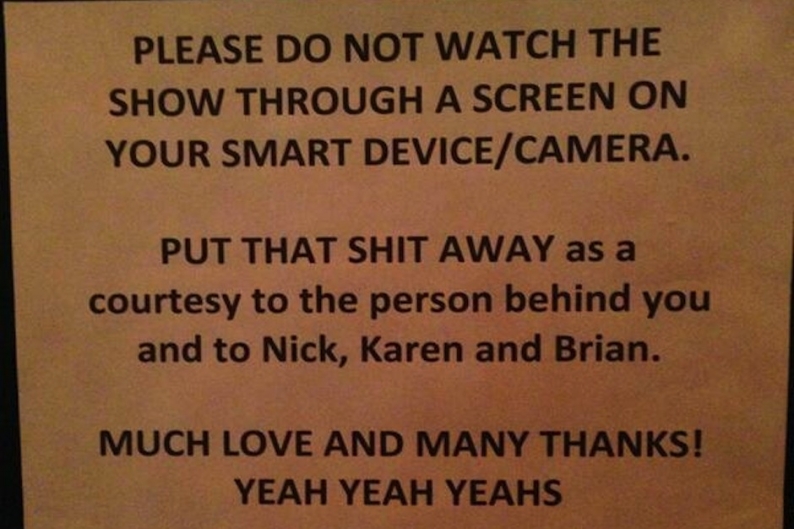 Yeah Yeah Yeahs have spoken, and they’d like you to experience their live show in real time rather than through the microscopic screen of your iPhone. Last night SPIN spotted the above sign posted on the door of Webster Hall, where SPIN’s latest cover stars were playing a homecoming concert before heading off to Coachella supporting their April 16 album Mosquito. Its full text:

“PLEASE DO NOT WATCH THE SHOW THROUGH A SCREEN ON YOUR SMART DEVICE/CAMERA.

PUT THAT SHIT AWAY as a courtesy to the person behind you and to Nick, Karen and Brian.

MUCH LOVE AND MANY THANKS!

Karen O reiterated the band’s request at the top of the second song (an incredible rendition of Show Your Bones’ “Gold Lion”), telling the crowd to snap away as much as they liked for the next few minutes, but then “put those motherfuckers away,” miming as though she was holstering a phone on the side of her banana-yellow “Violent Fuzz” suit. SPIN spotted a few violators on the floor of the venue throughout the 16-song set — which featured the live debuts of two Mosquito tracks, “Slave” and “Wedding Song” — but for the most part, the crowd respected the band’s wishes.

Reaction to a tweet we sent about the sign was massive and overwhelmingly in support of the band’s request. “Ha, amazing!” Ra Ra Riot replied. Many readers responded saying they wishes venues would enforce this rule on a regular basis.

Hear a whole lot more from the band in our massive new profile and check out Karen O’s evolution as a style icon here.