Last year, Titus Andronicus put out an album called Local Business. Musically, it’s a raw, punk-scuffed record ready for a band that lost guitar/violin dynamo Amy Klein to take on the road. Lyrically, it’s as ambitious as you’d expect from the gang behind Civil War-themed 2010 breakout The Monitor, only now turning their cannons, Das Racist style, on themselves and the scene that had celebrated ’em.

Cover art-wise, though, Local Business was, um, lacking. A red square with the title phrase slapped on the bottom, in a font that — we guess — mimics the neon signs in local businesses’ storefront windows? All right. But where were the soldiers? The basement-rock setup with the pre-Tea Party “DON’T TREAD ON ME” flag? Well, let the New Jersey band tell you, already!

The original “#BANNED” Local Business art, as Titus Andronicus tweeted yesterday, is what you see below. “We saw this painting at these guys’ house in MPLS we stayed at back in ’10 but it had been bought at a garage sale so the artist was unknown,” the band wrote. “So @XLRECORDINGS feared the artist would come out of obscurity for revenge, a la the lady on the cover of @vampireweekend ‘s ‘Contra’ album.”

It’s a shame. The original art, with its vaguely impressionistic depiction of a mushroom cloud, definitely would’ve been eye-catching: 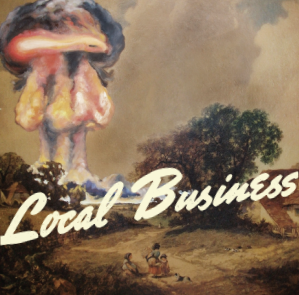 Titus Andronicus also linked to a ZIP fle of their The Innocencents Abroad vinyl-only live album, which documents a February 23, 2009 show in London and includes a raw-throated cover of the Modern Lovers’ “Roadrunner.” Download it here, going faster bits per second. (They also do “Wipeout,” though, so be careful.)