Epic 'Sorrow' performance is titled 'A Lot of Sorrow' 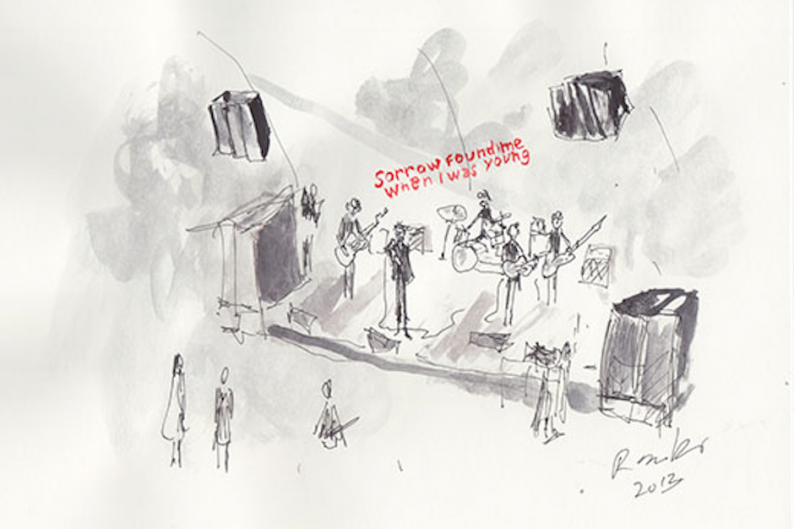 “I don’t wanna get over you,” the National’s Matt Berninger booms on “Sorrow,” from 2010’s High Violet. On May 5, he’ll be able to extend that not-yet-over-you feeling for a full six hours, as part of a special, “Sorrow”-on-repeat performance at New York’s MoMA PS1. Titled “A Lot of Sorrow,” and presented in partnership with Icelandic artist Ragnar Kjartansson, the event runs from noon to 6 p.m. at the Long Island City space’s VW Dome.

The National, whose new album Trouble Will Find Me is out May 21 via 4AD, aren’t asking you to stand and watch them for the entire six hours. Pitchfork quotes the band as saying in a newsletter that “you’ll have a chance to watch us perform for a few minutes at a time, but the audio will be audible in the courtyard, so you can hear what happens as we play ‘Sorrow’ again and again and again.”

MoMa’s event description likens the performance to sculpture, saying, “By stretching a single pop song into a day-long tour de force the artist continues his explorations into the potential of repetitive performance to produce sculptural presence within sound.” It’s almost like Goethe!

The regal Brooklyn rockers stop by Late Night With Jimmy Fallon on Thursday night, where presumably they won’t be playing for six hours.

It’s worth noting, too, that there’s some precedent for such an event: Monomaniacs Deerhunter stretched out a new song for nearly half an hour at MoMA PS1 earlier this year, and frontman Bradford Cox notoriously covered the Knack’s “My Sharona” for an hour in a 2012 solo gig.

To prepare yourself for “A Lot of Sorrow,” cue up the video below and keep replaying it for the next six hours.