Home » Features » Cover Story » We Do It Properly: Coast to Coast With Phoenix » Page 3

Though the band briefly toyed with calling their new album Ludwig van Phoenix, they believe they couldn’t have created a companion to Wolfgang Amadeus Phoenix if they’d wanted to. “Because we begin by using tiny pieces of us improvising, it means our process is too random to repeat ourselves,” says d’Arcy. “It’s very careful, but it all starts with improvisation, which is always based on new emotions.” He shrugs. “I don’t know, maybe every band has to say they feel like they’re doing something new every time.”

“The lyrics are different,” interjects Mars, who “oversees” their writing. “They’re more hostile than before. Not because we didn’t like what happened with Wolfgang Amadeus Phoenix, but because we wanted to try new subject matter.”

Pointing to Bankrupt!‘s “Bourgeois” and “Trying to Be Cool,” Mars argues that the lyrics largely examine “the beauty of the fake.” Maybe so, but when Mars sings, for example, about the empty affect of “pink and white ranunculus” in “Trying to Be Cool,” the vibe is blessedly more pompatus-of-love cipher-jive than The Possibility of an Island alienation.

“I don’t know what they’re talking about half the time,” admits Glassnote Records founder Daniel Glass, whose label also released Wolfgang Amadeus Phoenix (and both Mumford & Sons albums). “In ‘1901,’ were they saying ‘falling’ or ‘fold it’? Now the songs are about ‘mint-julep testosterone,’ ‘Coca-Cola’s Rosetta Stone’—every day I get an email asking what Thomas means. But the thing is, it doesn’t matter. They put it all together so perfectly, with such flair and style, and that extends to every aspect of their lives. They have a certain science to how they go about things. They don’t just go for a burger, they go to the place behind a curtain in Le Parker Meridien hotel in midtown Manhattan because it has the best burger.”

Do Phoenix have any concerns about becoming a pop-music version of a bougie burger joint, a refined, artisanal rendition of a greasy pleasure? “It’s dangerous to think about what people want,” muses Mars. “The Strokes, for instance: In the beginning, people wanted them to sound more new. Then they wanted them to sound like they did in the beginning. The whole time they were being adventurous, but people kept saying, ‘Do something else.’ You can’t control where you exist in people’s minds.” 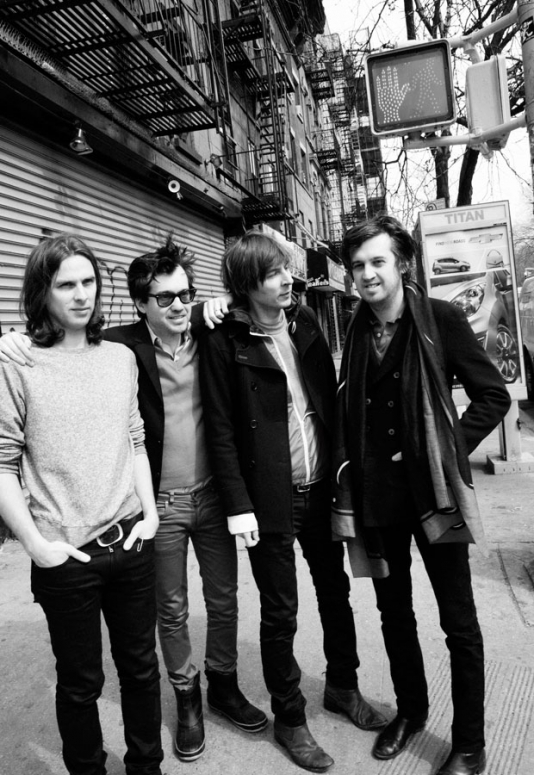 I’m pinged by Mars’ warning while strolling in San Francisco after brunch with Branco and Mazzalai, feeling like a lightweight namby-pamby because I didn’t eat anything and too quickly filled my belly with Red Stripe, which Mazzalai, the second-nicest member of Phoenix, insisted he pay for. (Telling factoids about the brothers: When they were children, they recorded the soundtrack to The Graduate off a French TV broadcast and listened to it obsessively; later, in a fit of rebellious self-identification, Branco scrawled “Simon and Garfunkel” on his desk at school.)

I wander over to Haight-Ashbury. At the iconic intersection, tourists take photos of the street signs and a shirtless old black man sells incense beside a vibrantly tanned young white man in army fatigues playing Neil Young’s “I Am a Child” on a shiny acoustic guitar.

I stop into a used record store with a picture of the Fab Four in full Sgt. Pepper regalia above the door. The place smells like cardboard and dust.

“Do you have new-ish albums?” I ask the man behind the counter. He has long greasy hair and a big belly.

“That depends,” he says, almost looking up from his iPad.

“Do you have anything by Phoenix?”

I sense the clerk do a spiritual eye-roll. “You’re looking for a different kind of store.”

5. HIERARCHY OF FORM: “A circle is the most perfect figure.”

A giant bouncer is giving tiny Sofia Coppola a hard time about getting into the Phoenix concert.

“This line is for wristband holders only,” barks the ungainly hulk, apparently not well-versed in contemporary American cinematic explorations of moneyed ennui. He surveys Coppola’s large retinue, a serene assemblage of fine cheekbones and sharp sunglasses. “Do you have wristbands? You all need wristbands!”

It’s a Friday evening in Williamsburg, Brooklyn, three days after the Davis gig. Phoenix is performing a special show for SIRIUS XM. The next night, they’ll be on Saturday Night Live. Then it’s Tempe, Tucson, Pomona, Coachella (where R. Kelly will join them onstage), Lollapalooza, the world.

Coppola, dressed in gray cargo pants and overcoat, doesn’t play any I’m-married-to-the-singer-and-also-famous cards, which, in this rare instance, would be warranted, but gauche. After a brief wait, Phoenix’s leonine road manager, Chag (pronounced “Shag”), comes out to smooth her entry. The bouncer reluctantly gives way, but the party hits a crude roadblock inside the venue.

“Quit blocking the hallway!” shouts another graceless, if impressively dedicated, security guard. “Either get in or get out!”

In a Sofia Coppola movie, that ultimatum would be followed by her walking out the door and down the middle of the street, the spiritually dubious entertainment industry hubbub slowly receding behind her as the monolithic major chords of Phoenix’s “Love Like a Sunset” swell on the soundtrack and the 6 p.m. sun gradually dies on the horizon. Instead, she maintains a sphinx-like smile while Chag again amiably defuses the situation.

Once the group is settled in the VIP balcony, Phoenix, as they have at each of the three performances I’ve seen them give this week, put on a sleek, celebratory show. Hedlund is an absolute beast on drums. Mazzalai vibrates with joyous energy, holding his guitar high on his chest and strumming furiously. Branco and d’Arcy bop in place as they emit highly effective, maximally efficient guitar and keyboard hooks. The winsome Mars plays Peter Pan in the middle, singing in his airy, vernal voice. The band starts with “Entertainment,” spends 70 minutes sounding like a most-excellent entrée of ’80s-era Tom Petty dipped in Brian Eno demi-glace, then ends with a reprise of “Entertainment.” At the last drum crescendo, Mars matter-of-factly slams the microphone down on the stage. The show’s over. The coffee shop is closed. 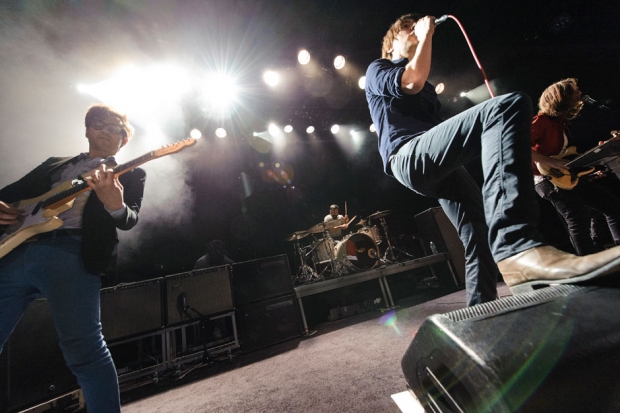 The band hustles backstage for a meet-and-greet with satellite-radio executives. In between handshakes, the daisy-fresh Mars tells me that he’s not apprehensive about again encountering SNL’s notoriously sloppy sound. (The band also performed on the show in 2009.) “We know how to do it properly,” he says before being engulfed in a hug from Daniel Glass. Then he adds, “We’re very meticulous, actually.”

Given the chance, d’Arcy smiles and disappears into a dressing room. Branco appears by the stairs leading to the exit. I tell him that I’d never seen a band begin and end a concert with the same song.

“We are always trying to make circles,” he says, tracing the shape in the air. “A circle is the most perfect figure.”

Ah, yes. The sacred bond between musician and instrument, made plain at a formative moment by one of the legendary progenitors of rock’n’roll. Or something like that.

“I thought this is what a musician must do,” says Mazzalai. “I thought he looked amazing.”