With headlining spots at Coachella and Lollapalooza and an earnestly crafted new album, Phoenix is poised to ascend to pop music's top echelon. But how exactly does the band do what it does so well, and for whom? DAVID MARCHESE followed the four unflappable Frenchmen in search of some clues. 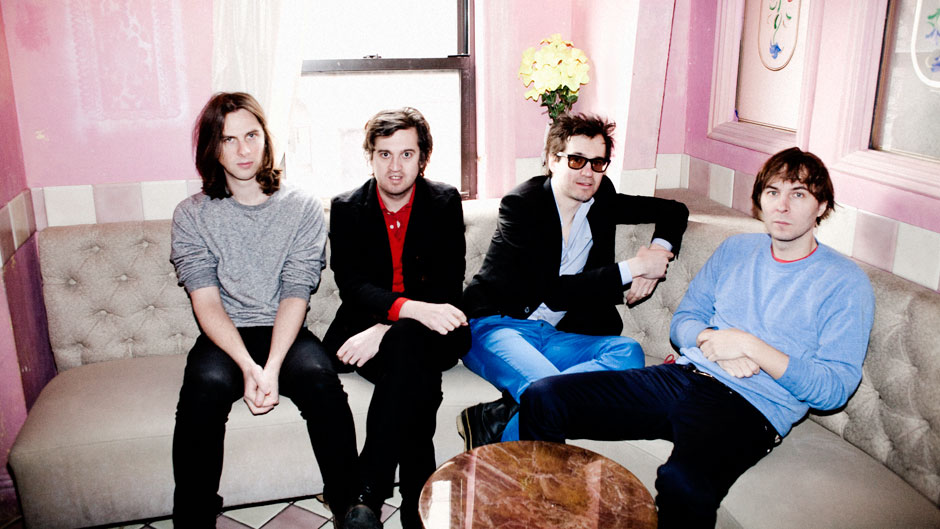 That kind of talk — effusive, abstract, pretty bang-on emotionally — is common among those who have spent a lot of time thinking about the band. Producer Zdar says the music captures the essence of “driving in your car in the summer when you’re a teenager and smoking your third cigarette.” Ironically oily French singer-songwriter Sebastien Tellier, another longtime friend of Phoenix, praises his countrymen for “not trying to explain the tragedy of their minds, but just giving pleasure in an intelligent way.” Which, if we’re being honest, is about as much as anyone can reasonably expect one human to provide for another’s entertainment.

But it’s the Rapture’s Luke Jenner, who hired Zdar to produce his band’s bouyant 2011 album In the Grace of Your Love after falling for Wolfgang, who best divines the wellspring of Phoenix’s magic.

“A band sounds great when they’re being totally themselves,” he says, “and that’s what Phoenix is doing: They’re smart, nice kids from Versailles with impeccable musical taste and the singer is married to Sofia Coppola. That’s who they are, and that’s what they sound like.”

Even when they’re killing time, Thomas Mars and his confreres exude a kind of productive cosmopolitanism. Wiling away an hour before soundcheck in a cordoned-off outdoors area behind UC Davis’ Freeborn Hall, touring drummer Thomas Hedlund sits on the ground and reads a book about the astronomer Johannes Kepler, while Branco talks with a show promoter about how best to combat a new status symbol: Scalpers. Tickets for the band’s San Francisco show, he shares, were going for as much as $2,000 online. “Perhaps instead of tickets,” Branco deadpans, “we can have people come to the box office and we will make a small scarification and insert a microchip underneath the skin.”

A few paces away, under freshly budding Oak trees, Mazzalai goes over the sheet music to “Lisztomania” with a compositionally-inclined fan, and Mars idly scrolls through his iPhone. Around them, thousands of students — a swarm of sweatpants and flip-flops — buzz about the lushly landscaped campus. Except one.

A helmeted and bespectacled girl with long black hair and an innocent air has hopped off her bicycle and is staring at Mars. She looks at me, then back at Mars, then me again, then Mars, then waves me over. “Is that—?” She can’t get it out.

I answer and she puts her hand to mouth, as if I’d told her that the glorious sight before her is, yes, an alien astride a unicorn.

“Do you think he’ll take a photo with me?”

Because he is the third-nicest member of Phoenix, which means he’s in a four-way tie with Branco, d’Arcy, and Mazzalai for first on the list of nicest musicians I’ve ever met, Mars immediately obliges.

“Are you coming to the show?” he softly asks the girl.

“I don’t have tickets,” she says shyly.

Mars types her name into his phone. “There’s plenty of room inside. The tickets will be for you at the door.” Mars also asks if she needs a plus one. He does this sheepishly, as if he’s worried she might say no and doesn’t want to cause any embarrassment.

“Okay, plus one,” she says, and hands me her Blackberry to take the photo.

Mars hugs her and smiles and the girl beams like the Alien on the Unicorn has just asked if she’ll return as his bride to Planet Zartaak.

At this moment, I will admit that there is a part of me that enjoys stories about Led Zeppelin and groupies and mudsharks and wants to get kicked out of Phoenix’s coffee shop and deposited in some shithole where the only food is salty peanuts that didn’t originally come that way and the only drink is beer. Just beer. And that small, socially passé part of me wishes Mars would now vampirishly eye the girl and say something sleazy like, “Do you know what in France we call la petit mort? Would you care to die a little?”

Instead, he smiles and simply says, “It’s free. Don’t worry about it.” He is the third-nicest member of Phoenix. It’s better this way. 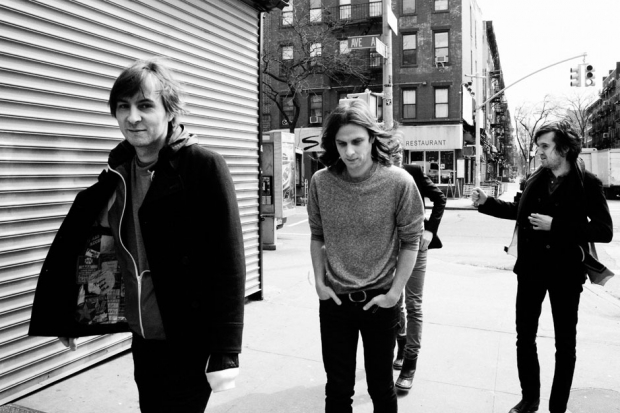 I ask Mars if the girl could be considered a representative Phoenix fan. “On Facebook, there is a thing that lets you see who ‘Likes’ you the most and sometimes it’s people aged 18-26 in Mexico, sometimes its 18-26 in London,” he replies. “So it’s hard to say exactly what else is the same, but I think there is something more than the music connecting them.” He ponders silently. “Phoenix fans would all make good roommates.”

That makes Phoenix’s opening act, mischievously tuneful Montreal indie-needler Mac DeMarco, a bit of a problem. He’s a born trouble-maker, a character-building pimple amongst the freshly-scrubbed Davis crowd, which he greets by saying, “This song is called ‘I’m a Man’ and it goes out to anyone with a cock between their legs.”

Walking through the cavernous hall’s creamy sea of co-eds, I see the fan who’d earlier been talking with Mazzalai. He’s chomping on an apple, handing out photocopies of the sheet music for “Lisztomania.”

“I want people to be able to sing along and to always remember the night Phoenix played Davis!” he blurts. Then he purses his lips and says, solemnly, “It’s also a conceptual art piece.”

From the stage, DeMarco says his next song is about cooking meth.

And the concept is? “Hashtag DavisRocks!” Could be worse.

I mosey towards the back of the alcohol-free space, towards the soundboard, and see Deck d’Arcy intently watching DeMarco and his bandmates, who are now sumo-slamming Bachman-Turner Overdrive’s oaf-rock classic, “Takin’ Care of Business.”

D’Arcy, the fourth-friendliest member of Phoenix, shakes my hand and smiles broadly. “DeMarco uses some very interesting chords,” he says.

I show him the sheet music that’s being circulated around the venue. D’arcy looks confused.

“It’s partly a conceptual art piece,” I tell him.

He scans the paper. “E minor with a G in the bass,” he says, pointing to a chord in the chorus. “That’s the only tricky one. It’s all correct.”

Watching DeMarco, I wonder if Phoenix, so controlled, so fluidly amenable, ever had the urge to do what DeMarco is doing. To blow raspberries. To be brats. “When we started at 13 years old, we would hold down one note on the keyboard and be screaming. That would be our song. Then we got into the idea of making real songs. No one in Versailles even knew who the Pixies were, so playing any songs that didn’t sound like boring pop was very strange for us to do,” says d’Arcy. “You know, there is a video of us playing music very early; we were screaming in our little-boy voices, making a big mess.” He swirls the memory of the video around in his mind and grins. “It will never be seen.”

DeMarco has released BTO from his sonic wedgie.

“Rock’n’roll,” he says from the stage in an exaggerated prepubescent falsetto, “it’s pretty cool, huh?” 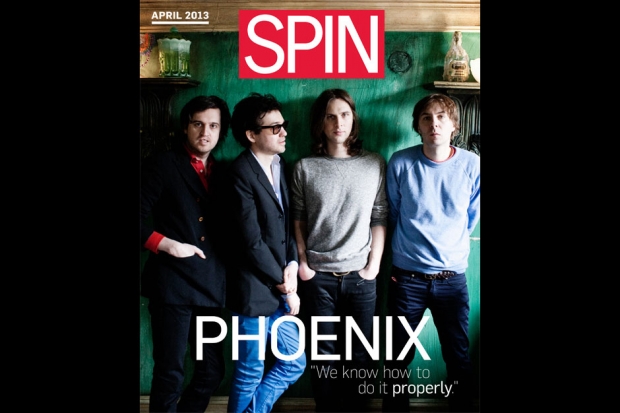 4. ELEMENTS OF DESIGN: “They have a certain science to how they go about things.”

The Phoenix machine is made from many tiny parts, and requires both precise planning and closely monitored horsing around. “We’re like monkeys hitting a keyboard,” says Mars, about the band’s approach to composition. “Eventually something good happens, but it takes a long time.” He’s lounging in a plush chair beside d’Arcy in a hotel conference room high above downtown Manhattan. It’s the week before tour starts, and he’s explaining how Phoenix do Phoenix. “We don’t write songs on guitar, play them for each other, and then record them. We record improvisations — I can never call them ‘jams’ — and then we see what fits together. It’s like interior design.”

After finishing two years of touring for Wolfgang, the band immediately began Feng Shui-ing its follow-up in 2011, first at Zdar’s spot in Paris’ Montmartre district, where they used the same recording console employed on Michael Jackson’s Thriller (success has its perks), then at Oscilloscope, the Manhattan studio formerly co-owned by the Beastie Boys’ Adam Yauch.

Taking the not-jams as starting points, the band begins diagramming musical structures in notebooks — grids and circles feature prominently — and setting formal challenges. (This is the experimentation that Branco was talking about.) On Bankrupt!, they wanted one key modulation per song, to blend guitars with synthesizers, hide minor chords inside major ones, and do it all so that the listener was unaware it happened.

Mars scratches his perma-tousled hair. “Our process is not very sexy. (A note about Mars’ hair: He cuts it himself and does not own a comb, though he was tempted to buy a solid gold 6,000-Euro item he saw in a store in Milan a while back.)