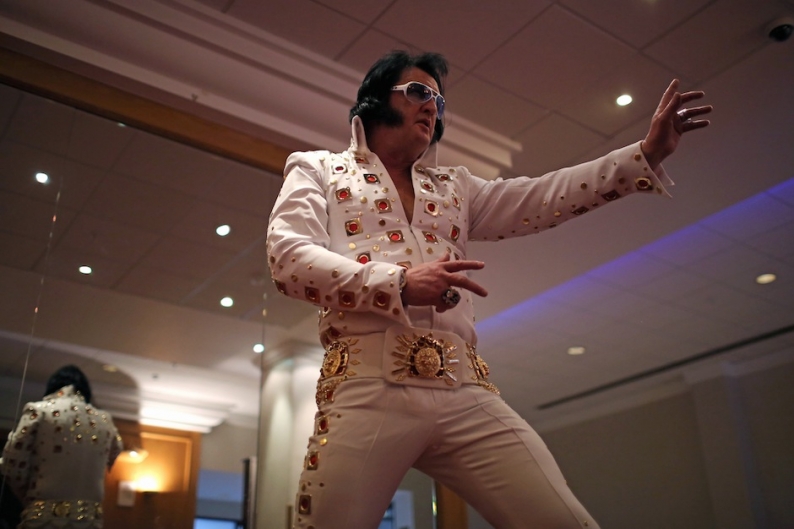 Wise men say only fools rush into opening packages with no return address. While a Boston bombing suspect’s supposed hip-hop fandom has become a talking point, the suspect accused of mailing poisoned letters to President Obama, a U.S. senator, and a Mississippi judge has posed as the King of Rock’n’Roll.

According to the Washington Post, Mississippi man Paul Kevin Curtis worked in western Tennessee as an impersonator. Curtis most often performed as Elvis, according to the Post, but he also portrayed Prince, Buddy Holly, and (demonstrating Oscar-worthy range) Kid Rock. Plus, like an indie-rock fan souring on a band once it has become too commercialized, Curtis once posted to the Internet that Elvis-impersonator competitions have lost their authenticity. And the AP reports that Curtis wore a Johnny Cash T-shirt in a federal court hearing yesterday, where he was charged with threatening Obama and others.

So the next time you hear someone bring up the Boston bombing suspect’s love of rap as somehow relevant to the crime he’s accused of committing, feel free to point out that rock’n’roll produces suspects in terrifying crimes, as well. (FBI documents say Curtis sent letters containing what’s believed to be the highly lethal poison ricin.) But better yet, maybe don’t jump to conclusions about guilt, innocence, or music’s possible criminal connections at all. After all, Curtis’ lawyer has said he “maintains 100 percent that he did not do this,” and another lawyer who knows Curtis has said that the suspect suffers, tragically, from mental illness. There’s always more room at Heartbreak Hotel.