Mykki Blanco’s breakout 2012 mixtape was titled Cosmic Angel: Illuminati Prince/ss. Give or take a few rips in the space-time continuum, why couldn’t that dual honorific be applied to Hollywood legend Lauren Bacall? According to MTV, Bacall’s roles in classic film noir were an inspiration for director Danny Sangra (the Heavy, Lianne La Havas) when conceiving the video for “Feeling Special.” The track comes from Blanco’s upcoming debut EP, Betty Rubble: The Initiation (out May 21 on UNO), and the video serves as an introduction to Blanco’s persona, showing her in full Bacall-blonde diva guise and also in a more traditionally male-gendered aspect, both in the back of a car and writhing on a floor. It’s a relatively straightforward clip, but this New York rapper has so far been special for sure. 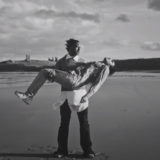