Let’s Get Slimed: How Ghost Town Social Media’d Their Way to Overnight Success

Out in godforsaken San Bernardino County, California, is a place called Calico. On land mostly notable for being east of Los Angeles, under skies that seem to cling onto every last whit of the metropolis’ pollution, this once-bustling beacon for silver mining has been all but abandoned. In 1881, four prospectors discovered some unlikely shine there and got filthy rich. Calico today, like so many seminal burgs before it, is a ghost town.

This is not why the four rock’n’roll hopefuls sitting in front of me at a nearby Encino recording studio called their band Ghost Town, but the similarities in origin (hard work + dumb luck) and stakes (boom/bust) are too strong to ignore. Right now, this young foursome pay rent in Hollywood, are poised to sign a label deal, and have fans around the world who send them handmade valentines, get tattoos of their lyrics, and proudly call themselves “ghosts.”

Yet until recently, nobody knew who these guys were. They didn’t even all know each other, and they certainly had no reason to be sitting in plush Triangle Studios, owned by the über-connected RedZone Entertainment, on this late March afternoon. Before all this, they would’ve only been permitted inside as runners, engineers, or session musicians — which basically describes their résumés heretofore. How long ago was that, exactly?

“Fifty weeks ago,” says Alix “Monster” Koochaki, 21, staring at his phone. The Ghost Town guitarist is using Instagram to accurately pinpoint the band’s beginnings. Singer Kevin “Ghost” McCullough, 23, explains: “Me and Alix grew up in Palm Springs together but got out of touch. I noticed his pictures were in L.A., so I was like, ‘How come we haven’t hung out?’ We got together a day or two later and started writing.” By “writing,” he means to say, “slipped and fell into a silver mine.” After noodling for a few months, the savvy twosome inducted programmer Evan Pearce and drummer Manny “Town” Dominick, both 25, and tapped the mother lode. Mashing up their various influences (pop, screamo, dubstep), Ghost Town emerged with a sound that seemed to further the mission of Linkin Park’s 2000 blockbuster Hybrid Theory, which incidentally was its decade’s best-selling debut at more than 10 million copies.

But this is 2013 and Ghost Town’s approach to the business of music more closely resembles Odd Future’s Tumbl into the industry. Their sound’s dark edge is matched by lyrics that trade in macabre metaphor (song titles: “You’re So Creepy,” “Zombie Girl,” “Skeleton”); each of their songs is accompanied by original artwork from fifth Ghost Alister “Imamachinist” Dippner, 24; and, of course, social media is a key ingredient to the entire process. 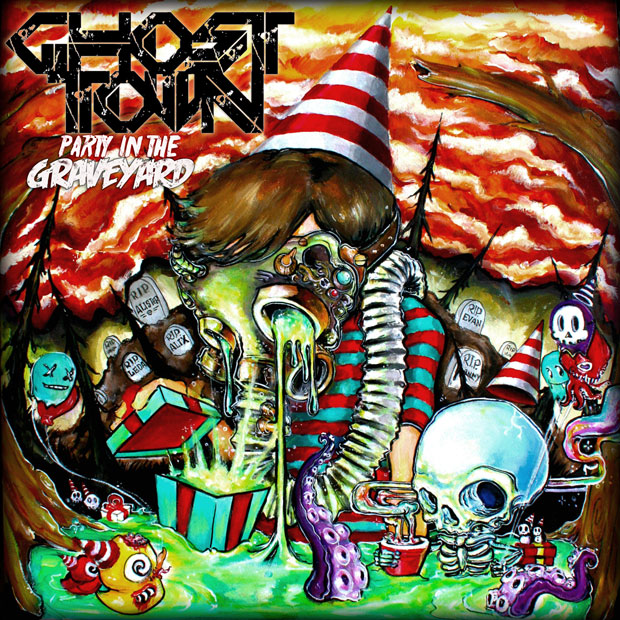 Dippner went to high school with Koochaki and McCullough in Palm Springs, played in the same hardcore scene and left, following his passion for painting to San Luis Obispo, three hours up the coast. “But I knew right away he was our guy,” says Kevin. “I sent him some roughs of the songs, and he was like, ‘Dude, this is like my art as music. I want nothing more than to be a part of whatever you guys make.'”

But in the fall of last year — September 4, to be exact — Ghost Town was truly established, and it literally happened overnight. Dippner filmed himself creating the artwork for “Game Freak,” utilizing his similarly amalgamated style (graffiti portraiture, fairytale illustration, Halloween-y imagery, steampunk themes). He sped up the footage to fit the length of the song, and they shared the clip on the modestly established YouTube channel ApocoreTV.

Between the punk video network’s 15,000 subscribers and Dippner’s own followers (roughly 13,000 fans on Instagram), the song made the rounds and wound up being reused that same night in a hair-cutting tutorial by emo makeup queen Amber Beale, who has almost a quarter of a million YouTube subscribers. She mainlined Ghost Town to her audience, and the band acted fast to secure their loyalty.

“Immediately, all of these kids in the comments section are like, ‘Where can I get this song?’ but we’ve only existed for, like, eight hours,” says Pearce. “We set up a MediaFire download and started getting thousands of hits, which became a problem, so we set up a PureVolume page, and within an hour, we were on the top of the site’s charts. We stayed in their top 10 for months.” And they’re still there as of press time.

McCullough continues: “That’s when we were like, ‘We can’t just keep getting lucky. This needs to happen every week.'” Like good prospectors, they dug in, reclaiming their video and launching “Ghost Town Tuesday” — the band released a new song and speed-painting weekly, promoted via DIY social-media assault. “People don’t realize we didn’t have 20 songs laying around. We wrote each one every week from scratch.”

“We pretty much made Ghost Town our life instantly,” says Koochaki. Realizing the power of their fans’ connection to Dippner’s images, they scrubbed their faces from the web, even as they began a campaign to respond to every self-christened ghost who wrote. “One day, it was just tweet after tweet of, ‘OMG, I love you guys,” says Dominick. “We’re like, ‘Wow! This girl’s in Denver…Chicago…New York. Let’s just talk to them.'”

The band had never played a show, but they found themselves spending hours each day interacting with fans while breaking from making the next week’s song. And it didn’t hurt that one of Dippner’s muses — the subject of his piece for their biggest hit, “You’re So Creepy” — also happened to be a teen tutorial video guru. Leda Muir’s clips featuring Ghost Town songs have racked up more than 1.3 million views to date.

“I remember thinking, ‘These are crazy numbers for a band that’s been together two months,'” says RedZone’s Merck Mercuriadis, former manager of Iron Maiden, Elton John, and Morrissey. He took on Ghost Town in December. “But great music is about integrity, about meaning something to someone and never letting that person down. They’re making records for the misfits. Kids who need music to get through life.” 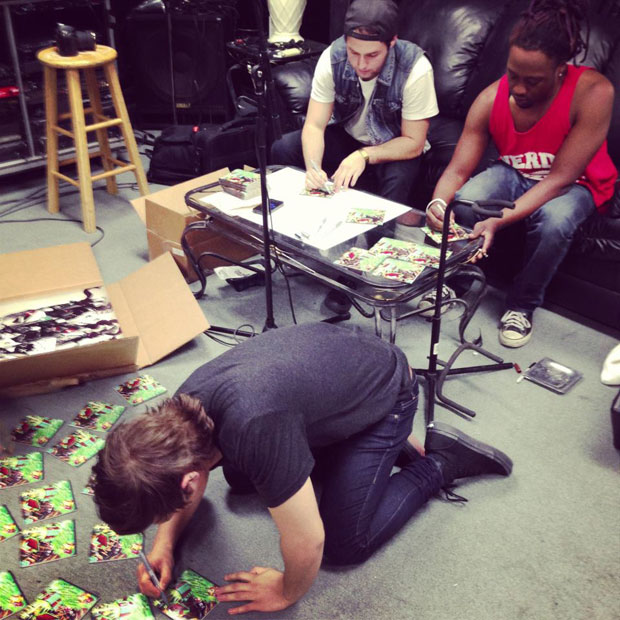 Kids who have demands too. At one point, the ghosts threatened to unlike Ghost Town’s Facebook page until the band members revealed their faces. They finally did via a PureVolume interview, opening the door to future Skype chats (“Our favorite,” says McCullough). And then there’s merch. Mercuriadis says the band has made $55,000 in non-music sales this year, shipping to England, South Africa, Israel, the Philippines, you name it.

At Ghost Town’s December coming-out show at the El Rey in Los Angeles, their third gig ever, Pearce saw a fan burst into tears when she caught site of the group loading in. They’ve kept up with Ghost Town Tuesday — minus two weeks in December to wrap up their January album Party in the Graveyard. Of late, they’ve lightened their load by doing acoustic versions (April’s Bare Bones EP) while fans share art and covers videos.

“It’s unbelievable how many people draw my paintings,” says Dippner by phone. The ghosts have requested a post-office box for their submissions. “They obsess over this music so much; they basically live in the world we’ve created.” They also buy his prints like hotcakes. “I’m making thousands of dollars per song. I bought new cameras for the speed-painting video and so much paint, my place looks like a Michaels store.”

He’s plotting a move to L.A. this summer, and a Ghost Town comic book is in the works that will incorporate the various characters who appear in McCullough’s lyrics. Koochaki explains: “We’ve been able to create an entire subculture: ‘Creepy girls,’ ‘zombie girls,’ ‘game freaks,’ ‘monsters,’ ‘dreamers.'” The ghosts identify with different song personas, and some get tats to match. The early adopters call themselves OGs — “original ghosts.”

But are they worried that Ghost Town’s population might tire of the theme? “That’s been a thought, multiple times: Are we gonna burn this shit out?” says Pearce. McCullough isn’t too concerned. “That stuff is so juicy, and it’s better than, ‘I dated this girl and she has tattoos.’ But that’s not all we talk about, and it’s not all we’re gonna talk about.” Dominick is downright cocky in his response. “We have our own ‘town.’ We have our own genre. It’s so limitless,” he says. “We’re setting the boundaries for others. If you had your own town, what would you put in it? Whatever you wanted.”

For now, Ghost Town are too busy to worry about how long those benevolent, enthusiastic young spirits will eagerly await the band’s next boundary-pushing transmission.