"I wasn't brought up under Juan Atkins or anything like that, you know what I'm saying?" 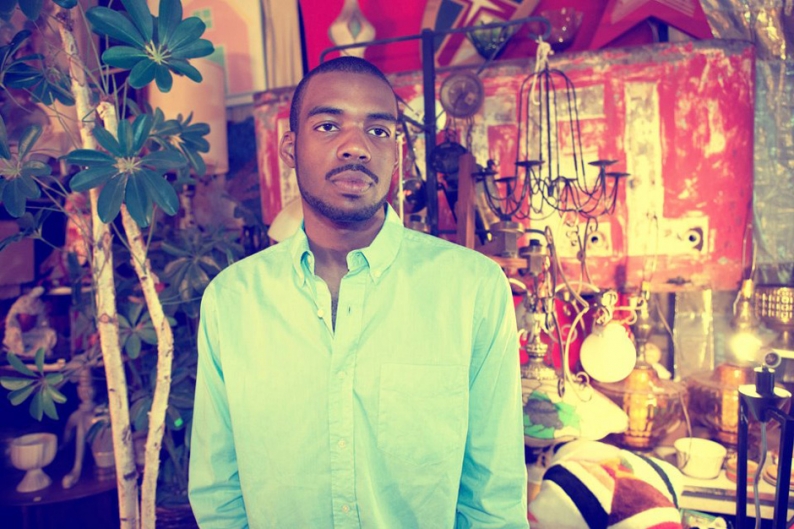 Who: Detroit techno fans have long spoken of the movement’s first, second, and third “waves” of artists who came along in the late 1980s and early 1990s, but Kyle Hall represents its second generation, literally. His father ran with the West Side’s “preps” scene of middle-class kids who dressed in GQ-inspired fashions and gave their parties names like “Charivari,” after a New York boutique dedicated to avant-garde European fashion. He learned to spin from Raybone Jones, a highly regarded Detroit DJ and friend of his mother, the singer Penny Wells. (Hall comes from a musical family: His uncle was the late jazz pianist Sir Roland Hanna, his aunt Naima Shambouger is a jazz singer, and another aunt plays “like, world, folk, fusion” violin.)

Birth of the Cool: “Listening to ghetto tech on the radio, that was my early introduction to techno,” he says. “I met friends going to school in Redford, in the suburbs, where it was more common for white kids to be listening to electronic music, so I heard some of the cheesy stuff and then I got curious. DJ Raybone took me under his wing, and I really started getting familiar with the music when I started collecting records, around 13 or 14. But I wasn’t brought up under Juan Atkins or anything like that, you know what I’m saying?”

Sowing Wild Oats: Hall released his first record when he was just 16. “I made it when I was 14,” he says. “I ended up going to this after-party for [Detroit’s] Movement [Electronic Music Festival] that year, and I met Omar-S there. He said he’d heard some of my music through [fellow Detroit DJs] Rick Wilhite and Marcellus Pittman. He was like, ‘I want to check out your stuff, possibly do a release.'” Those demos became Hall’s EP 01, which came out on Omar-S’s FXHE Records in 2007. That seal of approval from of one of the city’s most fervently independent labels helped open doors to Third Ear Recordings, Moods & Grooves, and, notably, Hyperdub, where Hall’s lo-fi brand of Detroit house stood out against the label’s London-centric bass sounds. But most of Hall’s work has appeared on his own Wild Oats imprint, which he launched at 17; again, with the encouragement of Omar-S. “The money I got from those little releases I did before, when I was trying to give out tracks to other people, I just put that towards my label, and my dad helped a little, too. I just pressed up my first record, sold a thousand of them. It was sweet. Man, Omar makes it so easy — he’s a good teacher.”

Kapow and Clutter: There are few stylistic constants in Hall’s music, which ranges from mid-tempo boogie to jazz-soaked house cuts to creaky percussive techno workouts. The sonic common denominators are gritty textures, needle-nosed frequencies, and slippery, evolving rhythms that easily disprove the old canard that drum machines have no soul. “I always liked that raw, analog quality,” Hall says. “That’s just what was presented to me as how you want it to sound. That always had a positive connotation to me, just from the records I listened to.” So did the idea of “the organic nature of the machines”; that is, that the real magic happens in real time, on hardware devices and magnetic tape. “I’ve always been into the manipulation and battering and trying and testing and kind of forcing a sound. I like the evolution of the sound when things are put on two generations of tape. The wow and flutter changes. Saturation increases at certain points, because there was something on that part of the tape. The medium I’m recording to is a part of the whole flow of the sound. Like the track ‘Zug Island,’ you can hear some kind of weird RF frequencies; a lot of those things come from me being in a third-floor apartment and getting that stuff from the radio station across the street. It’s so many dynamic things that change the sound, that make it more musical.”

Detroit Hustles Harder: “It’s a real experimental phase that I’ve gotten back into lately,” Hall says of torrid tracks like “Night,” a recent collaboration with London’s Funkineven under their Funkinevil alias. “At one point, I started taking in the club more, but I feel like the more I’ve taken in the club, the more I want to experiment with the dancefloor.” His new album, The Boat Party, plays fast and loose with dance-music conventions, taking in sandblasted drum tracks, sub-aquatic filter disco, and even deliriously minimalist ghetto tech: Just check “Finnapop,” a seven-minute, 148-BPM maelstrom of stuttering monosyllables and thundering 808 kicks whose lock-groove-inspired outro sounds like Oval remixing Alvin Lucier. The album’s title and cover art, which features the young producer propped against an out-of-commission speed boat framed by snow and housing projects, are intended as sly jabs at dance music’s association with jetsetting crowds in tropical climes. “We always hear about these new, European styles of dance music, and these boat parties that everyone talks about. The music I’m making comes from Detroit. Everyone aspires to hear dance music at these fancy boat parties, but it’s really coming from Detroit, a disenfranchised city.” But the irony isn’t lost on Hall that the music’s aspirational fantasies go back to its roots in the high-school party scene in the 1980s, a scene that lives on today. “Those people are still out, going to clubs,” he says. “They didn’t really change from high school. My dad still dresses up and goes out. That’s Detroit, man. Flossin’.”