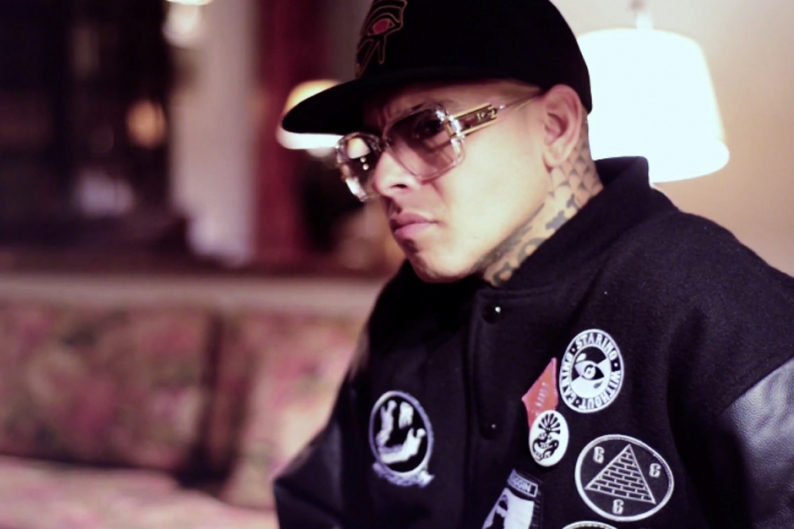 On his recent Lil Wayne collab “Beat the Shit,” Gunplay identifies himself as a “knuckle-throwing knucklehead,” the type to “bring that ruckus up in here, throwing bottles, throwing chairs.” It was only a matter of time, then, before he came across Arizona’s Isaiah Toothtaker, a terrifyingly tattooed dude who purportedly earned his surname by filling a mason jar with the gnashers he knocked out during bar brawls. We’re only glad they didn’t meet on opposite ends of a broken pool cue.

The former stands out within Rick Ross’ Maybach Music Group as exceptionally talented and just the right amount of strange. The latter lords over the left-field hardcore rap posse Machina Muerte and has notched recent collaborations with in-demand producer Harry Fraud and in-prison rhymer Max B. And they make a perfect pair on new song “Frownin.” The version you’ll hear below is remixed by Blue Sky Black Death (the original is on the way), the dark-minded Seattle beat collective who brought us Nacho Picasso in 2012. The track is as bleak as anything on Cannibal Ox’s The Cold Vein, but dipped in the purple swirl du jour that characterizes the work of guys like Clams Casino and Ryan Hemsworth. Gunplay moves through that magnificent murk head down with a workman-like flow, while Toothy delivers macabre punchlines with characteristic glee.

“Frownin” come with an Atoms for Peace-like GIF-as-cover created by Hector de la Vallée, the French artist behind Hemsworth’s “Charly Wingate” video. There’s a lot to frown about: