“We probably have more stage jumpers and crowd surfers than anyone in country music,” brags Eric Church good-naturedly over the phone from his Nashville home. The country star rang SPIN to discuss his career, which has seen the North Carolina-born 35-year-old go from scuffling songwriter-for-hire to boss man with his third studio album, 2011’s Chief, and its Country No. 1 single “Springsteen.” The aforementioned live touch has always been there though, and Church-goers are heard loud and proud on the recently released in-concert album Caught In The Act.

Currently readying a new studio album for the fall, Church took time out to tell us what he’s learned along the road.

Push the envelope.
I think it’s our job as artists to do something different and take the music somewhere it hasn’t been. Like my song “Smoke a Little Smoke” — I was told it would be my funeral if I released it, that there just wasn’t anyway you can put a song like that out. I knew the crowd was into it and if those people are wrong then we’re all wrong. I saw fit to force it and the song changed our career. It turned things around for us when the radio started playing it. The music got to win.

I’m not into changing what a song is to fit someone else.
I came to Nashville to be a songwriter, not to do what I’m doing now. My passion has always been writing songs and I would have been fine doing that for other people and letting them sing the hits. I wrote a batch of songs when I got here years ago and people always said they couldn’t sing them because they just sounded like they were about me. I couldn’t change the lines to make it more about them, so I started thinking more about the artist’s role and kind of found myself. 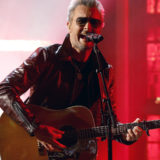 Turn the arena into a bar or club.
I want my crowd to be rowdy and some of that is on them but I always come out in attack mode. When I hit the stage I’m going to bring it and if the crowd’s not there I’ll go get them — physically if I have to. It doesn’t always happen where you walk off stage and say “That place got rowdy” but when it does happen and you got 14 or 15,000 people acting crazy? Man, that’s nuts.

Love the moments when the music moves you.
We’re very in your face because we were born in the bars so our crowds can be a bit rougher. I like that environment. I want to walk out on stage and not know what’s going to happen on a given night. People might fight, throw things, crowd surf, and it might not be safe but I love that energy. It’s palpable. That’s why I’m doing this, to get lost in the moment. I want the crowd to do the same.

You have to be careful with your voice.
We party on the road but it can’t be all the time. We’ll have some drinks before the show and drinks always make their way up on stage. Somehow in arenas those little airplane bottles always start floating around. I look at it like I’m partaking with the crowd. I want my crowd to leave their lives outside and I’m going to do that too. When I’m on the stage it’s a release moment; I’m going to have a good time. If I go out and sing “Jack Daniels” I’m going to be drinking it. A glass of milk’s not gonna cut it.

Make music that relates to people.
I don’t sit back and go, ‘Well because we’re selling records and tickets we’re successful.” The bar that I put on success is a creative one. Are we playing better than we’ve played? Are our records getting better? That’s my bar and no one will put a higher one on the music. The rest of the stuff — ticket and record sales — those are just external things that you can’t worry too much about.

You have to be real confident.
We were hard to pigeonhole early on in terms of what music we were playing. It was a little more rocking and edgy than most country at the time. We ended up playing in biker bars and stuff — I wouldn’t want to play a show where people are out there line dancing. If you go play at a club and there are big, bearded tattooed bikers at the bar you better bring it on stage; can’t just hop up there and play covers. That journey is the reason we have a broader appeal outside just country music; because we went out and played places people wouldn’t expect.

It has to go back to the art.
No one is going to write about people who are doing the same thing over and over. I think it’s very important to put your opinions in the music and create something that is different. You just have to be okay with it being destroyed once in a while. That’s part of it. When [2011 single] “Homeboy” came out and some people started to attack it that was pretty bizarre for me because I didn’t expect that kind of reaction. I was trying to take a stance on gangs and what drugs can do to families. That’s the picture we wanted to paint with that song and we didn’t cut any corners. That’s what you’re supposed to do as a songwriter. I’m real proud of that song.