Ableton outlaws grab the reins of 'Get Lucky' and vamoose! 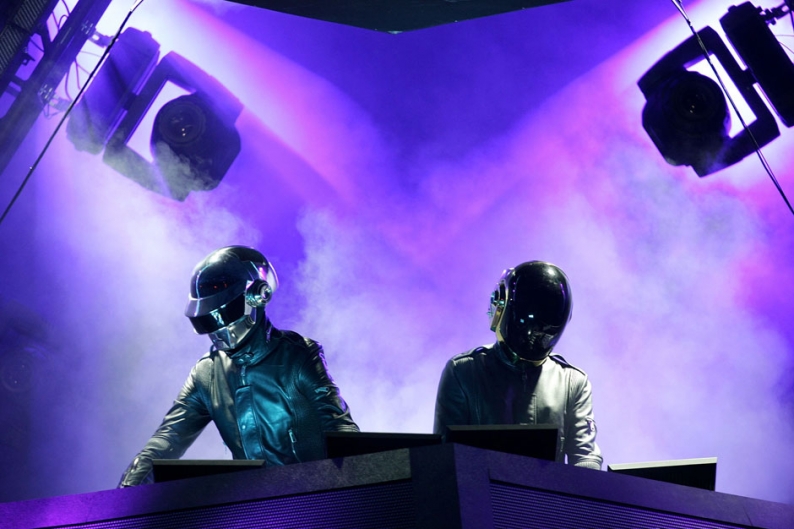 Man, people must really miss the “Harlem Shake” meme. In the seven or eight weeks since that phenomenon has gone from “Hot” to “Oh Heeeelllll No,” a nation of Final Cut Pro-Ams and bootstrapping bedroom producers have found themselves with way too much time on their hands and a precious lack of raw materials. Sure, last week’s Sorority Meltdown was fun, but how many ways can you spin that? (Answer: Just one.)

Thank goodness for Daft Punk, then. The agonizingly drawn-out pre-release campaign for Random Access Memories has practically begged for audience participation, and the audience happily obliged. Not long after the French duo snuck a 15-second loop of “Get Lucky” into Saturday Night Live’s commercial breaks, fans, opportunists, and culture hackers were loading the fragment into Ableton. The paucity of available content actually turned out to be a productive creative prompt. One enterprising 8-bar barista even served up the all-too-brief snippet in three more satisfying sizes: Tall (10 minutes), Grande (one hour), and Veeeeeeeenti (10 full hours!).

Since the Pharrell-fronted single became available for purchase, the floodgates have opened. A search on SoundCloud for “Daft Punk Get Lucky remix” currently returns more than 500 results. Most of them, unsurprisingly, aren’t worth your time, and no one has yet come up with anything with the viral staying power of “Daft Hands” or “Daft Bodies.” Still, between a spinning gorilla, a mumbling Moroder, and a hilariously inept “shredded” version, the “Get Lucky” crapshoot occasionally pays off.

Moroder on the Mic
For those who can’t really get down with Pharrell’s falsetto, maybe Giorgio Moroder will hit the spot. We’ll just take it on faith that the gravelly mumbling here really is the Italo-disco pioneer’s voice; presumably, the guttural hemming and hawing was sampled from Moroder’s interview in Daft Punk’s “The Collaborators” series. Either that, or producer Laka_r has a housefly trapped in his studio.

Pharrell as Fantasy Jacko
Or maybe you think that Pharrell doesn’t push his falsetto far enough. Presto: via Buzzfeed, the YouTube user Maim Ixed pitched up the song and added a few stray whoops and hoo-hoos to come up with a pretty passable approximation of Michael Jackson (even though it’s no Yeardley Smith). We can’t wait for the chopped-and-screwed version that turns “Beat It” into a fake N.E.R.D. production.

Suit and Tie and Helmet
Way back in mid-March, mashup mavens the Hood Internet slapped Justin Timberlake’s “Suit & Tie” a cappella over a re-edit of Daft Punk’s SNL TV spot to create “Suit & Commercial,” which rather uncannily presages the finished product with Pharrell. In retrospect, why the hell didn’t Daft Punk get JT for a featured spot? They’re in the same family of labels, after all.

Get Shredded
Say what you will about the failings of Internet culture; at least it’s given us “shredded” versions — that is, music videos given brand-new soundtracks that make it appear that the performers are fucking up big time. (Imagine a cross between Be Kind Rewind’s “Sweded” film remakes and Spinal Tap Mark II performing “Jazz Odyssey.”) TopitoTV’s shredded “Get Lucky” is up there with the best of them. Every detail is spot-on, from Pharrell’s inscrutable mewling to Nile Rodgers’ goofy-ass chuckle. When the camera zooms in on the robot playing drums, the video makers even make it sound like he’s mumbling inside his helmet. (Who knew that Thomas and Guy-Manuel were also the parents in Peanuts?)

Mexican Monkey Business
Before Daft Punk revealed the single’s title to be “Get Lucky,” there was considerable confusion as to what, exactly, the vocoded lyrics were. Synthtopia, among others, weighed in with “We’re up a Mexican monkey” as one possibility, and enterprising YouTubers wasted no time in finding a variety of images to fit the interpretation. This one’s our favorite, though: Spinning gorilla plus luminous disco flooring equals win, win, win, win, win.

The Video Readymade
With enough B-roll of freeways and a little footage recycled from one of Pharrell and Daft Punk’s own videos, you too could come up with a clip that kinda sorta looks like a genuine “Get Lucky” video. We’d have preferred something Sweded, but it’ll do.

Justify My Luck
Despite Nile Rodgers’ involvement, is “Get Lucky” not sounding stereotypically disco enough for you? SoundCloud user djerb comes to the rescue with a mashup that infuses Daft Punk’s pneumatic loop with scraps of the Bee Gees’ “You Should Be Dancing” and “Stayin’ Alive” — plus, because why not, the chorus of Justice’s “D.A.N.C.E.” (It’s all part of the cosmic unconsciousness, clearly.)

Vanderway or the Highway
The French producer Vanderway, of Toulouse’s L’ordre Collectif, uses the SNL loop of “Get Lucky” as a jumping-off point for his own jazzy interpretation complete with new keys, drums, guitar, and even vocals. Truly delivering on the song’s yacht-rock-disco potential, it sounds a little like a cross between Phoenix and the Sea and Cake.

Everybody Wants to Be Daft Punk
Daft Punk are totally owning pop culture right now, which makes this surprisingly successful mashup of “Get Lucky” with Tears for Fears’ “Everybody Wants to Rule the World” all the more canny.