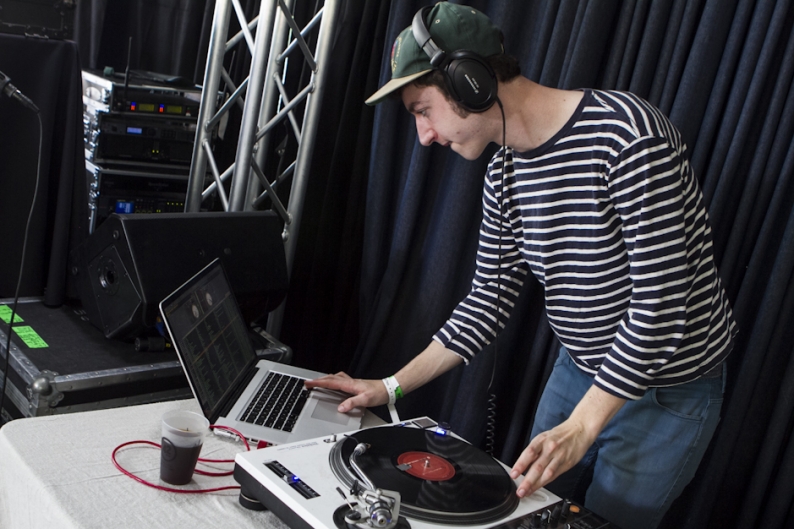 Prolific wunderkind DJ Jeremy Malvin has recorded under the names Professor Purple, I So Garden, Roommates, and DJ Norf Pole. But with his Chrome Sparks project, it appears the 22-year-old musician has finally found a sound in which to settle. The Sparks EP, released in March, serves as a mission statement: ambient pop with a cinematic, futuristic grandiosity.

The Brooklyn resident and avid crate-digger took some time to speak with us at the SPIN House at the Ace Hotel + Swim Club in Palm Springs during Coachella’s first weekend about some of his favorite things, from obscure disco records to Absinthe-fueled blackouts.

Stereolab’s Dots and Loops
“I don’t really have one favorite album that has lasted through the ages. Currently, it’s Stereolab’s [1997 album] Dots and Loops. I got into it maybe a year ago, which was very late, because it’s many years old at this point. It came out when I was way younger. I wouldn’t have gotten into it at that point in my life, but I was able to get into it later. The production, the beats, there’s some great vibraphone parts in there and I’m a sucker for vibraphone — [the album is] really interesting.”

The Koyaanisqatsi Film Score
“That’s by Phillip Glass. [Glass and director Godfrey Reggio] did a few [films]: Powaqqatsi and Naqoyqatsi, and a bunch of weird names that all meant different things in languages that I can’t remember. The music for that definitely affected me more than any other film soundtrack.”

Opening for fun.
“I played drums for Miniature Tigers on a tour they did opening for fun. The shows were a lot bigger than any shows I had ever played before. That whole tour, and I couldn’t even pick a specific gig, but that whole tour was my favorite. I absolutely get nervous playing a tour for thousands of people. I like being able to do both, to play for a bunch of people and then do smaller gigs, like hanging out by a pool playing some tracks that I like. Basically it’s a reminder of why I do this, and what I really want out of this, which is to play music for people and have fun. It’s about knowing that I’m in it to have fun, and not worrying about getting nervous because there are a lot of people looking at you!”

Wazoo Records
“In Ann Arbor, when I was living there going to school [at the University of Michigan], I lived on top of a record store called Wazoo Records, and I love that place. I would always go through their bargain bins where they had really cheap albums, but they also had the best new shit. I lived on the third floor, and the second floor was the record store and the first was a bar. I miss that bar so much. I moved in there before I was 21, and I was nervous that I would spend all my money on records, and when I turned 21 that I’d spend it all on alcohol. I had a little more self-control than I expected, thankfully, but I definitely spent too much money in both of those places. My favorite rare gem record is I’m An Indian, Too by Don Armando’s Second Avenue Rhumba Band. It’s one of my favorite disco tracks of all time. It was a show tune that was adapted to be a disco track, and it’s really funky and really groovy.”

“My Boo” by Ghost Town DJs
“[The track] always gets people on the floor. It’s impossible to not get down to that track. The safest emergency track ever would be anything by Michael Jackson. That’s like the panic button. You just put on ‘Thriller’ and then everyone’s like ‘Ohh…okay!'”

Momo Sushi Shack
“That’s a sushi place in New York that I’ve been in love with. I’m a sucker for sushi. They have incredible sushi, and I could go there every night. If I’m there on a date and the date’s going well, then we’ll go back to my place to listen to my rare gem records.”

Absinthe
“Before I moved to New York, I went to DJ a loft party in Bushwick. I had some friends come out and it was a nice night. Before I knew it, I woke up under the DJ table at this loft — I had completely passed out. I asked, ‘What the fuck happened last night? I do not remember getting really drunk.’ I had, like, one shot of absinthe, and that’s all I remembered. But then I saw pictures, and I was taking shots of absinthe with everybody. There’s one shot of me trying to teach someone to DJ, with my arm sloppily on someone’s shoulder. It was the dumbest shit. I was probably 18 when this happened. It was a weird night. I couldn’t even tell you.”

Cat Gets Hammered Listening to Chillwave