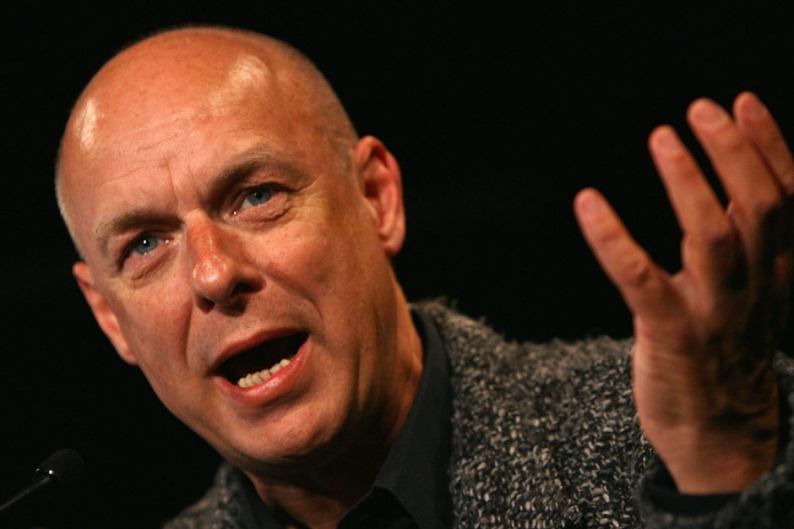 Brian Eno famously found the inspiration to craft his 1975 ambient masterpiece, Discreet Music, while bedridden, recovering from injuries sustained after getting hit by a taxi. Now, in a so-fitting-it’s-weird twist, English doctors are instructing patients to heal themselves with Brian Eno’s restorative music.

As the Guardian notes, orthopedic surgeon Robin Turner has teamed with the hugely influential producer/sound wizard to create a “quiet room” where people can “think, take stock, or simply relax.” The £34 million private Montefiore hospital — located in Hove, England — reportedly also features an Eno light and music piece in its reception area. Turner says he came up with the idea in 2010 after seeing how peaceful his normally “fidgety” mother-in-law became after visiting the Talking Head affiliate’s audio-visual 77 Million Paintings installation. “She went in and was there for two hours, which is unheard of,” Turner said. “It was proof that this has a calming influence on people.”

The doctor apparently then approached Eno about working on something therapeutic together, and the 64-year-old Lux author agreed.

“It seemed a natural step for me to take as I’ve been dealing with this idea of functional music for quite a few years,” Eno, a firm believer in the idea that music can alter moods, told the Guardian. “I’ve met many women who have had children listening to one of my records so I knew there was this dimension and here, in the last couple of days I’ve met patients and staff who have said, ‘I really like that room, it makes a big difference.'” He added, “I’m so thrilled with having done this and I think it is helpful to people, I really think it’s useful.”

Turner said that they will look into physiological changes that happen to people who stretch out in the Eno room, such as shifts pulse, blood pressure, and anxiety levels; for now, specialists are going off anecdotal evidence. “The scientist in me says that’s not very scientific,” Turner admitted, referencing a case where a cancer patient requested a copy of Eno’s music to take home. “But the human in me says that makes it all worthwhile.”

Americans will get the opportunity to test the mental health effects of Eno’s 77 Million Paintings when the installation comes to New York as part of the traveling Red Bull Music Academy event series. The ambient innovator himself is scheduled to give something called an “illustrated talk” about the piece on May 6 at Cooper Union in Manhattan.