20 Albums You Can Hear Now: the Flaming Lips, Fall Out Boy, Ghostface Killah, the Thermals 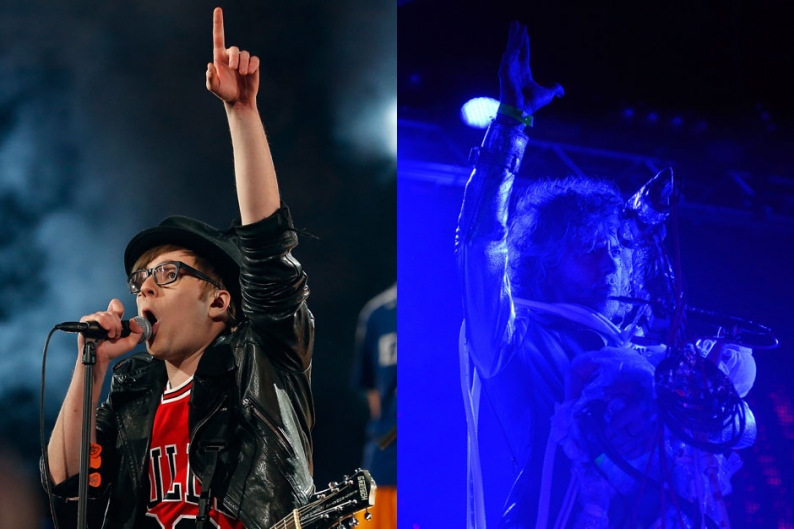 Normally, our weekly round-up of ready-to-stream albums tops out at 10, but there’s so much stuff flying free on the Internet right now — full-lengths from the Flaming Lips, Fall Out Boy, Ghostface Killah, Shuggie Otis, and the Thermals included — that we decided to double-up and share 20 this time around. Grab a pair of headphones and dig in:

1) The Flaming Lips, The Terror. “Sounding almost post-apocalyptic in its scabrous, searching bleakness… The Terror moans and scrapes ominously from its opening seconds onward. Scorched and frayed, with an almost industrial ugliness to it, ‘Look…The Sun Is Rising’ gets the proceedings underway by capturing the sound of a world (and, it would seem, a band) in distress, even decay.” (via NPR)

2) Fall Out Boy, Save Rock and Roll. “Elton John, Courtney Love, Big Sean, and Foxes all showed up as well for their respective tracks… We’ve got ‘em all lined up… from the rip-roaring opener ‘Phoenix’ (featuring this ferociously barked chorus: ‘I’m going to change you like a remix / Then I’ll raise you like a phoenix’) to ‘Rat a Tat’ featuring Love’s shout-poetry to ‘Save Rock and Roll,’ which just happens to be powered by the piano plinkings of the Rocket Man himself.” (via SPIN)

3) Ghostface Killah, 12 Reasons to Die. “Twelve Reasons to Die has all the makings of a cult classic. Jangly, tumbleweed guitar that warms the cold-hearted comic book-style violence. Snyth stabs that evoke Bernard Herrmann’s violin screeches in Psycho. William Hart’s age-spotted tone reminding us of our own mortality and the planes where soul music and hip-hop meet. The drums are loud and high in the mix, driving when our hero readies for a fight, as on ‘Blood on the Cobblestones,’ uncomfortably tight just as he’s betrayed during ‘An Unexpected Call (The Set Up)’ and charged like a car chase while he tastes revenge on ‘Sure Snot (Parts One & Two).'” (via NPR)

4) Charli XCX, True Romance. On “What I Like,” the album’s latest single: “‘What I Like’ combines XCX’s successes and her overreaches and shows there was no reason to worry. [Producer] J£ZUS MILLION’s sighing vocal samples and trap-inflected finger-snaps here make for a strobe-lit concoction fit for the club, the car radio, or, as XCX sings here, ‘Sittin’ on your bedroom floor smokin’.’ XCX mostly relies on a conversationally lilting vocal style here, reminiscent of fellow Brits like LIly Allen or the Streets, but there’s also a soaring, effects-gargling bridge worthy of Future.” — SPIN (via Pitchfork)

5) The Thermals, Desperate Ground. Thermals frontman Hutch Harris, talking to SPIN: “I think we’re doing what people like best about this band on this record… It’s us getting back to what we’re best at and what people love about us, which is really direct, really fast, really loud, and kinda crazy.” — SPIN (via Pitchfork)

7) Ghost B.C., Infestissumam. “The band’s new single, ‘Monstrance Clocks,’ is a dark, satanic-themed metal track. It pairs a haunting organ with eerie lyrics and ends with a choir singing “Come together, together as one/ Come together for Lucifer’s son.” The metal riff, unrelenting drums and periodic bouts of electronica create a sound somewhere between Mastodon and Metallica, with a healthy dose of Swedish synth mixed in.” — Rolling Stone (via Pitchfork)

8) Iron and Wine, Ghost On Ghost. “For all its rich, Technicolor brightness… Ghost On Ghost retains the capacity to burrow knowingly into bleak Wisconsin winters (‘Winter Prayers’) with an acute understanding of loneliness and alienation… A dozen years into a career with few missteps, Beam still lets his songs and sound morph and evolve; more than ever, he’s a songwriter versatile enough to pack huge ideas into simple arrangements and vice versa.” (via NPR)

10) Cannibal Ox, “Gotham” single. “‘Gotham (Ox City)’ is a heady crawl through an aural urban hellscape hosted by two world-weary poets who appear to be in top form. Old school fans should geek over the ‘Iron Galaxy’ lyrical throwback on ‘Gases in Hell (Inhale),’ but nostalgia isn’t the focus — while it doesn’t sound like a day has passed since [2001’s The Cold Vein], Vast and Vordul were always spitting from the future. ‘Psalm 82,’ to wit, plays like an inter-dimensional Wu-banger.” (via SPIN)

11) The Shouting Matches, Grownass Man. “Grownass Man [is] the new album from the Shouting Matches, [Justin] Vernon’s… side project that co-stars Brian Moen (of Peter Wolf Crier) and Phil Cook (of Megafaun and DeYarmond Edison)… Don’t expect any ‘Beth/Rest’ or songs named after Canadian cities; Grownass Man alternates between the alt-country sound of Uncle Tupelo and the boozy blues-rock of the Allman Brothers. Bon Iver diehards might follow Vernon down this unusual path, but don’t expect Kanye to be sampling any Grownass tracks any time soon.” — SPIN (via NPR)

12) Various Artists (including Broken Social Scene, Feist, Stars, Ra Ra Riot, and more), Arts & Crafts 2003-2013. “A definitive retrospective double album, in conjunction with [the label’s] ongoing 10th anniversary celebrations… a deluxe package curated from a decade of releases, including some of the label’s most recognizable songs, as well as never before heard rarities.” — Arts & Crafts (via Spinner)

13) Odonis Odonis, Better EP. “Better steers the Toronto trio’s already potent anxiety to even more terrifying places by zeroing in and amplifying the darkness that could be heard in its predecessor’s intermittently surfy melodies. It’s a feat on display in tracks like ‘Flight,’ which welds Tzenos’s blown-out yelps to horror movie organs and bristling low-end.” (via SPIN)

14) Sad Baby Wolf, Electric Sounds. “Marty Crandall and Neal Langford, both former members of the Shins, have returned to Albuquerque for new band Sad Baby Wolf. That homecoming feels crucial to debut album Electric Sounds, which radiates the emotion-wracked, atmosphering-scraping crunch they might’ve heard in those pre-Shins days from bands like the Promise Ring and Camden, as ‘emo’ was becoming a dirty word and groups associated with it were stretching out their arrangements.” (via SPIN)

15) Life Coach, Alphawaves. “Under the Life Coach moniker, [drummer Jon] Theodore has supplanted… drum machines with live percussion, loosening up the often mechanized feel of [2011’s Life Coach]… But aside from the name, [Life Coach founder Phil] Manley’s new material really bears little similarity to Life Coach, favoring openness and dilation instead, even on heavier tracks like ‘Mind’s Eye’ and ‘Into the Unknown.’ It took a live drummer to make it happen, but Manley’s finally finding into his own special post-rock sweet spot.” (via SPIN)

16) Tera Melos, X’ed Out. “X’ed Out picks up largely where the band’s 2010 LP Patagonian Rats left off, drenching Reinhart’s demure vocals in labyrinthine guitar work. But X’ed Out goes even further than its predecessor, keeping the rapid-fire instrumentation but peeling back some of the instrumental layers to put the focus more firmly on the vocals. The buoyant riffing of tracks like ‘Sunburn’ and ‘Surf Nazis’ moves the band into the territory of fellow experimentalists-gone-pop-maximalists Marnie Stern and Maps & Atlases.” (via SPIN)

18) White Fence, Cyclops Reap. On “Pink Gorilla,” the album’s lead single: “A song which opens with [an] explosion of vintage psych that, we can only imagine, is somewhat akin to its titular beast bursting into one’s living room during a real swinging party.” — SPIN (via Pitchfork)

20) SZA, S EP. “SZA pleaded for someone to show her a hiding place on ‘ICE.MOON,’ the sparkling lead single off the electro-R&B starlet’s [S EP]… On “Aftermath”… the up-and-comer has given up on companionship. ‘I doubt I’ll ever be anybody’s baby,’ SZA sings breathily over bleary synths and handclap samples.” — SPIN (via SoundCloud)