In rap, the convention is to overstate your strengths: “Welcome, ladies and gentlemen,” Jay-Z preened in 2001, “to the eighth wonder of the world.” In indie rock, the convention is to overstate your weaknesses. “And in the darkened underpass, I thought, ‘Oh god, my chance has come at last,'” Morrissey moaned in 1986. “But then a strange fear gripped me and I just couldn’t ask.”

Strange fears are always gripping people in indie-rock songs, the most iconic of which — whether by the Smiths, Liz Phair, Belle & Sebastian, or Radiohead — portray their singers as supersensitive people who are willing to publicly confess feelings that most of us would rather not acknowledge, even in private. In their weakness, we see our own, only rendered with more coherence and less actual weeping. This, in turn, makes us feel a little better. Call it a cult of vulnerability.

Into this tradition steps Alabama-born Katie Crutchfield, shrugging, rumpled, a little hungover. Her second album as Waxahatchee, Cerulean Salt, is a catalog of people who like the idea of getting up early but not as much as they like sleeping in, who have a drink today primarily because they had one yesterday, and who in general find it much easier to embrace their problems than actually seek out solutions.

The music she makes is deliberately simple: guitar, voice, drums, sometimes bass; short songs and no discernible overdubs. It’s a sound rooted in a history that includes early Rilo Kiley, the Mountain Goats, Barsuk Records, and Saddle Creek: small-town, big-hearted indie-rock realism. Through unpolished sounds come intimate, unpolished scenes. In “Hollow Bedroom,” she tells someone she’s slept with that she worries their housemates can hear her breathing through the walls; a few songs later, she finds herself wading through a house full of people slurring their words. “In your ear, I will whisper weakly things that I do not mean” she says, almost cheerfully. 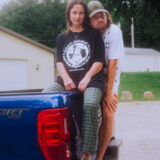 She tells us her dreams; she tells us the dreams of people she shares her bed with. When her protagonists finally get around to leaving town on “Coast to Coast,” she describes them in a car, scanning the radio in the middle of the night, silent, stuck with each other, and more importantly, stuck with themselves.

Like last year’s all-acoustic American Weekend, Cerulean Salt is preoccupied with how it feels to be young and unhappy. Crutchfield is remarkably even-handed on the subject. Nobody blows up here, nobody melts down, and in general, nobody seems to experience any kind of dramatic pain that can’t be ameliorated by getting drunk with someone and staggering arm-in-arm through a public park. It’s honest because it acknowledges something that people in love with their own misery hate acknowledging: They have fun now and then too.

So if it feels good, why stop? Occasionally, the people on Cerulean Salt dream about suicide; occasionally, they glimpse a future of bitterness, regret, and solitude. In small towns, inertia has a way of setting in. “Just graduated” turns into “sticking around for awhile.” At 21, you trip, scrape your knee, and realize you’re 25. You get up, check out the wound, and turn 30. When Crutchfield shows us someone’s dad getting drunk on “Dixie Cups and Jars,” it’s not as a point of pathos, but a warning: Just because you get older doesn’t mean you grow up.

The nakedness of Crutchfield’s music is the source of both its confidence and its vulnerability. There isn’t a song here that sounds like it’s being played by more than three people, and most of them sound like they could be played by two. Such is the multitasking, bootstrap mentality of the Amerindie underground, where if you’re not good enough at your instrument to play your part really, really well, you can just make the part a little simpler. The recordings are dry and vérité, which they have to be to help Crutchfield make her point: Namely, that these are honest songs about real people being hammered out in the basements and garages of unromantic places. But they’re also incredibly catchy and simple, whether upbeat or downcast — a quality that ties them not only to 1990s and early-2000s indie pop, but ’50s musicians like Buddy Holly, whose sense of economy was punk decades before there was a word for it.

“I had a dream last night / We had hit separate bottoms,” she sings with her sister Allison on “Lively” — an image of symmetrical unhappiness she echoes later on the album’s best song, “Swan Dive”: “I’ll grow out of all the empty bottles in my closet / And you’ll quit having dreams about a swan dive to the hard asphalt.” Under her, a tom-tom thumps away like an excited heartbeat: This is the future they hope for, but secretly know they’ll never have.

There’s a lot of that here: Of two people, together in physical space but irreconcilable in spirit, spouting off their worries to each other in an almost hypnotic state, neither person seeming to ever really hear the other one out. These aren’t songs about connections made, but connections narrowly missed. These are songs about people who think that commiserating with someone is the same thing as loving them.

Crutchfield protests, briefly: “In this dejection, there’s a connection,” she sings on the spare, album-closing “You’re Damaged.” If there is, it’s a tenuous, fleeting one. What really makes Cerulean Salt sad is that nobody Crutchfield writes about seems to pull their head out from between their knees long enough to realize that they could actually make each other happy, and not in a momentary, we’ll-be-sober-soon sort of way, but a true and lasting one. Instead, they persist in hunkering down and hoping their lives will pass by as painlessly as possible, which for the most part, they do. And if the pain hits, at least they’re well versed in how to lie to each other. “Won’t you just let me pretend this is the love I need?” Crutchfield asks on “Swan Dive” — a brutally honest line about someone who can stand anything but the truth.

I keep returning to the song’s opening words: “I cling to indifference.” They stick out in part because they don’t make sense: Clinging isn’t an indifferent act. But song after song, it’s what Crutchfield does. She pays keen attention to oblivious people, vividly renders vague feelings, and in general seems to care a lot about the paralysis of being too afraid to care at all. She definitely clings to all this — indifferently, she suggests, but the clarity and insistence of Cerulean Salt says otherwise.