There’s an argument to be made that, as far as American audiences go, Suede were the best-kept secret of the ’90s Britpop explosion. That’s partly their own doing — the band, led by dueling androgynes Brett Anderson (on vocals) and Bernard Butler (on guitar), made decadent glam grandiosities that had little to do with the then-prevailing grunge aesthetic — and partly due to bad luck. A lawsuit brought forth by another musician meant that the band had to be billed as the London Suede in the States.

Across the ocean though, Anderson and Co. (Butler left the band in 1994) ran the gamut of rock experiences, from hugely hyped upstarts to drug-addicted stars to, now, clear-eyed and clear-headed reunited vets. Bloodsports (Ingrooves/Fontana), out March 19, is Suede’s first new album in 11 years, and it’s full of the dramatic guitars and romantically anguished melodies that helped kickstart the British rock renaissance.

Anderson, 45, spoke with us on the phone from London to share his notions about how to navigate a career in constant flux.

There’s a cliche that artists have to be damaged to make interesting music.
I refute that. There’s so much tension and conflict and friction within everyday life — you just have to look for the interesting pockets of life. I don’t have the same out of control lifestyle that I used to have but I’m able to find these pockets of interest within everyday life. Bloodsports is a really interesting, well-observed album because of that. It’s not a safe, middle-aged album. It’s about co-dependency, infatuation, jealousy, and all these things. Those tensions are in everyone’s life; they’re omnipresent. It’s a matter of finding and identifying them and writing about them. You can do that without drugs. 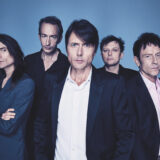 People become frozen when they become famous.
What happens is you get successful and, all of a sudden, life is arranged for you. Your manager and others lead you on a rope and you don’t really engage with life as you should. That happens to anyone in a successful band. When we broke up in 2003, I needed to personally break away from the machinery. I made solo records, and that was hugely important to me, but it was probably just as important to gain back a sense of independence about myself. I needed to do it. I felt as if I’d lost my hunger. I had a huge learning experience over the last decade just by learning to be a human again and living my own life.

You don’t want your performance to be too balanced.
You want it to feel like it could fall apart at any moment. And often it feels that way because the performers are not fully-rounded human beings. It’s absolutely true: You do need to get pampered and have this machinery around you in order that you can be out of control on stage. You can’t be busy thinking about doing the washing and shopping, have all these mundane things and then have this rock’n’roll creative spirit. They’re two different capacities. You need someone else taking care of that side of your life. That kind of attitude, it’s charming when you’re young, but if you’re still like that when you’re 40, it gets a bit sad and dark.

You never have to feel motivated to play a good song.
That’s because a good song has its own built-in motivation. I never have a sense of nostalgia when we play the old Suede songs live; I never have a sense they were written 20 years ago. It always feels very current to me, and that’s because a good song is magical. It’s the same sort of thing as when you have a chord book of a band and you play it yourself, sitting with an acoustic guitar. You don’t start playing a Kinks song and wonder what your motivation is. You get inspired by the magic of the song — the way the chords and melody work. It’s the same with playing any great older stuff. And that magic is something I certainly feel with the new material.

You can’t take your eye off the ball.
I did at exactly the wrong moment and we had to be called the London Suede in America. I’ve always hated that name. [The forced name change] really did sour the whole thing. It was all going quite well: the debut album sold quite well and the media were with us, and then as soon as we had the name change, it all absolutely soured. It soured our whole outlook on touring in the States. I don’t know how we let that one go, but we did, and we woke up the next day and couldn’t take ourselves seriously over there.

As you get older, it gets harder to know what’s good.
It’s all about the feel, it’s all about instinct, and as you get older it gets harder to do tap into those things — it’s as simple as that. Look, there are very, very few artists that are doing good work 20 years after they started. It’s a matter of being honest about whether the music is good enough. A lot of people aren’t. Getting back together, there’s a slight illusion that happens when you jump onstage and play your old songs and they sound great. It’s easy to convince yourself that the magic is still there. There’s a big difference between doing that and writing new songs. It’s hard not to be complacent. The songwriting for Bloodsports was a very hard process. We had to approach it like we were a new band, with the same hunger. But the album feels raw and exciting to me. I think we got it.