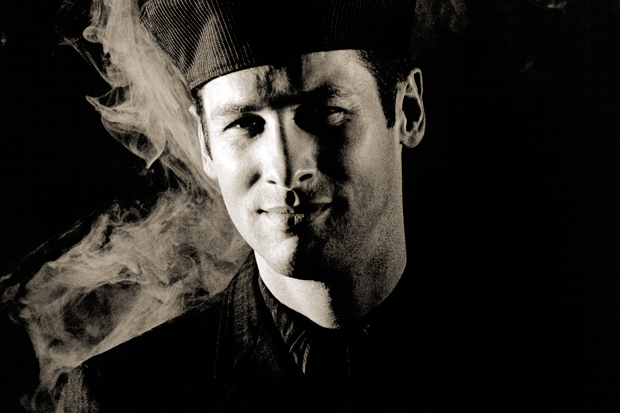 The outrageous trailer for director Harmony Korine’s Spring Breakers plays out as a Girls Gone Wild episode turned street war, where drugs and territory are marked by city blocks and thugs with guns. Or, in this case, babes with guns. The story’s four leading ladies — played by Selena Gomez, Vanessa Hudgens, Rachel Korine, and Ashley Benson — wear neon bikinis throughout, toting Uzis and sucking face while goaded on by a drug dealing creep of a rapper named Alien, played by James Franco. Just for good measure, Gucci Mane makes a cameo.

In a brilliant move, Korine brought on Skrillex and Cliff Martinez to score the film. Pairing the dubstep idol with the latter, the in-demand composer responsible for the music behind Drive (and who’d played drums with the Red Hot Chili Peppers and Captain Beefheart) led to a handful of collaborations between the two. We talked to Martinez about scoring this beach blanket bloodbath.

How many times have you seen Spring Breakers?
I’ve never seen the final film, actually! There’s a premiere next week so I’ll see the completed, mixed film for the first time in full then. But at home I’ve seen parts of the film every day for seven weeks. I feel like I know the film inside out but, from front to back, I haven’t seen it yet. I’m sure it looks stunning. Hopefully it will sound stunning as well.

How did you get involved with this project? What drew you to the film?
I think the genesis of it is that the picture editor Doug Crise likes my music and he cut Arbitrage, and cut a lot of my music to Lincoln Lawyer. I think Doug was a fan and I have a feeling that Doug passed along Spring Breakers with my music as a placeholder. But my first real brush with it was actually meeting Harmony. When my agent told me about it I was wary but thought it might be an interesting picture. I read the script and honestly it didn’t seem that interesting. [Laughs.] And then I met with Harmony and he really was interesting. He said, “Forget about the script. The script is just a starting point. You have to see the film.” When I saw the film I was really knocked out. I said, “Sign me up.”

When you’re watching a film without music to it, do you compulsively think of ideas that could possibly work or do you take it back with you and meditate on it.
Well it is usually letting the film marinate for a while. The process is watching the film, laying on the couch staring at the ceiling, or talking to the director to it. But I get a lot of help with it. They didn’t hand me a movie with no music to it. They actually handed me the film, which was pretty close to the final cut, with a lot of temporary music in it, most of which was mine. [Laughs.] So I didn’t have to do any serious heavy lifting. I think creatively Doug and Harmony did the creative heavy lifting in the music dept in terms of establishing the broad, global plan of style and attitude. They were like, “We want you to sound like Cliff Martinez.” I said, “Great. No problem.”

When did Skrillex come into the picture as someone to contribute to the soundtrack?
I think he came in before me. When I first saw the film, several of his songs were in the picture. Harmony suggested that the two of us write together and collaborate on some dramatic underscores. At that point Skrillex was busier than Mick Jagger. He was on the road most of the time. We had some face time on two occasions, where we talked about how we would share files. We had sketches that we would exchange and we collaborated a lot that way. I also took some of the ideas from the opening of the film, which is “Scary Monsters and Nice Sprites” set to a scene of a Girls-Gone-Wild-type of spring break debauchery. That was the essence of the film, musically that was the blueprint. I took a lot of the ideas and chord changes from that and willed that into some other areas of the film. Skrillex did some separate songs and dramatic cues and so did I and then we did some together. That’s how it became a combo platter.

Did you do any kind of research into the world that the film stems from? Either culturally or musically?
The first thing I started asking around about was the whole concept of spring break. I had never had a spring break experience so I started kind of grilling people about that, particularly Harmony. I wanted to know how realistic the film was. Most of the people I talked to had had their spring break experience many years ago and it sounds like it was very different than what the film portrays. The film kind of pumped up the whole wild side of things. The criminal aspect of it is hyper-reality. Musically, I had some familiarity with the newer concepts of electronic dance music, but I don’t really write in that style.

Actually I had not heard Skrillex before, so that was a discovery. I did some Google stalking of his videos and his music. I was not really called upon to do that. I think I had to meet it halfway somewhat just so there would be stylistic continuity, so it didn’t feel schizophrenic. I didn’t want it to feel like it was shifting gears all the time. What I was called to do wasn’t to do anything hard or beat-driven, I wasn’t given to sound like those kind of artists but more to compliment them.

I remember reading that one of the things that excited you about working on Drive was that you were able to work with Kraftwerk-style synths and delve into electronic music. Skrillex is representative of a pretty different, newer class of electronic dance producers. Was there a difference in the way you approached composing with Spring Breakers?
Well, I always enjoy getting into character and studying whatever styles I may be working with. Whatever it is, I kind of liked being faced with something unfamiliar. These days someone calls you because they want you to make something that sounds familiar to you. They want me to sound like myself. On the other hand, I wanted to sound like EDM has rubbed off on me a little. I kind of liked it. I liked that it was rhythmic and very electronic. A lot of the directors I’ve worked with in the past wanted things to sound more organic. They overtly didn’t want something that was plastic or electronic. So that was kind of a breath of fresh air for me. For Drive and for Spring Breakers, they both wanted an electronic, techno sounding score. I tried to dive into that in my own way.

Was there any equipment or production techniques that you used that you haven’t had the chance to explore before?
Gosh, I hate to say that I recycled a bunch of old ideas. I have a pretty big trick bag. I don’t think there was anything new in terms of gear or equipment that was new. But I think the approach, the idea, of the function of the music is what I thought was the most original or distinct thing about. My impression of the sound and my impression of Harmony as a person, a filmmaker, as a storyteller, is that he likes to kind of be controversial.

Well, yeah, for sure.
And he does that with you in real life too! He really does! He tells you outrageous stories where the point is just to startle you. In turn I just absolutely refused to be shocked by anything in the film. [Laughs.] Which I think was his intention. The film is much more commercial than he originally thought it would be.

The cast has a lot to do with that.
Yeah, I think he was very proud with the casting. I didn’t know the background of Ashley Benson or Vanessa Hudgens. I didn’t realize he had casted people who risked blowing up career bridges by doing this film. Musically I thought there were a couple of key themes. There’s the scene where the girls are in court and you have a close-up of Franco looking like a letch, looking at the girls. There’s a scene with topless girls teasing the guys. I thought, okay, the idea here on the surface, if you saw the film without music, is very threatening. There are very dark ideas. You’re thinking, “She’s about to get raped. Who knows what these perverts are going to do with these girls!” It just felt very, very dark. Very threatening. Which is the kind of music I do most of the time! I thought that maybe I shouldn’t play it that way. Maybe I should play it like these are just kids; they’re very innocent and that this is this fairy tale or fable that they’re living in. And so I thought I should play it like a lullaby. That was a turning point for me. I think that if you saw the movie without any music at all it would be a very dark story. So I guess my job was to provide a contrasting point of view to the one that is sitting there, idling, and instead try to make it playful and fun.

How do you feel about the state of film music composition and where it’s heading next?
I think that it’s one of the most reckless career decisions that you could ever make, the same as being a magician or a basket weaver or something. I’m pretty lucky to be working at it and to be working with very talented people as well. As an art, I’m not sure where it’s heading. The technology is really leading the charge. The 21st century craft based in music seems to be sound for its own sake. There used to be orchestras or acoustic instruments, now it’s any sound you can imagine that you can create through electronics. I think where it’s headed is that in the next five to ten years, you’ll see someone win an Oscar for best score with something they composed on an iPhone.

Does that frustrate you at all?
When I first moved to Hollywood in the mid-’70s, you couldn’t throw a stick without hitting a drummer or guitar player. Now it’s kind of the same thing but with composers. The guy who came to install my air conditioner the other day saw my equipment and asked me if he could come over and work with me!