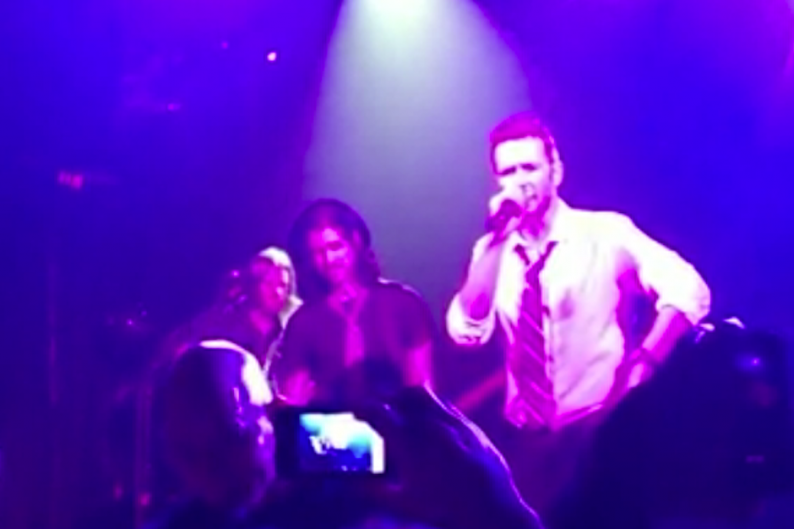 Don’t mess with Scott Weiland. In a solo show at New York City’s Irving Plaza on Saturday night, the allegedly fired Stone Temple Pilots singer fired some devastating verbal bombs at a heckler, as Grunge Report notes. Weiland might’ve been on his suit-and-tie shit, but that was not going to stop the singer, currently on his Purple at the Core tour, from threatening to beat the offending audience member black and blue.

In fact, Weiland went so far as to challenge the heckler to fight him mano-a-mano. “So you’re fuckin’ pulling that fuckin’ like gun shit off on me?” Weiland began. We’re not sure what that meant, but bear with us, because he continued: “Then come up and meet me one on one, man. You play tough guy from an audience behind a barricade…” You really have to watch the video to capture the full amount of swagger in his voice here.

Weiland then talked to the security guard, saying he’d “love to” fight the audience member. “I just don’t get it,” Weiland said. “Guys like you, fuckin’ waste your money. Actually, let him stay here, and just get all fuckin’ riled up. He won’t be able to sleep tonight.”

Watch the video here, or below.

Don’t miss our recent original reporting on Weiland:
Scott Weiland Wants You To Root for Him
Scott Weiland: ‘It Hurts My Feelings’ When STP Don’t Get Along