The alt-folk singer issues a statement after criticism 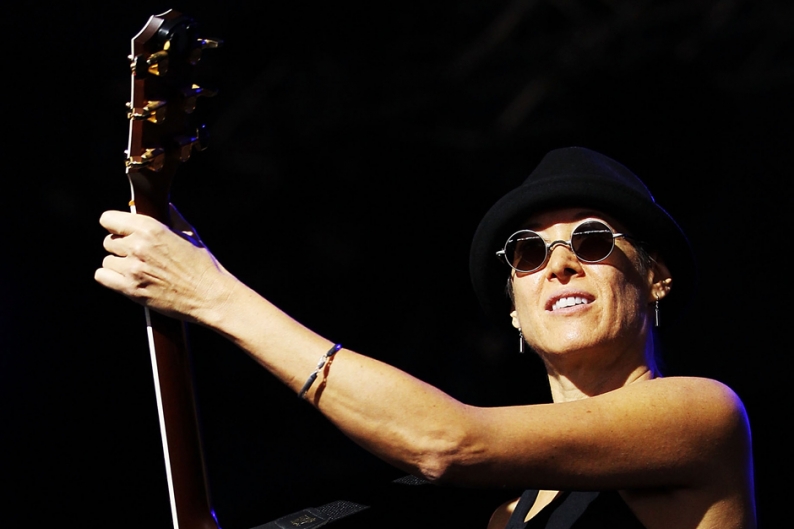 Michelle Shocked has issued a pair of statements regarding her controversial rant at a Sunday night San Francisco concert. It was widely reported, by USA Today and others, that in addition to saying that “God hates fags,” the alt-folk singer professed that, “When they stop Prop 8 and force priests at gunpoint to marry gays, it will be the downfall of civilization, and Jesus will come back.” Proposition 8 is the disputed California measure that has made gay marriage unconstitutional in the state.

But Shocked, whose own sexuality has presented a complex profile over the years, says she was only describing the beliefs of other born-again Christians who she considers “intolerant” and “scared.” She says that she does not hold these views, that her support for the LBGT community “has never wavered,” and that she hopes people will extend mercy to those members of the church, and any of her fans, who do espouse homophobic views.

As a result of initial reports of an anti-gay tirade from Shocked, the artist has seen virtually all of her previously scheduled tour stops canceled by venues, many of which shared scolding words about the event. Shocked’s response makes no mention of her tour — in support of the 25th anniversary of well-regarded second album Short Sharp Shocked — and finds her apologizing for the supposedly misunderstood speech: “I am damn sorry.”

I do not, nor have I ever, said or believed that God hates homosexuals (or anyone else). I said that some of His followers believe that. I believe intolerance comes from fear, and these folks are genuinely scared. When I said “Twitter that Michelle Shocked says “God hates faggots,” I was predicting the absurd way my description of, my apology for, the intolerant would no doubt be misinterpreted. The show was all music, and the audience tweets said they enjoyed it. The commentary came about ten minutes later, in the encore.

And to those fans who are disappointed by what they’ve heard or think I said, I’m very sorry: I don’t always express myself as clearly as I should. But don’t believe everything you read on facebook or twitter. My view of homosexuality has changed not one iota. I judge not. And my statement equating repeal of Prop 8 with the coming of the End Times was neither literal nor ironic: it was a description of how some folks – not me – feel about gay marriage.

The show, and the rant, was spontaneous. As for those applauding my so-called stance that “God Hates Faggots,” I say they should be met with mercy, not hate. And I hope that what remains of my audience will meet that intolerance with understanding, even of those who might hate them.

Folks wonder about my sexuality, but denying being gay is like saying I never beat my husband. My sexuality is not at issue. What is being questioned is my support for the LGBT community, and that has never wavered. Music and activism have always been part of my work and my journey, which I hope and intend to continue. I’d like to say this was a publicity stunt, but I’m really not that clever, and I’m definitely not that cynical.

But I am damn sorry. If I could repeat the evening, I would make a clearer distinction between a set of beliefs I abhor, and my human sympathy for the folks who hold them. I say this not because I want to look better. I have no wish to hide my faults, and – clearly – I couldn’t if I tried.

Read a follow-up statement from Shocked:

I believe in a God who loves everyone, and my faith tells me to do my best to also love everyone. Everyone: gay or straight, stridently gay, self-righteously faithful; left or right, far left, far right; good, bad, or indifferent. That’s the law: everyone.

I may disagree with someone’s most fervently held belief, but I will not hate them. And in this controversy, that means speaking for Christians with opinions I in no way share about homosexuality. Will I endorse them? Never. Will I disavow them? Never.

I stand accused of forsaking the LGBT community for a Christianity which is – hear me now – anathema to my understanding of faith. I will no doubt take future flack for saying so. I’m accused of believing that “God hates fags” and that the repeal of Prop 8 will usher in the End Times. Well, if I caused such an absurdity, I am damn sorry. To be clear: I am not now, nor have I ever been, a member of any so-called faith preaching intolerance of anyone. Again, anyone: straight or gay, believers or not: that’s the law.

That means upholding my punk rock values in the most evangelical enclaves and, in this case, speaking up for the most fearful of fundamentalists in, well, a San Francisco music hall full of Michelle Shocked fans.

As an artist in this time of unbearable culture wars, I understand: this means trouble, and this is neither the first nor last time trouble has come my way. And that’s fine by me.