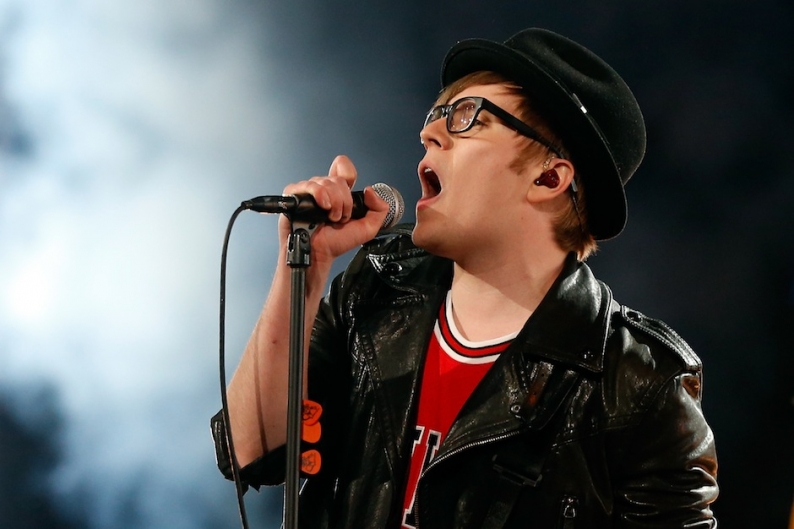 Fall Out Boy’s upcoming album, Save Rock and Roll, might have its work cut out to achieve its title, but frontman Patrick Stump is at least trying to save how we talk about pop culture.

In a 1,300-word blog post on Sunday morning, Stump compellingly argues that our online pop-culture discourse revolves around what we all ignorantly dismiss rather than what we love. And that this conversation based on loudly ripping on bands, singers, and actors without really knowing about them reveals our crippling insecurity about being caught liking the wrong bands, singers, or actors.

He’s not saying only professional critics should be allowed to have opinions. He’s just suggesting maybe we all as consumers of pop culture could spend our time more wisely than by trashing Nickelback again. Especially when the only Nickelback song we know is, like, “This Is How You Remind Me.”

“All of the agreed upon pariahs throughout pop-culture history put their identities into the thing we decry,” Stump wrote. “And yet we derive our own identities from the act of hating. We connect on the things we are disappointed in. Some may argue that nothing in history gathers a crowd like complaining about Lady Gaga’s meat dress. Near-masturbatory complaining has brought together more people than cheap liquor.”

It’s worth reading the whole thing in full below. Everyone will have their own reactions to Stump’s critique, but it’s praiseworthy that he started the conversation.

Some parts are hard to argue. “We’re so busy broadcasting our latest cultural disdain that we scantly notice anything we enjoy,” Stump wrote. “’Oh man, this Rebecca Black kid is terrible! Let’s laugh at her!’ has become more culturally relevant than ‘I really love this new Bilal record.'” In fact, the same Billboard chart rule changes that boosted Baauer’s “Harlem Shake” to the No. 1 spot would also have helped Black’s much-derided “Friday”; at some point, what we collectively pass around in scorn could out-chart what any of us individually, earnestly enjoy.

At the same time, as well-intentioned as Stump’s complaints are, it’s hard to see the discourse changing now that pop culture is so fragmented. People really do (or did) want to talk about Gaga’s meat dress, more than want to talk about whichever underrated artist any of us would prefer to champion.

And Fall Out Boy are indeed underrated in certain circles, but as the lead singer of a multiplatinum band, Stump is in an awkward position to be suggesting an end to kneejerk rejections; Nickelback might have less cultural capital than Neutral Milk Hotel, but they presumably have more capital capital.

What’s more, pop music isn’t classical; you might write a more useful review if you have relevant expertise, but you shouldn’t need elite credentials to have an opinion about “Gangnam Style.”

Still, what Stump is basically saying is maybe there’s not much more cultural mileage we can get out of “ignorantly dismissing things as loudly as we can.” He makes a comparison to the grocery store, where you might not like barbecue sauce, but you certainly don’t hang out in the barbecue sauce aisle “going ‘Haaaa! Fuck this thing!'”

How many people reading this are fans of Nickelback? How about Dane Cook? Now, I can safely assume that, unless this blog gets reposted on a site dedicated to those respective artists, those questions would be met with tumbleweeds and the distant sound of crickets. Like Creed or Limp Bizkit or the “Dude! You’re getting a Dell!” kid, they’ve become ubiquitously hate-able. I would not be exaggerating to state I’ve simply never heard someone admit to liking them.

Why is that? Now, I’m not saying I like them. Like you (fellow pop culture spectator) I am honor-bound by the unspoken law that, no matter what, I am not allowed to say anything positive about these artists. What have they really done wrong? Have they offended me? Not really. I’ve been more offended by Michael Richards famous rant or Sean Connery’s statements about hitting women. I still watch Seinfeld and James Bond movies. Hell, the misogynistic subtext of James Bond movies offend more of my sensibilities than anything Nickelback ever did and yet I don’t have any problem escaping to a world of fast cars and women with offensively suggestive names (Pussy Galore? Like…are we not even trying?) Somewhere in the world at this moment, some snooty contrarian is probably defending the paintings of Adolph Hitler. Yet for some reason, here I am crippled by a vague and probably unwarranted desire not to appear to be a fan of Nickelback and Dane Cook.

That’s sad. In this generation of blazing wi-fi and scathing tweets, I think it’s very easy to lose sight of anyone else’s opinion. We’re so busy broadcasting our latest cultural disdain that we scantly notice anything we enjoy. “Oh man, this Rebecca Black kid is terrible! Let’s laugh at her!” has become more culturally relevant than “I really love this new Bilal record.” I read an entire article examining why we as a society don’t like Anne Hathaway’s (in my un-necessary opinion, lovely) face. Well, criticizing art and the artists that make it is a lazier pass time than creating or appreciating it.

I’m not saying professional critics aren’t good at what they do. On the contrary; Some of my favorite writers are and have been. The problem is that now everyone has a blog. Everyone’s a critic. Hell, I have a blog. That I’m writing on right now. I have movie reviews posted on here somewhere. What gives me the right? The late Lester Bangs knew what he was talking about. Roger Ebert has written enough scripts to know when somebody sucked at writing one. They earned their stripes as have countless current critics (too many to list here and I think to name names would be a conflict of interest). These people are artists in their own right.

I’m an artist. Not necessarily a good one (and certainly not as a critic), but I consider myself one nonetheless. I look at the music I create as art. I work hard to craft it. When I perform, I make as many sacrifices as I find reasonable in order to perform to the best of my abilities. It affects the way I eat, the way I sleep, the frequency with which I can drink, the medications I take, the nightclubs I can go to (namely: None); I have to take my entire life a little more seriously if I’m going to not sound like the Cave of Wonders from Alladin. I study other musicians. I’m always working to improve my abilities as a songwriter or a guitarist or a producer or a programmer or a lyricist, etc. I’m sure Nickelback, at least somewhere in they’re career, are or were no different. They worked (and potentially still are working) to be the best damned Nickelback they can be. All of the agreed upon pariahs throughout pop-culture history put their identities into the thing we decry.

And yet we derive our own identities from the act of hating. We connect on the things we are disappointed in. Some may argue that nothing in history gathers a crowd like complaining about Lady Gaga’s meat dress. Near-masturbatory complaining has brought together more people than cheap liquor. “Who hates the government?” “Cheeer!!!!” “Don’t you just hate Justin Bieber?” “Huzaaaaah!”

What is it about pop culture though? We don’t have the same reactions to, arguably, more personal tastes/decisions such as food. We actually physically put food into our bodies. We are literally made of the things we eat. We don’t go into a grocery store and go “Ew! Hey, look at barbecue sauce! Don’t you just friggin’ hate barbecue sauce?” No. Because clearly tons of people love barbecue sauce and if we don’t like it, we will quietly opt out of eating it. There’s not instant value judgement in removing yourself from the crowd of barbecue sauce lovers. There’s also not a decided alternative to barbecue sauce because, hell, the whole damn grocery store is an alternative to barbecue sauce. If anything, in regards to pop culture, we don’t just go out of our way to avoid the things we don’t like; If it’s the grocery store we more or less put on our coats, brush the snow off our cars, drive across town, find a parking space, run into the aisle, and stand in front of the product going “Haaaa! Fuck this thing!”  All I can guess is this must simply be more entertaining than wasting time actually ENJOYING something.

You see it all the time in the music community. We partition ourselves off into little sub-groups. From those sub-groups, even littler still. When I was a kid I loved a Chicago hardcore band called Los Crudos. They’re reuniting and I’m excited about that. However, I would be (based on my career path) designated as either a pop-punk, emo, or outright pop-singer and therefor I feel a slight tinge of worry at my admission that I love Crudos. Part of me thinks “Wow, anyone who’s heard of that band almost certainly hates mine and will almost certainly hate me and want to disassociate themselves from me,”. I can’t watch the HBO show Girls (which I love) without thinking to myself “Oh man, these characters and maybe even some of these actors would probably be too ashamed to be caught dead even knowing someone who still owns a Fall Out Boy shirt.”

Now, I’m not saying everyone needs to go around playing nice and never admitting that they dislike things. That’d be ridiculous. But perhaps we as a culture have exhausted (at least for a little while) whatever can positively be gained by ignorantly dismissing things as loudly as we can. I started off talking about Nickelback. I really couldn’t tell you one of their songs. What qualifies me to say I dislike them? Dane Cook? He was actually pretty rad on that Louis C.K. show. Maybe next time I’m at the proverbial pop culture grocery store and someone offers me the proverbial barbecue sauce, I’ll politely decline and head to another aisle to purchase something I enjoy.