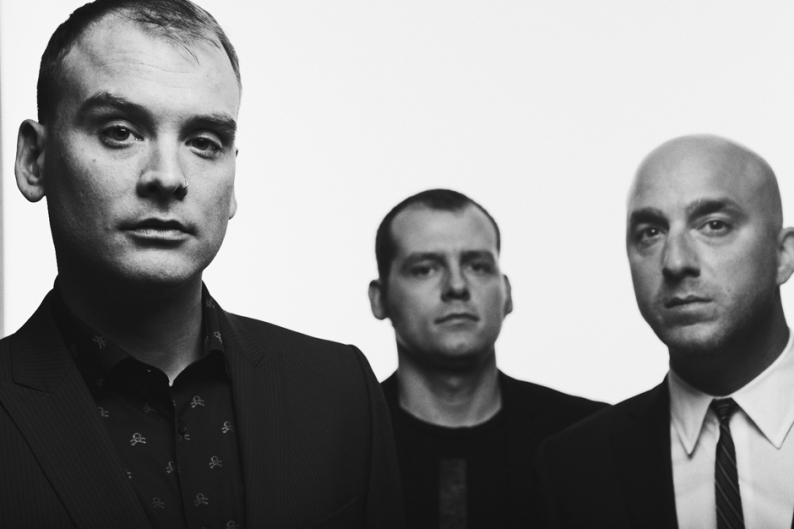 When the time came to record their ninth full-length album, Alkaline Trio opted to congregate in snow-dusted Fort Collins, Colorado, an idyllic college town about an hour outside of Denver. And there, in the “foothills of the Rocky Mountains,” the Chicago-bred outfit teamed up with punk legend Bill Stevenson (Black Flag, Descendents, All) at Blasting Room Studios to capture what would become My Shame Is True, a sabre-toothed improvement on 2010’s back-to-basics, return-to-form effort This Addiction, as well as what sounds to be frontman and chief songwriter Matt Skiba’s most personal set to date. Below, stream the album in its entirety (exclusively for 24 hours!) and read Skiba’s thoughts on those dark times that helped birth it.

After nine albums, why put out a more personal record now?
For the songs I write there’s this unintentional theme. There’s always something outside of the band that has my attention whether it’s good or bad, and on this one we didn’t exactly plan on making a “personal” record — it just happened that way. I went through a lot since the last record and this one, like going straight out of a gnarly divorce into a really great, beautiful relationship that came to an end just as we started writing My Shame Is True.

So that breakup fueled the writing of the new record?
This record was catharsis. I wrote it in a way that I’ve always tried to stick to, the way we used to write when no one was listening or we didn’t think anyone would hear it. I just wrote this one more as like a love letter to my ex-girlfriend or an apology note set to music.

Has she heard the record then?
She was the first to get a copy! We’re still very close and she’s even who you see on the cover of the record. Like any good breakup there’s never a clean break. You go back and forth and try and fix it and you’re still hooking up or whatever. So this record represents that sort of confusion and pain and at times relief and happiness that sometimes blows up in your face.

What was working with Bill Stevenson for the first time like?
It was incredible. We got to the studio in Colorado just as winter was starting and we saw the season’s first snow, which was such a cool atmosphere. I’m getting all hippy, but it was a rad environment. Plus, working with Bill and his staff at the Blasting Room was such an efficient experience. There isn’t a moment in that place wasted.

Does working in a relatively peaceful place like Fort Collins mess with you at all when recording? Your music often hits some dark places.
Well, all the songs were written before we went in there. “Until Death Do Us Part” was written post facto. When you record you always leave the drums and a mic set up because someone might strike gold in the middle of the night drunkenly writing a song. We have this song called “Radio” and I wrote that song when we needed one more song for a record. So I went back into the other room and wrote it in 20 minutes. Same thing with “Until Death Do Us Part”: We didn’t need more songs but we did need this one for the dynamic of the record. I think being in that setting — and I’m a firm believer in duality — you have darkness and light. All of us do. The writing in those dark places happened a while ago. So being in this beautiful, peaceful setting was like we went to these dark areas and now we get to enjoy the beauty of our surroundings and the studio. I want recording to be fun. This definitely didn’t fuck with our mojo in the studio.

Tim McIlrath from Rise Against shares vocals with [bassist] Dan [Andriano] on “I, Pessimist.” How did that come about?
We’ve all been friends since growing up in Chicago. I’ve known Tim as long as I’ve known Dan, since we were all in high school. We’ve always been tight with the Rise Against guys. Dan wrote that song with Tim in mind. He wrote it specifically for his voice. It all came from our long-standing friendship.

Speaking of long-standing friendships, Brendan Kelly [Lawrence Arms, Slapstick] also provides vocals for the record?
He sings on “I Wanna Be a Warhol.” I wrote that song with this sort of raspy, Blake Schwarzenbach-like grindy throat in mind. Brendan was the man because he’s such a great singer with a voice that’s thrashed in the best way. That was the same thing as Tim. We all grew up together. We’re brothers, all of us.