Swede and Sour: The Strange, Sardonic Return of the Embassy

After seven years away, the influential "punk funk disco" duo are back to mess with your minds 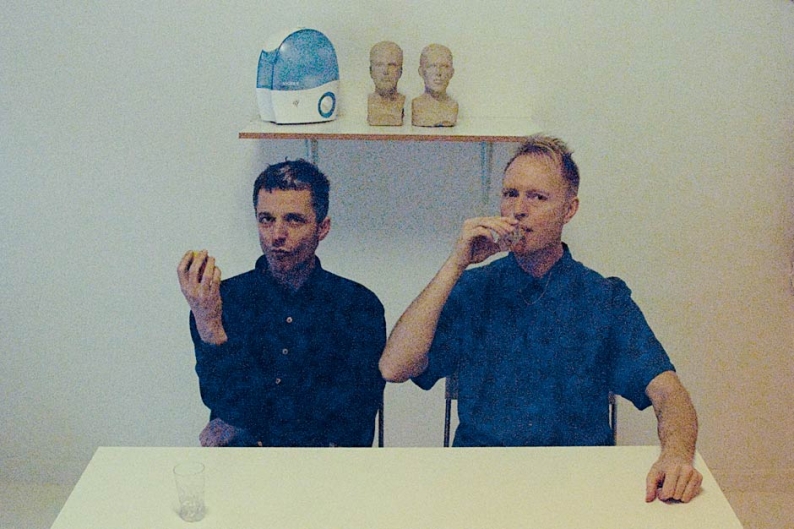 For a band that’s gone more than seven years between albums, the Embassy have adopted an aggressively preemptive attitude on the new Sweet Sensation:

I don’t think you can survive if you take it totally seriously. I’m quite happy to just do a few gigs. I think I’d really hate to play loads of gigs and stuff. It’s something that I do. I’m not gonna be a professional musician. Well, it’s not true.

With the above, from the album’s second-to-last track, “U,” the Gothenburg, Sweden-based duo turn defense into offense, detering any possible ill-prepared interrogators with stand-offish quotes from ramshackle ’80s romantics and Kurt Cobain favorites the Marine Girls. That group’s singer, Tracey Thorn, who went on to commercial success with ’90s dance hit-makers Everything But the Girl and solo freedom as a wry singer-songwriter — with a break to raise three kids in between — might be the very model of Embassy-style success: She did it her way.

But if Embassy singer-guitarist Fredrik Lindson and producer-programmer Torbjörn Håkansson are endorsing Marine Girls’ shrugging banter, you won’t catch them admitting it. “The sample is not really a statement,” Håkansson writes via e-mail while on a brief tour of Sweden. “We like the sound of their voices. Being a professional is okay, but for us it’s hard. We’re into things like irrational logic, simulation, and shoplifting. We wanna make groovy music from the bottom of our hearts without knowing how.”

Though still little-known among U.S. audiences, the Embassy helped launch a mini-movement of similarly wholehearteded and groovy musical autodidacts. “Thankfully they stayed as naïve as they were cynical about it all,” say the liner notes to the Embassy’s 2002 debut, Futile Crimes, the inaugural full-length on hometown label Service. “Or maybe it’s the other stupid way around.” Service would later put out albums by fellow Gothenburgers Jens Lekman, sweet and tender hooligans the Tough Alliance, and blunted space-disco masters Studio; the latter two would name their respective labels Sincerely Yours and Information, after Embassy songs.  Melodic, beat-driven, and shiny enough to scan as commercial pop, but with wounded vocals and occasionally sloganeering lyrics that do, indeed, blur the line between innocence and a giant put-on, the Embassy inspired other artists with its iconoclastic spirit as much as its ecumenical anorak-house sound.

The Tough Alliance’s Eric Berglund, who recorded a 2010 solo full-length as ceo and continues to run Sincerely Yours, writes in an e-mail, “What Embassy made me feel when I was younger was extreme and exclusive. No need to explain, if you feel it you feel it and if you don’t then nothing I say can make you feel it.”

Futile Crimes and its fine-tuned follow-up, 2005’s Tacking, each snagged the Embassy a Manifest Award, Sweden’s Grammy alternative for indie labels. Lindson and Håkansson then focused on a string of singles, finally compiled on 2011’s album-quality Life in the Trenches, which in a way sums up the duo’s whole wonderful, strange universe with a poignantly tender polyglot-dance finale cheekily titled “Who Put the Ass in Embassy?!”

Before that, though, Lindson had briefly decamped to Los Angeles to form a project with Studio’s Dan Lissvik called the Crêpes, releasing one album in 2009. The time apart, Lindson says, gave him new perspective on the Embassy: “A way to look back and a new focus forward,” he writes.

Meanwhile, the Embassy’s outlook spread to a cadre of North American artists who, like them, saw that sincerity didn’t have to take itself seriously, and that pure self-expression could also be surface-level pretty. Jonny Pierce, frontman for Brooklyn band the Drums, describes the Embassy as “in the most endearing way, the poor man’s New Order.” Two dance-pop bands with post-punk DNA, New Order and the Embassy have obvious sonic similarities, but Pierce points to their shared willingness to show weakness: conventionally questionable vocals, vulnerable lyrics. The Embassy “were our number one influence when we were starting the Drums, for sure,” enthuses Pierce, who’s planning a 2013 solo album. “I was always so excited to listen to them, because it sounded like they really meant what they were singing, and they were going to do it whether they technically could or not.”