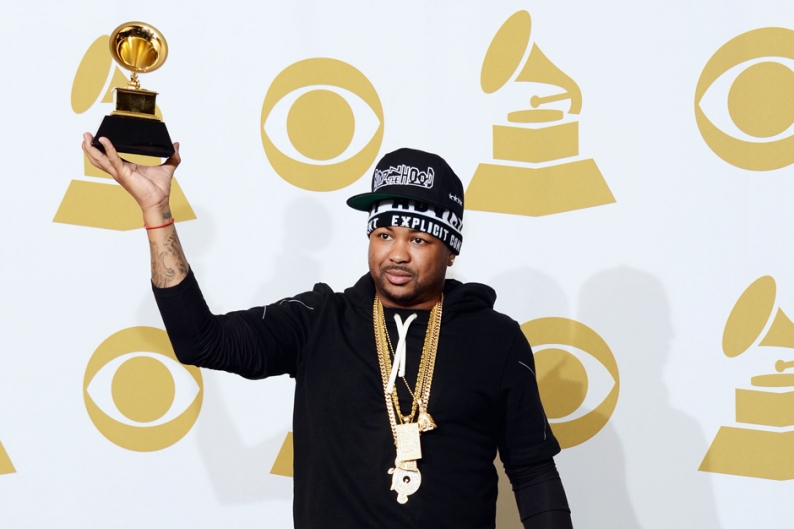 Alt-R&B maestro and R. Kelly progeny The-Dream has at last announced a realistic release date for his long-delayed fourth official album that was once called Love IV MMXXII but now bears the name Fourplay, Billboard reports. The follow-up to 2010’s Love King will be out May 7 via Def Jam, of course (he’s the label’s executive vice president of A&R). The new name breaks with his LPs’ titular theme thus far — there was 2007’s Love Hate and then 2009’s Love vs. Money — but perhaps that’s because he reset things somewhat last year by reissuing his fantastic 1977, originally issued as a free mixtape under his birth name, Terius Nash. Fear not, as he promised the pressroom at the Grammys last night that he has renewed his commitment to creating “authentic love-making CDs.”

The-Dream picked up a statue last night for his work on Jay-Z and Kanye West’s Frank Ocean showcase, “No Church in the Wild.” In accepting the award, Nash got burned by Jigga for his goofy headwear: a Boyz n the Hood Hat perched atop a “Parental Advisory: Explicit Content” beanie. A man of few words on the podium, Jay quipped, “I’d like to thank the swap meet for his hat.” Backstage, The-Dream told the press that he actually purchased the cap at Los Angeles-area adult novelty store Spencer’s. He also mentioned that he’s headed to Paris soon to work on Kanye’s highly anticipated follow-up to 2010’s rather magnum opus-y My Beautiful Dark Twisted Fantasy.

Producer Malik Yusef (MBDTF, G.O.O.D. Music) also visited the pressroom and teased the upcoming Yeezy platter with the following somewhat confusing statement: “Let’s just say, remember black music, the black experience, the good and the bad, the grim and the bright. It’s a throwback to that era and a distilliation [sic] of what’s happening in the modern world. Of course, we like to travel and shop and all that.” He also explained that although his work with West brings him to places like Hawaii and Paris, “It’s like being in a work camp.” Also, he called his boss “harsh,” but then again, dude is a poet so he’s probably kinda sensitive.