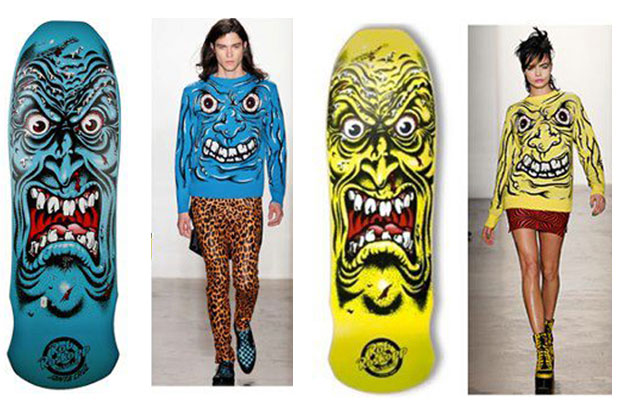 When beloved designer Jeremy Scott showed his A/W 2013 collection in New York last week, we were definitely feeling the Bones Brigade — the drippy, crazed cretins he printed on skirts, sweaters and trainers looked just like the designs on the bottoms of every skateboard circa 1989. (They also brought to mind a little Danzig.)

Well, turns out we weren’t just experiencing nostalgia: a post on the Facebook page of Jimbo Phillips — the legendary designer who, along with his father Jim Phillips, actually did the art for Santa Cruz Skateboards in the ’80s and ’90s — compares Scott’s garments with his own back catalog, and it looks like someone did indeed get jacked. Under the header “this is crazy!,” you can see the, ahem, similarities between the designs of Phillips’ iconic goopy dudes and the ones Scott put on his clothes, apparently without permission. Another Facebook page that appears to be unrelated to Jimbo Phillips uncovers even more of Phillips’ designs that somehow wound up on Scott’s clothing. And elsewhere, the Tumblr Vampirestatebuilding points out that another piece in Scott’s A/W 2013 collection appears to have appropriated a stencil by the political artist Michael Roman, an iconic skull look which ended up on a drum case carried by Madonna in Desperately Seeking Susan.

Jeremy Scott is well known for his lust for youth culture and nostalgia, and these graphics are right in line with his sensibilities: last season he threw Bart Simpson all over a $500 sweater and no one batted an eye. But “repurposing” in the Internet era becomes something slightly more sinister when your source material is not already a household name. Matt Groening can take a hit, but we’re betting that Jimbo’s not sitting on a multimillion-dollar industry based on some trippy faces he came up with in the ’80s. Of course, fashion ripping off cool kids is absolutely nothing new: Marc Jacobs has built a career off reselling youth culture to fashionistas at an astronomical mark-up. But it’s a huge bummer when someone who ostensibly identifies with that culture ends up coming off like a mere culture vulture. Even if Scott’s clothes diverge just enough from Jimbo’s designs that he can avoid any kind of copyright suit (which, at press time, has not been announced), he risks alienating the very crowd he hopes to entice.