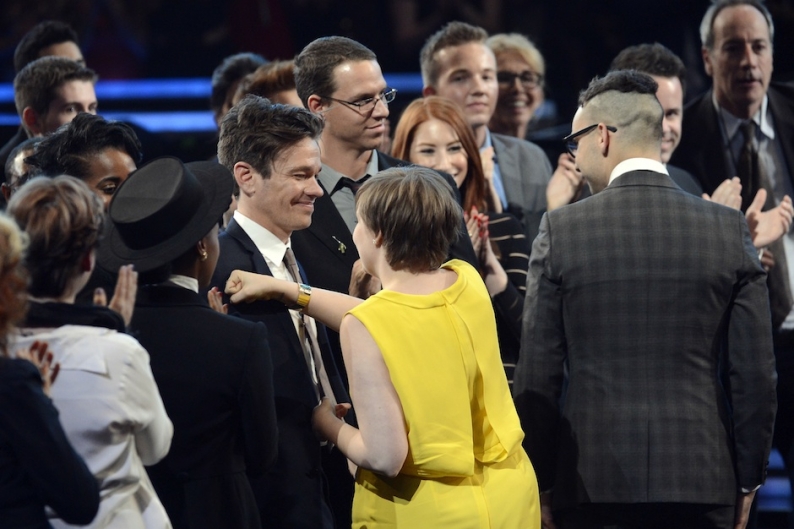 Sunday evening I had the privilege to attend the 55th Annual Grammy Awards, at Los Angeles’ mighty redoubt of professional sports and Alicia Keys concerts, the Staples Center. I had to go stag, which was exciting, because think about it: when do you ever hear of someone going to an awards show alone? How sad would it be to see, say, Keira Knightley sitting alone at the Oscars, next to an empty seat with her wadded-up jacket on it? Or Daniel Craig at the Golden Globes, squatting alone with a plate of cheese in the corner and trying to look all casual about it?

But tickets to these things are scarce, and I couldn’t really complain seeing as I had no business being at the Grammys in the first place. I am a TV writer with only the most tenuous of connections to the music world. Things about the Grammys scare me. Like the ambiguity in their dress code.
Usually we can all agree that black tie means black tie. But for the Grammys, “black tie” really means “please just don’t wear anything that would get you banned from a public pool.” This year’s biggest pre-ceremony buzz came courtesy of a leaked memo from CBS to Grammy attendees, begging them to avoid showing their nipples, genitals, and “bare fleshy under curves of the buttocks.” This was a sad development for nudity-loving viewers, but sadder still for attendees who had put so much effort into tracking down formalwear that was flattering to their exposed nipples, genitals and buttocks. You can’t find that stuff off the rack at Men’s Wearhouse.
I knew I was going to wear a tux, but I wanted to add a little touch of flair, so instead of a black tie I wore… a yellow tie! Problem solved. Next stop, Grammys!
Doors opened at the Staples Center at 3 p.m. I got there at 2 and spent a leisurely hour strolling the grounds in my tuxedo and looking at non-tux people like they were dirt. Along the way I noticed a brass plaque embedded in the sidewalk honoring the 1996 Grammy winners, including “Best New Artist” Hootie and the Blowfish. I sincerely hope that as 2013 Best New Artist winners fun. made their way from the ceremony they did not spot this plaque and write one of their big, Lion King-y emotionfests about it.
The first thing that dawns on as you enter the Staples Center is that it’s the Staples center, and as such, it’s very large. You feel special getting to go to the Grammys, but in reality the event is about as exclusive as the KIIS FM Jingle Ball. You’re greeted at the door not by tuxedoed waiters bearing complimentary cocktails, but by a guy with a box around his neck offering you Red Vines for $5 and $4 Dasani bottles without the caps (“Don’t know why they won’t let you have the caps,” a vendor told me, “but I think it’s so you don’t throw ‘em”).
Celebrities do not mill about all around you before the show. Puffy entertainment lawyers wearing Stones T-shirts under their tuxedo jackets, trailed by a bored wife with mega-cleavage and a 9-year-old son in a plaid fedora: these are the people who swarm the halls of the Staples Center on Grammy night. I wandered for a good hour in search of a celebrity to tweet about or at least stand uncomfortably close to, but without any luck. Honestly, you could have scanned the room and thought we were gathering for a matinee of Shrek the Musical.
I took my seat with about 15 minutes to go till airtime. On either side of the stage little goat pens full of attractive young extras practiced jumping up and down and screaming. Red umbrellas and what looked like a sex swing hung from the rafters. Off to stage left, a man in a white tux and top hat paced nervously on stilts while twirling yet another red umbrella. Performers took their places. I decided it was time to dig into my bag of Grammy-watchin’ Skittles.
Following a pep talk from Grammys executive producer Ken Ehrlich in which he assured us LL Cool J would be a splendid host and that if we were really good LL was even going to rap for us, the lights dimmed, and the opening number began. Taylor Swift. Crazy circus theme. Guy in a flame-throwing wheelchair rolling all over the place. Another guy in a creepy bunny suit, just hanging out. Solid entertainment, and I mean that sincerely.
I won’t bore you with a blow-by-blow of the ceremony. There were some fantastic performances (Miguel! Jack White! The Levon Helm tribute! Christ, even the Bruno Mars reggae thing was outstanding). And inevitably there was dreck (I’m sorry, I still want very badly to grab the Mumfords and Lumineers by their suspenders and shake the farm out of them). But I’ll just talk about Frank Ocean.
Ocean had been onstage a couple times already before his performance late in the show. He’d seemed awkward and a little shy accepting an award with Jay-Z and The-Dream, and the unease carried over to Ocean’s moment in the spotlight, when he played his oddball ballad “Forrest Gump” from behind a projection screen that made it look like he was running in place. (The Grammy people should save that technology in case Ocean ever writes a song called “Lieutenant Dan” and they need to make him legless.)
For the life of me I can’t tell you if “Forrest Gump” was a classic, sui generis Grammy moment or a train wreck for the ages. The ladies next to me gasped and giggled at every mention of the titular character (“Is he really saying Forrest Gump?!”) and Ocean himself seemed off his game. But I loved it, in part because it spoke to my own Grammy night experience. If Frank Ocean can stand alone in front of an audience of millions, wearing a bright yellow suit and singing a tender bisexual love song called “Forrest Gump,” how could I have ever felt awkward about going stag to an awards show in a stupid yellow tie?
After Frank Ocean, I was done with the Grammys. I threw away my capless Dasani, tucked the bare fleshy under curves of my buttocks back into my slacks, and went home.