The last time Dave Grohl filled in as a guest host on E! late-night show Chelsea Lately, he revealed he’d made out with Kid Rock’s mother. That must not have been enough to discourage the Foo Fighters frontman and former Nirvana drummer from returning to late-night duties, because he’ll be pitching in again on Chelsea Lately every night this week, at 11 p.m. EST/10 p.m. CST. No word on whether Kid Rock’s mom will be there.

A few clips from Grohl’s current guest-hosting stint are already on YouTube. In the video above, he gently pokes fun at Beyoncé’s masterful Super Bowl halftime show performance, tossing out a “Single Ladies”-related bon mot he’s no doubt been saving a few years: “Am I the only one that realizes that that’s basically a rewrite of the theme from The Jeffersons?” Which, he’s obviously joking, but yes, sorry, he’s probably alone on that.

Below, you can watch Grohl tease Britney Spears for failing to land a Las Vegas gig. It’s probably the show’s fault for picking an unflattering Spears photo (hint: It’s easy! And mean). But we do wish Grohl hadn’t said, “There’s nothing behind her eye[s], there’s nothing in her boobs anymore.” As one of rock’s truly solid guys, Grohl knows better than this.

At the bottom of this post, there’s also a goofy sketch where Grohl self-mockingly blames his hair-drying needs for the Super Bowl power outage. No complaints here about that one, though we’re still going to ignore “facts” and “statements from the NFL commissioner” and pretend Beyoncé’s dominating dance moves shut the place down. 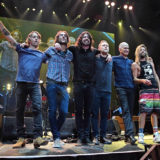