Fade, the forthcoming 13th album from Hoboken, New Jersey dream-fuzz trio Yo La Tengo, is somewhat curiously titled. Despite the album’s mellow vibe, its 10 John McEntire-produced tracks illuminate a range of emotion that suggests singer-guitarist Ira Kaplan, his wife, drummer-vocalist Georgia Hubley, and bassist James McNew are still burning brightly. But perhaps the titular irony is intentional. YLT are, after all, known as much for their canny sense of humor as they are their sneakily consistent discography of swooning feedback-rock.

Enjoying a much-deserved post-holiday break at a friend’s home in Montauk, Long Island, Kaplan, 56, spoke on the phone about Yo La Tengo’s nearly 30-year history and how his undying New York Mets fandom serves as both inspiration and cautionary tale.

You never know if you’re gonna feel inspired enough to make another record.
There was actually a time quite a while ago when I remember our booking agent saying, “Ya know, you can now do this as long as you want. Whatever audience fluctuations will happen, you can count on there being enough people to make it possible for you to do this. It’s up to you at this point.” But on the other hand, I would say every time we finish making a record, there is that question, like, “Wow, I wonder if we’ll ever make another one?” You always feel so depleted. Not in a bad way, but we’re all sports fans, so we rely on the sports cliché as much as any athlete. You just leave it all out on the floor and wonder: Will anything come back?

You’re gonna feel horrible at times.
Just try and ride that part out without too much collateral damage. I think one of the things we have learned — which has made it a lot easier — is that we really know there’s gonna be low moments, and they don’t necessarily mean what they feel like in that low moment. We literally got home from recording [1997’s critically acclaimed] I Can Hear the Heart Beating as One and called up [producer] Roger Moutenot and said, “We listened to the rough mixes on the way home, and it’s a complete disaster. We’re just gonna have to start from scratch and throw this in the garbage.” And he very calmly just said, “Well, if that’s what we have to do, that’s what we have to do, but why don’t you listen to it again tomorrow and maybe it will sound a little different?” And, of course, that’s exactly what happened. What we learned was, stop listening to your rough mixes when you’re in the van leaving Nashville. 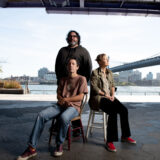 Yo La Tengo Reckons With This Stupid World on New LP

Change happens whether you want it to or not.
We’ve never done much other than try to do something that sounds good to us, and that’s really kind of it. Things that have changed have changed naturally, not because we felt any pressure to be different. It’s something we’ve spoken about before — that if we made a record that sounded exactly like the one before it, that in itself would be so different it would qualify as change. So it’s not something we’ve worked very hard at trying to make happen.

It’s pretty easy to forget anyone’s actually going to listen to our record while we’re making it.
We have no perspective. We’ve got our eyes one half-inch from this. When people started reacting to And Then Nothing Turned Itself Inside Out, focusing on the words so much, I was completely taken by surprise. On that one, I knew the words were different than previous records had been, and there definitely were times when the ones I wrote, I’d show them to Georgia and James and with their support and encouragement, we kept moving forward and taking that as encouragement to go deeper. But I really thought that was the end of it. I didn’t think anybody else was gonna be listening. That’s one of the pleasures of immersing yourself in [the recording process]: You’re really just dealing with how best to make the songs work and not really thinking about other aspects, like how to play it live. I also don’t think any of us think that much about our old records. I know [Fade] is open and emotional. Whether it’s more so than previous records, I just don’t know.

You just listen and count on yourself to know it when you hear it.
We were writing [Fade] as a band, and some songs happened very quickly. We can be just jamming and a full-fledged song without lyrics can emerge. And then other songs won’t come out that quickly, and it’s the same way in the studio. Some things are getting tinkered with pretty elaborately while we’re mixing, and other things are kind of moving in a pretty straight line.

It’s the Mets fan in me that recognized success and failure in a variety of ways.
The aspect of being a Mets fan that I think is helpful to me is contrasting it with the stereotypical Yankee fan who thinks that to not win the World Series is to equate that with failure. I feel, at this point, like [Mets owners] the Wilpons are my friends in ways I never realized. I’m now thinking these guys are looking out for my best interests and saying, “You’ve spent a lot of time worrying about New York sports teams, and maybe it’s time to stop caring and move on to other things. And as deplorably as ownership has behaved over the years, we’re gonna be even worse and keep being even worse until you stop caring and really get the message that there’s no earthly reason to invest any of your emotion in these teams.” And I appreciate them looking out for me that way.

I can understand why we’re not for everybody.
I’m sure there are people who would look at us and say, “Why would I want wisdom from this group? Why would I ever want to be doing this for 25 years and never become any more popular than we’ve become?” I do understand why some people would look at us and think, “Wow, that’s amazing,” ’cause I think so. But I think some people would want to know, “How can I make sure that my band never becomes like this?”

Words of Wisdom, Yo La Tengo