“I feel like I was a real cocky motherfucker when I first started doing this,” Nathan Williams says of his Wavves project. “I really believed I was the shit. Now, not so much, but as a songwriter, I think I’m better. You know the tone of [2010’s] King of the Beach and the first two records? Like, I ‘got no car, got no money,’ but, I still got my parents’ house to live in so it’s not that bad. It could have been much worse, and now, my parents have no money and I’m paying their rent while I’m paying my mortgage. In general, the realness of life starts to hit you later on. That’s more prominent on this record.”

Still tentatively slated to arrive March 26 by way of new label home Mom + Pop, Williams’ fourth full-length now has a (tentative) title as well: Afraid of Heights. Recorded at Sonora Recorders in Los Angeles’ Los Feliz district, the album is, as Williams describes it, a record that’s also rich in perspective. “Maybe six or seven of these songs actually take samples at some point from my original demos,” he says. The interstellar gauze of “Mystic,” for example, was built around a loop dating back to 2007. “That was the year my parents bought me a computer,” Williams explains. “It was the first computer I ever owned, and I think that was the third or fourth session that I’d ever started in GarageBand. It was kind of cool to use that stuff. It goes back to the first couple of records and places them in a totally different context.”

But the homespun qualities that defined much of his debut material are largely absent here, Williams, Pope, and producer John Hill (Rihanna, M.I.A., Santigold) having committed themselves, over the course of an entire year in the studio, to crafting a colossal, self-financed studio album, free of label expectation. “It’s easy to say we wanted it to sound big,” Pope says. “But we did. Five days a week starting last January, we’d go in at noon or one and stay until two or three in the morning. It was more than having a full-time job.”

And though Hill’s pedigree and Williams’ continued exploration of beat-oriented textures with Sweet Valley (as well as his touring work with GZA and recent writing credit for Big Boi) has led to suggestions that Afraid of Heights might be Wavves’ hip-hop album, the duo doesn’t hear it. “There is some programming and we did build some songs off of samples and loops,” Pope says of the claims, “but I don’t hear hip-hop in it. Sonically, I think we expanded a lot on this album in finding sounds in general; I’m really proud. John does mainly pop and hip-hop stuff, but if you listen closely, it sounds really cool. He’ll spend hours, for example, listening to Cambodian pop music from the 1970s, and then try to re-create those sounds using instruments he gets on eBay.” 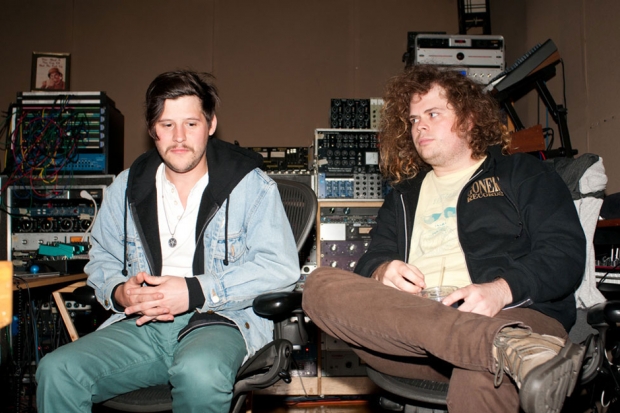 What listeners will discover instead is a shimmering, screwballing, fully immersive pop-punk record that draws influence not just from the gargantuan choruses of Weezer’s self-titled debut (“I was listening to the Blue Album every day,” Williams says. “Almost on repeat”), but terse expressions like those found on Agent Orange and Wire’s Pink Flag. Additionally, Williams and Pope welcomed the Bronx’s Jorma Vik to contribute drumwork and another new friend and fellow Los Angeleno, Jenny Lewis, into the studio to provide vocals on what would become the album’s title track, as well as the recent Adult Swim single (and non-album cut) “Hippies Is Punks.” “I’m still a little starstruck when I see her, because I went through a Saddle Creek phase when I was 15,” Pope says of Lewis. “I was kinda into Rilo Kiley and obviously The Wizard is just amazing. She also brought us cookies. Weed cookies.”

And, after a year away from the road, starting at this year’s SXSW conference in March, Wavves will embark on a six-week North American tour to be followed by an additional spate of European dates over the summer. While support has yet to be confirmed, Williams spent a while looking for the right opener. “Usually, when you’re booking a tour, the first band to play is really thirsty and hungry and entitled, just like we used to be,” Williams says, “But when we were asked to think about who’d we want to see, it was like, we spend most of our time on tour looking up Korn cover bands, so for two months Steven and I tried to find a good-but-not-great Korn cover band that would go on tour with us for a few hundred bucks a night. But to no avail. It would have been awesome.”

Still, despite Williams recent, Korn-y antics online, he says Afraid of Heights‘ highlights “Paranoid” and “That’s on Me” (which includes a line reminsicent of Nirvana’s “Come as You Are”) finds him at his most honest as a songwriter. “I’ve always been fairly honest,” the recent SPIN cover co-star explains. “But since people know me and the relationship I’m in, they could take out parts of a song like ‘That’s on Me’ and know exactly what I’m talking about.”

In The Studio, Wavves