Mike Patton, Duane Denison, John Stanier, and Trevor Dunn are back in the saddle 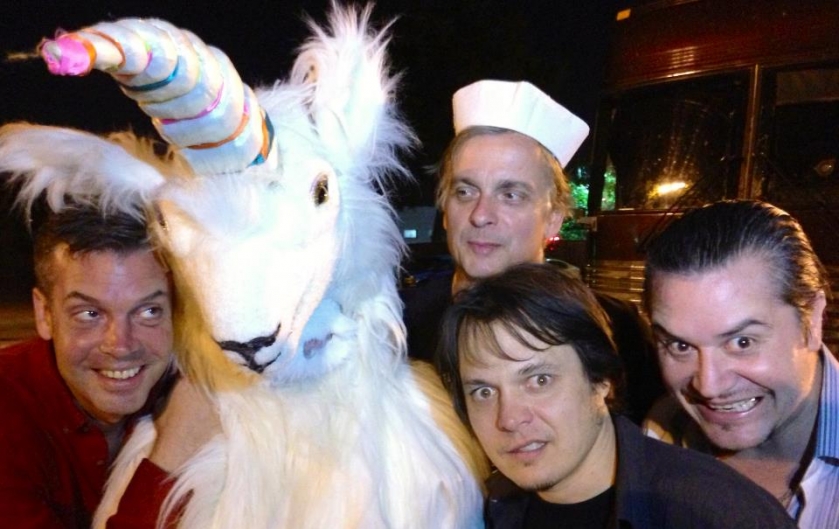 “The one thing I wanted to get across,” says lead songwriter Denison, “is that I wanted it to be fun and exciting and rock, in the rock sense of the word. This is not dungeons and dragons. This is not sausage party in the church basement, hardcore party with dudes only. No, this is meant to be played in huge clubs with alcohol and drugs and dancing girls and all those good things. You know we wanted to do it in a way that wasn’t stupid that has some depth and intelligence and insight to it. Whether we pulled that off, you guys are the judge.”

Decide for yourself with our exclusive stream, and read our interview on the odd makings of Oddfellows.

Your projects as of late have been a lot of soundtrack work, musique concrète, avant-jazz, and orchestral pop. What’s most satisfying about the traditional rock band format?
Mike Patton, vocals: There’s still something attractive to me about it. I guess on a personal level it gives me a jones since I don’t really write that kind of stuff anymore, not that I ever did. More traditional guitar, bass, drums; it’s not something completely natural to me. It’s in a way, exotic.

You guys all live in different parts of the globe. How does this band happen?
John Stanier, drums: People ask “Where is Tomahawk from?” I don’t know, the U.S., I guess?
Mike Patton: There’s two of us in New York so I guess we’re a New York band. We’ve never really been a typical band that says, “Hey let’s meet on Tuesday and practice for three hours.” To be honest I’ve done that and I’m not really into that anymore.
Stanier: It’s always Duane sniffing around asking if we want to do another Tomahawk record. And everyone, of course, is like “Yes, absolutely.” And then another nine months will pass and he asks again and then everyone says, “Yes, definitely.” We’ve probably been talking about doing this record for the last two years.

Does he send CDs in the mail?
Stanier: Maybe the last couple of times he’s finally started to send MP3s. But even five months ago six months ago, he was sending actual CDs.

And the actual recording…
Stanier: We meet up and rehearse for a little bit and bang it out. Then everybody goes about their merry way and we meet up again for tour. It’s the absolute simplest, most professional ensemble I have ever been involved with, by far. Even for this record, I swear, we rehearsed for like a day and a half, if that.
Patton: I flew in and then we were going to rehearse for a week and then record. The day after I flew in I got some really bad news about some family stuff and then I had to leave the next day. So I wasn’t able to record in the same room with those guys, which is what we intended all along. It wasn’t as intended, but I think it came out alright.
Duane Denison, guitar: Things are a little slower here [in Nashville], you can take your time doing things, things cost less. Rehearsal spaces are cheaper. Studio time is less. Everything is less. And so when these guys come here, you feel like you can take your time and allow your ideas to gestate a little more. We can go get, oh, I don’t know, catfish or barbeque or something like that. You have time to think about what does it really mean to you. You’re kind of away from the media centers here, so you’re not under the microscope all the time. You don’t feel like you’re on the clock and somebody’s watching you all the time. There’s a reason why this is becoming more and more popular here. There’s a reason Jack White moved here and the Black Keys moved here, and other people are coming down here. Atlanta’s kind of a hip-hop and R&B thing now. People are warming up to the South.

Are there any non-musical influences on the record?
Duane Denison, guitar: We would say, “What about a dark or heavier Beach Boys? Or what about a more dissonant or driving reggae/dub thing? Or what about a gospel get-down party with ghouls and zombies.” As far as extra-musical things, there’s a very well-stocked bar in the studio, too. That helps. I’m not going to be stupid and say, “Aww, we’re Tomahawk we drink bourbon and eat buffalo burgers.” But we did.

What did you do when you weren’t recording?
Denison: We just put in such long days that when we were done we’d maybe just go out for a casual drink. One night when we were recording, the Black Keys did a secret show in their rehearsal space. One day I took them over to the Third Man compound, that’s Jack White’s place, where he has a little record shop and that’s literally around the corner.

Mike, you were in California, how did you motivate yourself to record?
Patton: First of all, you’re wrong. You don’t have to motivate yourself to do this shit. At least for me, it’s not really work, it’s more like a bodily function. I do it and it feels good and it’s fun

OK, so what was a day of home-sessions like?
Patton: A normal day is running errands and doing bullshit until like three a.m. and then working until you can’t see straight. When your eyes start burning from looking at a computer for too long. When you have to put on shades in the studio you know you have to stop. For me it’s like, “I have to stop this. Oh, I haven’t eaten all day. I’ve recorded tracks where I heard my stomach growling in the microphone.” That’s what I mean about it not being work; the process of doing it is just something special.

Are there rock qua rock bands you are listening to right now?
Patton: It’s a good question because I don’t really have a good answer. Nothing off the top of my head to be honest, it’s just not something I listen to on the day-to-day. That’s not where my head’s at.

Don’t you have any old rock records you listen to as comfort food?
Patton: You don’t want to eat haute cuisine all the time, it’s not healthy. Years ago we said we should do a Bad Brains cover record. So we chose one and I chose one and Stanier or Duane chose another one, so we said, “Let’s do a medley.” Bad Brains is part of our collective comfort diet. We did “How Low Can a Punk Get,” and a medley of it with “Pay To Cum.” Total, like you said, comfort food. Sit down at the table and uh…smile.
Trevor Dunn, bass: I still listen to those first few Cheap Trick records all the time, but that first one in particular stuck with me. Dream Police and the one that came after that, All Shook Up, are kind of weird records for a so-called “straight-ahead rock band.”

Right after you recorded Oddfellows, you guys played your first shows in nine years.
Dunn: Basically the first show I played with Tomahawk was the day after [the Melvins’ 51 States in 51 Days Tour]. I was hoping to stay in Hawaii at the end of that Melvins tour. I’d never been that before and I was just going to chill even if I was there by myself. Then the Tomahawk tour came up and I flew the next day to Nashville. I got there at like 4 in the morning and took a cab to the hotel and I slept for a couple of hours. But I kept being woken up because they lost my bag. I finally got it back then went to the venue and loaded my stuff onto the bus. We basically ran the set once, we ran each song one time. Those guys rehearsed the day before without me and I’d been doing my homework in the van. At least half of the stuff was old material that I’d never played before. Duane and I went over things quite a bit when I was in Nashville helping him mix the record.
Denison: Trevor and I rehearsed even in the studio. Talk about multitasking: while we were mixing, Trevor and I would run through the old songs from the previous albums.
Dunn: It wasn’t like it was completely out of the blue, but I was tired. More than anything it felt like culture-shock jumping from one band to the other with little time to relax. Literally no time. I guess I slept a little on the plane.
Stanier: He flew from Honolulu and arrived the day of the show for our very first show in nine years and we pulled it off. I wouldn’t recommend it to anyone. I don’t know how we do it. There’s no way Battles could ever do it. I think the bottom line is that everyone knows we have other stuff going on so no one wants to waste anyone’s time. So it’s like, “We agreed to do this. Let’s have fun with it, but let’s not drag it out and bring all this drama or all that crap.” I wish all bands could be like this.

Of the other guys in the band, who’s the hardest to work with?
Stanier: That would be myself. I am my own worst enemy.
Patton: None of ‘em are really hard to work with. In the beginning I would say Stanier. But not now, not at all. Man, the guy is so solid that it’s unforgiving in a way. It’s like “No, maybe a little looser here,” and he’d look at me like I’m crazy. So me and him had a little bit of a thing, not a bad thing just like a — wow, I have to understand how this guy works. He’s hearing this stuff almost as mathematics and I don’t think that way. He’s like a fucking robot, it’s amazing. Then I thought about it like, “This guy is the backbone of Tomahawk right here.” And the backbone has to be straight. I’m used to a curved spine. It’s really refreshing.
Denison: For me it would be Patton. When left to my own devices I’m more of a minimalist and he’s more of a maximalist so we butt heads, but somehow it works. Sometimes I think a certain amount of friction is necessary to make some heat.