Back in October we heard the quaint and bluesy first taste from We the Common, Thao and the Get Down Stay Down’s forthcoming third album. “Holy Roller” was both spare and jangly, and the LP’s just-out titular single starts much the same. For “We the Common [For Valerie Bolden],” Thao Nguyen strums away on an acoustic guitar, and as some banjo plucks follow along, her rich, raw voice pulls us along like a dusty magnet.

But then in comes a bright beat and some odd synth hits, making for a truly unusual combination of folk, pop, and rock — perhaps the next logical step that Beck never took following Mellow Gold — that explodes for an anthemic, soaring chorus. “We die, we die, we die until we try,” she sings, and by that metric, she is living quite large.

We aren’t exactly sure who Valerie Bolden is, but we do hope more songs on the album are inspired by her — so far she’s killing it as a muse. We do know, however, that Joanna Newsom will be appearing on a song called “Kindness Be Conceived” (view the full We the Common track list), and that Nguyen and her band are doing a handful of West Coast in-store performances in February, followed by a full U.S. tour in March.

Thao and the Get Down Stay Down West Coast in-stores:

Thao and the Get Down Stay Down Spring tour dates: 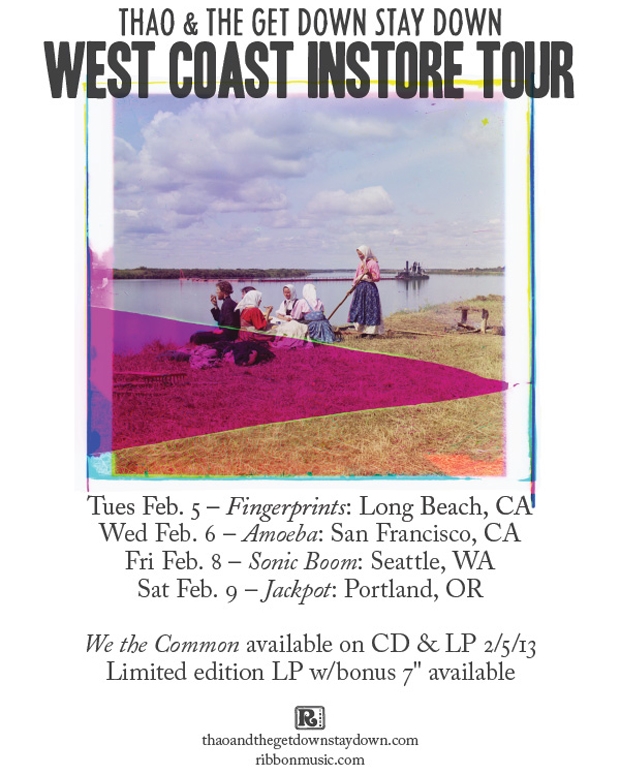 Premieres, Thao Nguyen, thao with the get down stay down