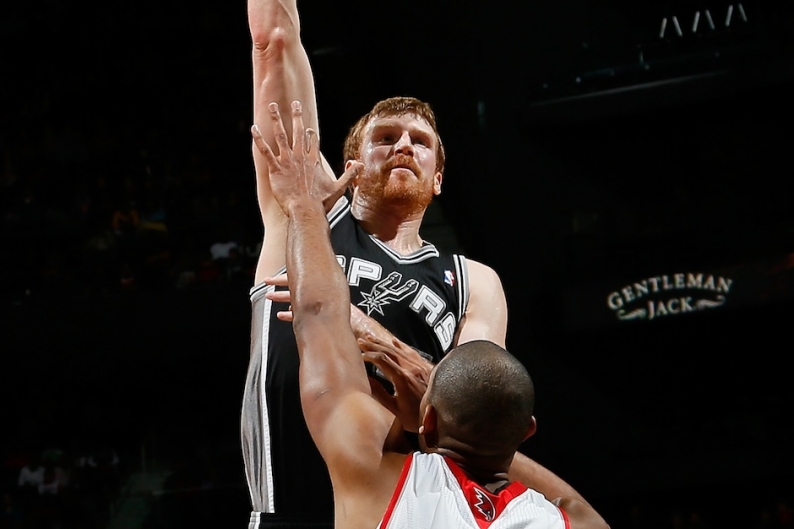 Almost halfway through the NBA season, San Antonio Spurs center Matt Bonner ranks tied at 122nd for three-pointers made with 30. Considering he is seldom used in coach Gregg Popovich’s rotation — Bonner averages just 11 minutes a game — his three-point numbers are impressive, especially for a 6’10” big man. In fact, by shooting just a shade under 50 percent (49.2 percent) on his threes, Bonner leads the league in three-point percentage among qualified shooters. While his shot isn’t as graceful as that of Steve Novak or Klay Thompson, Bonner’s prowess from behind the arc has caught the attention of one avid basketball fan, the War on Drugs’ Dave Hartley, who has since started an indie-rock campaign to get Bonner into the Three-Point Shootout during the NBA’s All-Star weekend.

Hartley — whose latest LP under the Nightlands moniker is out tomorrow — launched the Let Bonner Shoot campaign with a petition on Change.org, and fellow indie-rock basketball fans like Arcade Fire and Deer Tick have since lent their support to the cause. So why Matt Bonner? “Matt is an outsider in the NBA, someone I would always root for,” Hartley tells SPIN. “He takes public transportation to games, works his ass off for various charities and foundations (some of which he has started) and is utterly down to earth. He is a fan of rock’n’roll (and indie) music. Basically, he is a hero for someone like me. Also, I’m friends with him, so I want to see him do well.” Hartley first met Bonner through Matt’s younger brother Luke, a seven-footer who happened to catch the War on Drugs’ SXSW performance. “Luke was easy to spot, he’s seven feet tall and a true music lover. He is such a sweet guy and we became fast friends. Luke is incredibly supportive of Matt and vice versa.”

Luke Bonner has also taken up Hartley’s campaign, sending letters to get his bro in the Three-Point Shoot to NBA executive Stu Jackson. Even Arcade Fire tweeted, “There’s so much injustice in the world that we can’t do anything about, but this is something we can change. #LetBonnerShoot”

“I’m happy that Matt Bonner has galvanized some of his supporters,” Hartley says of the support his campaign has received. “He truly deserves to be in the competition — he is leading the NBA in three-point field goal percentage, and led the league last year. He is 12th all time in three-point percentage. He absolutely should be invited, and yet never has. It’s an injustice. I hope we get more and more support from various musical and basketball-related outlets and get the league’s attention.”

Part of Bonner’s success from beyond the arc is because defenses often give him wide-open looks since the opposing centers fail to protest the shot in time. The Three-Point Shootout is essentially one long wide-open look, so Bonner should excel if chosen. In a season where Ryan Anderson — a fellow 6’10” big man who leads the league in three-pointers made — and the Golden State Warriors’ Klay Thompson and Stephen Curry are all but guaranteed spots in the shootout, there are only three spots in the contest left up for grabs. The NBA might hesitate to add a little-used backup-to-the-backup center with zero star power to the All-Star Weekend event, but with your help, there’s always a chance NBA Commissioner David Stern will #LetBonnerShoot.