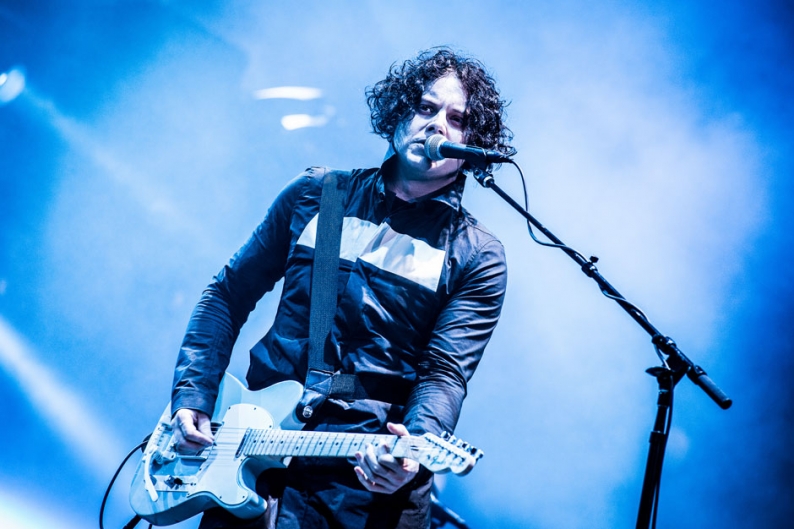 Vinyl superstar Jack White has announced the 15th entry in the Third Man Records’ rarity-excavating Vault subscribers series, and, of course, the package has an appropriately weird back story. The big get in this round of exclusives is Jack White & the Bricks: Live on the Garden Bowl Lanes, a 12″ live LP capturing a 1999 show by short-lived White Stripes-precursors Jack White & the Bricks, who performed on a stage set up over lanes 11 through 14 at Detroit’s Garden Bowl bowling alley. Pressed on (what else) “Bowling-Pin-White” vinyl, the record features White singing and playing guitar with his nephew and Dirtbombs member Ben Blackwell on drums, Ken Peyok from Waxwings and the See-See providing bass, and future Raconteurs collaborator Brendan Benson helping out with guitar.

The set — which includes future White Blood Cells tunes “Dead Leaves and the Dirty Ground,” “The Union Forever,” “Now Mary,” and “The Same Boy You’ve Always Known,” plus two Bob Dylan covers and a Meg White-dedicated rendition of “Ain’t It a Shame” by garage legends ? & the Mysterians — was committed to four-track reel-to-reel on White’s 24th birthday, July 9, 1999, by an engineer set up in lane 10. According to the statement, Garden Bowl, “the longest continually-run bowling establishment in North America,” was also “the de facto home of the then-bustling Detroit garage rock scene.” Hear a snippet of the band’s fierce version of “The Union Forever” below.

Fans can also get a peek at a pre-Raconteurs demo of the band’s trademark hit, “Steady as She Goes,” laid down by White and Benson in May 2004 at Benson’s East Grand Studios in his Detroit home. On the 7-inch’s flip side is White and Benson’s take on “The Same Boy You’ve Always Known,” hailing from 1999. Listen to a clip of that performance below as well.

Rounding out the treasure trove is the White Heat DVD, containing a travelogue of the White Stripes winter 2002 tour of Europe with Michigan three-piece Whirlwind Heat. Shot and edited by Whirlwind’s Brad Holland, White Heat promises “backstage tomfoolery, onstage pranks, the Louvre, brief insight into the malaise that is life on the road,” all adding up to “a side of the White Stripes you have never seen before along with explosive and unseen footage of Whirlwind Heat in their prime.” The film also boasts video of the Heat covering the Stripes’ “The Big Three Killed My Baby,” off their self-titled 1999 debut album, with Jack White featured on vocals. Join the Vault on Third Man Records’ website.