Who Charted? The Lumineers Hit No. 2 Almost 10 Months After Their Album Drops

Home » News » Who Charted? The Lumineers Hit No. 2 Almost 10 Months After Their Album Drops

First! Really, that exclamation point is only there for our own benefit — a futile attempt at pumping us up to run down one of the bleakest weeks in recent Billboard 200 chart history. No. 1 goes to Gary Allan, a slightly left of mainstream country sadman whose ninth album, Set You Free, moved 106,000 units (via Nielsen SoundScan). Interestingly, 63 percent of those sales were physical while last week’s chart-topper, A$AP Rocky’s LONG.LIVE.A$AP, owed less than a third of its considerable haul to CDs. Also, as we more or less predicted back then, the Harlem rapper’s LP debut took a deep dive in its second week, losing 73 percent of its sales and landing at No. 7 (38K).

2 to 10: Say what you will about the Lumineers — “At least they’re not Of Monsters and Men,” for instance — the Colorado neo-folksters have made an honest-to-goodness climb up the Billboard ladder since their self-titled debut dropped in early April of last year. The Lumineers has proven itself to be a genuine indie riser, notching a new high point this week with 50K sold and a not-to-be-scoffed-at No. 2 ranking with help, no doubt, from the group’s recent Saturday Night Live stomp-along. Their across-the-pond rivals Mumford and Sons climbed up three spots with Babel taking No. 6 this week (38K). From poplandia, Bruno Mars and Taylor Swift are still in the mix with Unorthodox Jukebox (36K, No. 8) and Red (32K, No. 9). The Pitch Perfect (44K, No. 3) and Les Miserables (27K, No. 10) soundtracks persist, too. And now Kidz Bop 23 (40K, No. 5) has compilation company courtesy of the cynically titled 2013 Grammy Nominees roundup, which debuts at No. 4 (41K).

Mackle-less, Please? Yes, Macklemore and Ryan Lewis still have the biggest song in the country with “Thrift Shop,” which has now notched two weeks at the top of the Hot 100. No, we are not happy about it, and we’d really appreciate it if you stopped bringing it up.

Back in the Closet: Justin Timberlake’s “Suit & Tie” is already out of the songs’ Top 10 after spending one measly week at No. 4. Don’t call it a comeback … because so far, it’s not. Here’s hoping that Grammys appearance will give JT the oomph he needs to bring his sexy back. 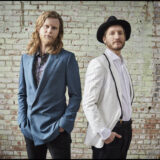 5 Albums I Can’t Live Without: Wesley Schultz of The Lumineers